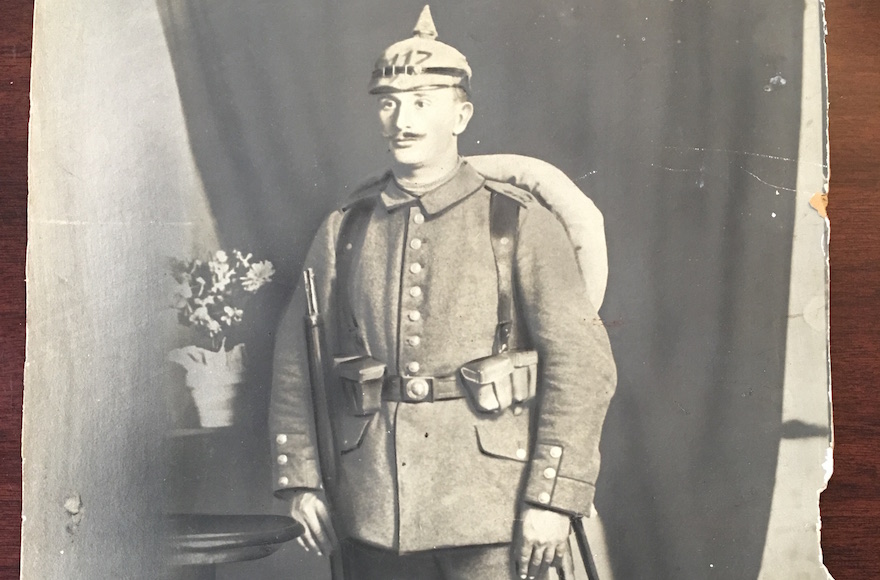 The century-old photo of Siegfried Lamm, a German soldier killed in action during World War I. (Courtesy of Noam Efron)
Advertisement

BALTIMORE (JTA) – When Noam Efron popped in to an estate sale here recently, he was hoping to purchase some watches or gold to resell in his jewelry business.

Instead he walked out with a paper treasure: a 12-by-17-inch black-and-white studio photograph of a uniformed soldier he didn’t know but realized immediately had fought for Germany in World War I. He paid $9.

Within a few weeks Efron, who had become newly fascinated by the World War I era, had identified the man and mailed the picture to the soldier’s cousin in California.

The photo was of Siegfried Lamm, a 25-year-old Jewish infantryman killed in battle on Oct. 12, 1915, near Ville-sur-Tourbe, France. He was the oldest of four children of Jacob and Giedel Lamm of Kirtorf, in Germany’s state of Hesse.

Siegfried’s younger brother Leopold moved to America with his family in 1938. Efron found the photo in the brick ranch-style home of Leopold’s son, Walter, in the basement amid a box of paperwork and bills sitting on a ping-pong table — detritus to be disposed of after everything of value was sold.

Efron, 36, of Baltimore, just happened to be driving by when he saw the sign for the estate sale.

That weekend, Efron said, he was “obsessing” over the picture, wondering about the soldier and the meaning of just why he found it. He soon returned to the home in the Pikesville neighborhood and, back in the basement, snapped photos of documents in the box seeking clues to the soldier’s identity. 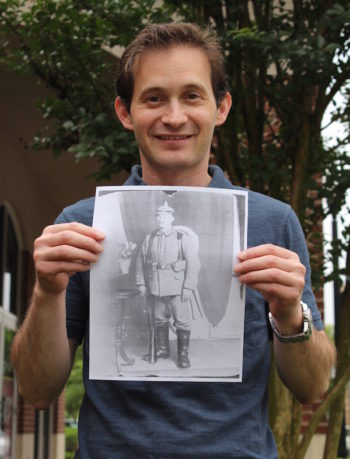 Baltimore jeweler Noam Efron holding a copy of the portrait he found of Siegfried Lamm at an estate sale for $9. (Hillel Kuttler)

Efron found envelopes addressed to Walter Lamm at the address there. He went online and located Walter’s U.S. draft records for World War II. Efron also came across a family tree, where the birth and death dates for a young German man led him to suppose that Siegfried Lamm was the soldier.

He contacted Linda Silverman Shefler, a retired interior designer in Cupertino, California, who had posted the Lamm branch of her tree – one of 17 branches she has compiled online using MyHeritage, an Israel-based genealogy company.

“I was dumbstruck,” Shefler said of receiving Efron’s email. “More than anything, I was amazed by the effort he put in to trace this picture and find me. I was very touched that he did that. He is a mensch for doing that – just something special.

“He could have kept it. But he traced the history until he found a home for it. I’m very proud to have this picture.”

Shefler had seen the image in “The Way It Was: The Jewish World of Rural Hesse,” a book published in 2000 by her late cousin, Mathilda Wertheim Stein. According to the book, Siegfried Lamm served in the 10th Reserve Infantry Regiment and was wounded by a shell in a trench. He lingered in agony for three days and begged his comrades to shoot him, which they apparently did. Perhaps to soften the blow, the official letter to the family said the shell killed Siegfried instantly.

Growing up in Rhode Island, Shefler knew nothing about Siegfried Lamm or others in the Baltimore branch of her family, which included Siegfried’s father, Jacob. In ’38, by then widowed, Jacob Lamm immigrated to the United States with Walter and Leopold; his daughter, Bertha, and others.

Siegfried Lamm is one of 21 fatalities among the “four or five dozen” of Shefler’s relatives who fought for Germany in World War I, she said, adding that their service and sacrifice belie charges at the time by some Germans that the Jews there were not patriotic.

Many of those relatives would be killed in the Holocaust, so “as much as they loved their country, it didn’t do them any good,” she said.

Besides the book, Shefler learned a bit about Siegfried by speaking with Walter Lamm several times by telephone a few years ago. As far as she knows, Walter, 90, is still living, although his wife, Edith, died in September.

Given the chance to speak with Siegfried, Shefler said she would ask how he died and inquire about “his dreams — what he wanted to accomplish and whether he was in love.”

Siegfried’s image, now contained in a frame whose decorative rivets echo his uniform’s buttons, occupies a place of honor on Shefler’s dining room wall along with her other deceased relatives.

“I keep looking at the picture in awe,” she said. “It’s something I never could have imagined having. I can preserve it and pass it down in the family. I’m happy he’s not forgotten.”

Shefler’s embrace of a second cousin, twice removed, is all thanks to the sensitivity of Efron.

Before locating Shefler, Efron considered framing the picture and hanging it in his own home. He thought better of it.

“I felt I froze time and reunited this man with his family,” said Efron, an animated and friendly man, as we met over coffee.

He marvels at the path leading to Lamm and Shefler.

His newfound interest in World War I was prompted by a photo in a book — a ditch at the Passchendaele battlefield in Belgium. It  prompted him to read more and watch documentaries.

“Maybe my whole interest in this time period,” he said, “took me to this picture.”