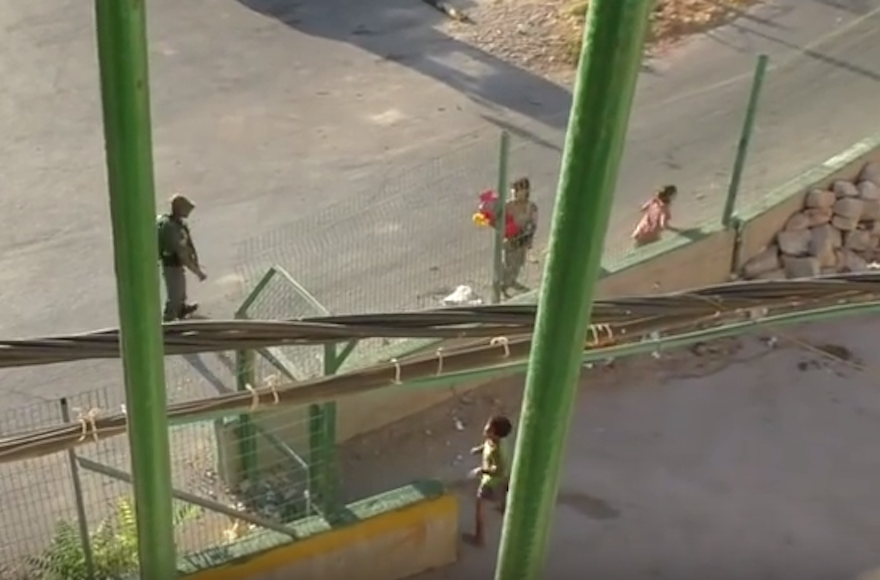 JERUSALEM (JTA) — The Israel Border Police officers caught on video taking a bicycle from an 8-year-old Palestinian girl told investigators they did so to protect her.

One of the guards was suspended from active duty on Tuesday.

The guards were questioned Wednesday as potential suspects in the incident that occurred on July 25. The video, taken by a volunteer for the Palestinian rights organization B’Tselem, was posted on Monday and has been viewed more than 180,000 times on YouTube.

The video shows one of the officers approaching the girl, identified as Anwar Burqan, on a street in Hebron, near the Cave of the Patriarchs, which is not permitted to be used by Palestinians. The girl was afraid and jumped off her bike. The officer prevented the girl from taking her bike as she ran in tears from the scene.

The video then shows the second officer dumping the bike in some nearby bushes.

According to their attorneys, the police officers told investigators that they took the girl’s bicycle to prevent her from crossing into the Jewish neighborhood, which bans Palestinians, Haaretz reported. They took the bicycle because they cannot speak Arabic and were afraid they would not get their point across. They later allowed a family member to retrieve the bike, when it was clear she would not ride it in the Jewish area.

“The main lesson to learn from this is that judging an incident purely based on a video without even the least bit of interest in the officers’ version is a vicious and ugly thing,” the officers’ attorneys said, according to Israeli media reports.

The Border Police said in a statement following the publishing of the video online that it “regrets” the incident, and that the Police Investigation Unit of the Justice Ministry will investigate.