80 years ago, Hitler kicked off the Summer Olympics 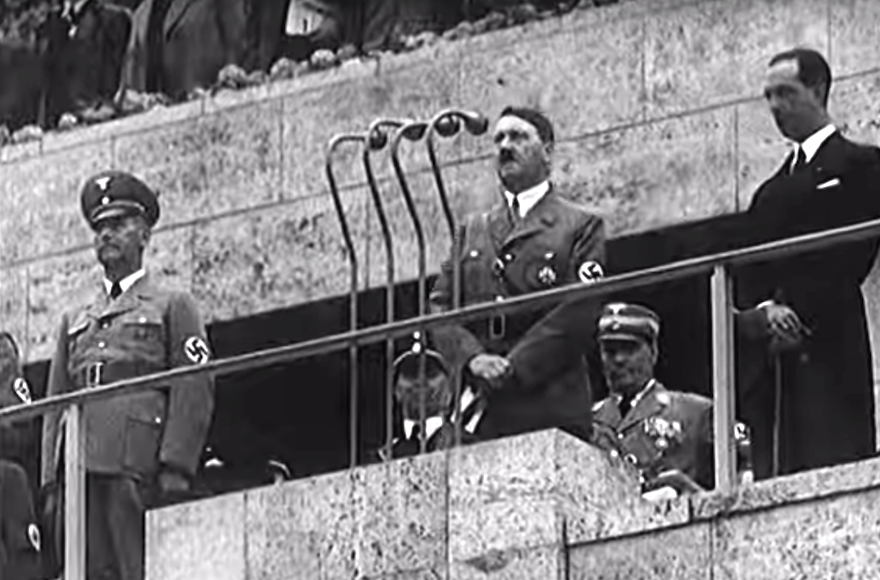 Adolf Hitler announcing the start of the 1936 Olympic Games in Berlin. (Screenshot from YouTube)
Advertisement

Samba drums, singers, dancers, bright fireworks — these things and more are expected at the opening ceremony of the 2016 Olympics in Rio de Janeiro on Friday night.

Eighty years ago, in Berlin, the games were ushered in by a different kind of spectacle — a speech by Adolf Hitler in a stadium adorned with swastika flags.

Berlin won its bid to become the games’ host city in 1931, a full two years before the Nazis came to power. But by the 1936 Olympics, Germany’s anti-Semitic Nuremberg Laws — which sought to exclude Jews from all aspects of society — were well in effect. Several countries, including the United States, considered boycotting the Olympics entirely (they ended up going).

In the end, Hitler’s opening ceremony was seen as a big success for the Nazi propaganda machine. In the above footage from the ceremony, made available by British Pathé, athletes from dozens of countries march and salute Hitler. Pigeons “carrying message of peace to the world” are released to the sky. And the first-ever Olympic torch relay — which, weirdly enough, was Hitler’s idea — is finished by a blond German runner.

In addition to enjoying Friday’s colorful opening ceremony in Rio, we can now relish another thought: The world has come a long way.

From the Archive: Hitler’s other Olympics