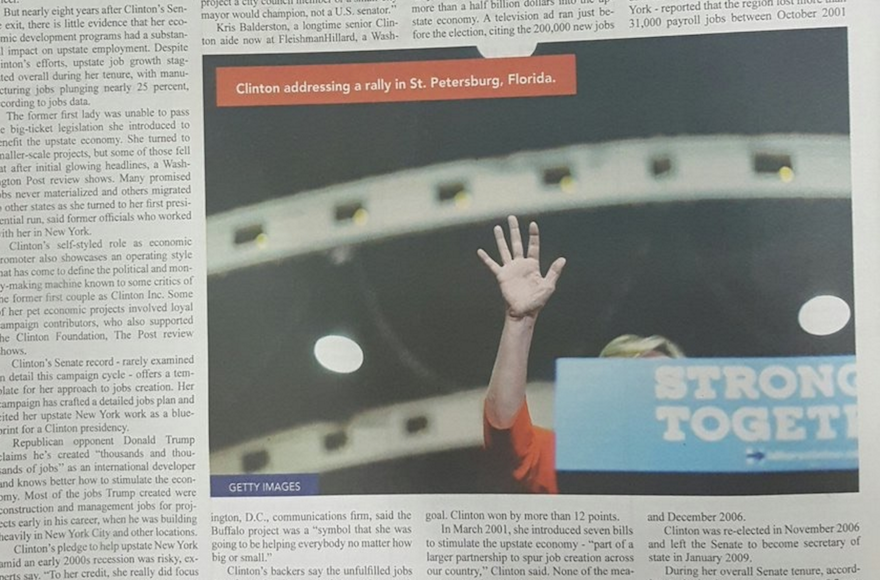 (JTA) — A haredi Orthodox newspaper that bans photographs of women on its pages earned praise and scorn for publishing a photograph of Hillary Clinton — or at least her arm.

Yated Ne’eman, a newspaper based in Monsey, New York, that serves the area’s large fervently Orthodox community, published a picture of the Democratic presidential nominee taken at a Florida campaign rally.

Clinton’s face, however, was completely covered by her podium.

“History is made as Yated Ne’eman publishes a picture of Hillary Clinton, a woman! Well almost,” wrote OnlySimchas.com, an Orthodox dating website, in an item widely shared on Facebook.

“This is disgusting,” a woman wrote on the Jewish Orthodox Feminist Alliance Facebook page. “I cannot even entertain any reasoning” why a women’s face could not be seen.

Haredi Orthodox publications often ban images of women, especially their faces, in what editors describe as reasons of tradition and modesty. The ban is applied to all women, including world leaders and major public figures like Clinton.

“It’s not just her politics that worries these publications, although they are far to the right of Clinton on most issues,” Columbia University journalism professor Ari Goldman wrote last year in The Columbia Journalism Review. “More troublesome is her gender.”

One editor told Goldman that a Clinton victory in November might force papers to change the policy.

“I think we’re going to have to rethink it,” Rabbi Yitzchok Frankfurter, the executive editor of Ami Magazine, told Goldman. Not to do so, he said, “would be disrespectful.”

Last year, the Washington Post noted when the haredi Orthodox Israeli newspaper HaMevaser blurred out women world leaders in a photograph of a solidarity parade in Paris following the Charlie Hebdo terrorist attack.