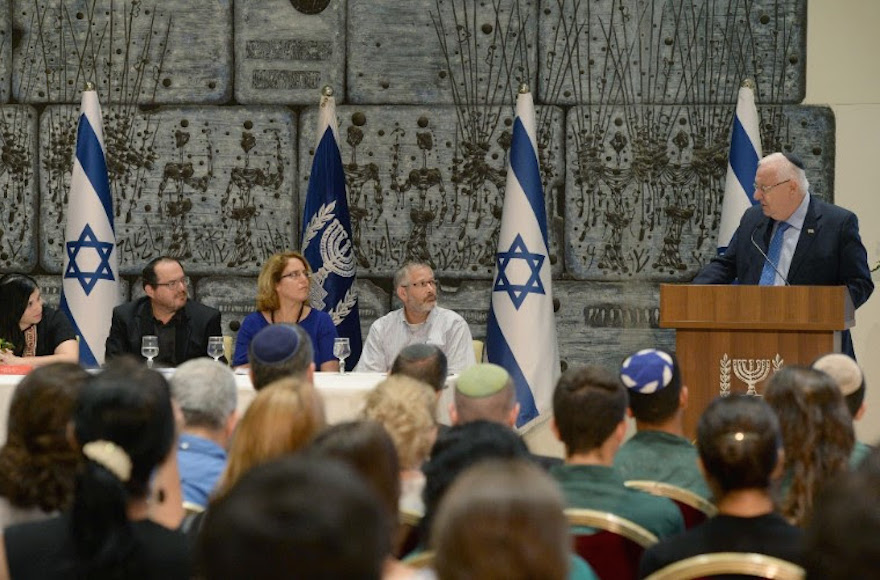 (JTA) — President Reuven Rivlin of Israel marked the forthcoming fast of Tisha B’Av by hosting a study session for Jews of various streams.

The event at the presidential residence in Jerusalem included leaders of the Reform movement’s Hebrew Union College, the Conservative movement’s Schechter Rabbinical Seminary and the Himmelfarb High School, an Orthodox public high school in the Israeli capital.

It was the second year in a row for the event, which comes on the eve of the day of fasting commemorating the destruction of the Holy Temple in Jerusalem and other tragedies in Jewish history. Tisha b’Av begins at sundown Saturday.

In his remarks, Rivlin referred to a tradition that says the Second Holy Temple was destroyed as the result of sectarian discord among Jews.

“The sectarian picture of the world in the final days of the Second Temple disturbs me greatly,” he said. “Disagreements must be held with respect, with persistency and with attention, and never with flippancy or hypocrisy. I hope that if we learn this lesson, to be honest with those who share our covenant, with those with whom we have disputes, then we will be able to overcome sectarianism before it overcomes us.”

While Rivlin, a member of Likud, is widely regarded as a staunch defender of democratic norms and civil liberties, he was criticized early in his term for not supporting official Israeli recognition of non-Orthodox streams of Judaism.

The event was held in partnership with the Jewish People Policy Institute and its Pluralism Project.