Fasting in the lands of the midnight sun 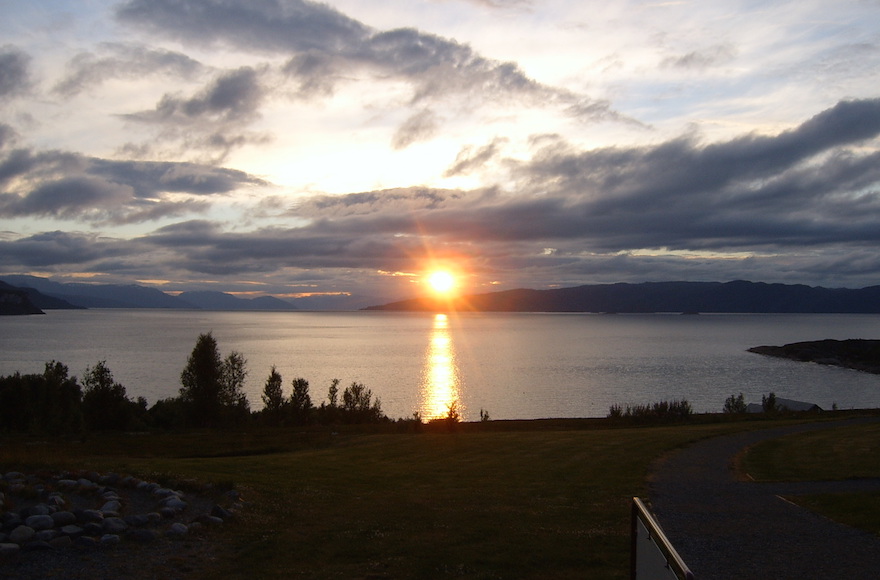 Summer days are remarkably long in Northern Europe, as seen here at the Altafjord in Alta, Norway. It's great for travelers but not necessarily for Jews fasting on Tisha b'Av. (Wikimedia Commons)
Advertisement

AMSTERDAM (JTA) — Though the summer season in Northern Europe may be brief, summer days here can seem endless because of how late the sun sets.

In the Norwegian capital of Oslo, for example — which has a latitude that’s just 4 degrees south of Anchorage, Alaska — the summer solstice in late June brings almost 19 hours of daylight. By mid-August it drops to 15 hours, 36 minutes — nearly two full hours longer than in New York.

This is good news for hikers and sun-starved Scandinavians — after all, a feature of Oslo’s bitterly cold winters are the punishingly long hours of darkness.

But the long days come with their own challenges for Northern Europe’s observant Jews and Muslims, who on some days fast according to when the sun rises or sets. That will be the case for Jews on Tisha b’Av — an annual day for mourning the destruction of the Jewish Temple that this year begins at sunset Saturday and continues until nightfall the following day.

“It’s by far the hardest fast of the year because of the long daytime and the heat,” said Yanki Jacobs, a Chabad rabbi in Amsterdam, where sunset will end after 10 p.m. next week.

“If it definitely makes a difference if you can eat at 8 p.m. or at 11,” said Jacobs, who also confided that he is hoping for a cool, rainy weekend because “it’s harder to fast when it’s warm.”

Rabbi Joav Melchior, the chief rabbi of Norway, concurs with Jacobs’ view of Tisha b’Av as the toughest fast of the year.

“In principle it shouldn’t be more difficult to fast in summer because ‘yom tov’ [Hebrew for ‘holiday’] also enters late,” said Melchior, who grew up in Israel.

But in practice, “it feels much longer in the north because sunsets, which in Israel take about 20 minutes, stretch on for hours in Norway,” he said.

In the Netherlands, where dinners are typically eaten at the relatively early hour of 6 p.m., many Jews are used to turning in long before Tisha b’Av begins — leaving them the option of either staying up late to fill up on food or fast for well over 24 hours.

In this regard, Scandinavia’s observant Jews are in the same boat as its observant Muslims, who languish until later at night whenever the month of Ramadan, when Muslims may only eat and drink after dark, falls during the summer.

But a long day is only part of the reason that the Tisha b’Av fast seems more difficult than the one on Yom Kippur, the Day of Atonement for Jews, which occurs in autumn, according to Melchior.

“On Yom Kippur, you spend the whole day in shul, praying, thinking, reflecting with others,” he said. “You don’t even realize you’re fasting because you have so many other things on your mind.”

But Tisha b’Av is “far less central” a holiday for Norwegian Jewry, which “means you spend a lot of time alone, fasting in your own house and ending up noticing that, hey, you’re actually fasting and can’t eat or drink.”

In Norway, government rules about holidays don’t exactly encourage fasting on Tisha b’Av, according to Melchior.

“Non-Christians are entitled to two free days annually by law, when Judaism has six to eight days when work is not permitted,” he said.

While many employers allow observant Jews and Muslims to take off extra days out of consideration for their faith, most reserve those days for holidays seen as more religiously significant.

According to Jacobs, in the Netherlands, public awareness about Ramadan, when employers often take their Muslim employees’ needs into consideration even when it’s not legally required, has also increased awareness of Jewish fasting days.

But this is not a development felt by Melchior in Oslo.

“More often,” he said, “the reaction in Norwegian society to the Jewish fast days is: ‘What, you guys fast, too?'”