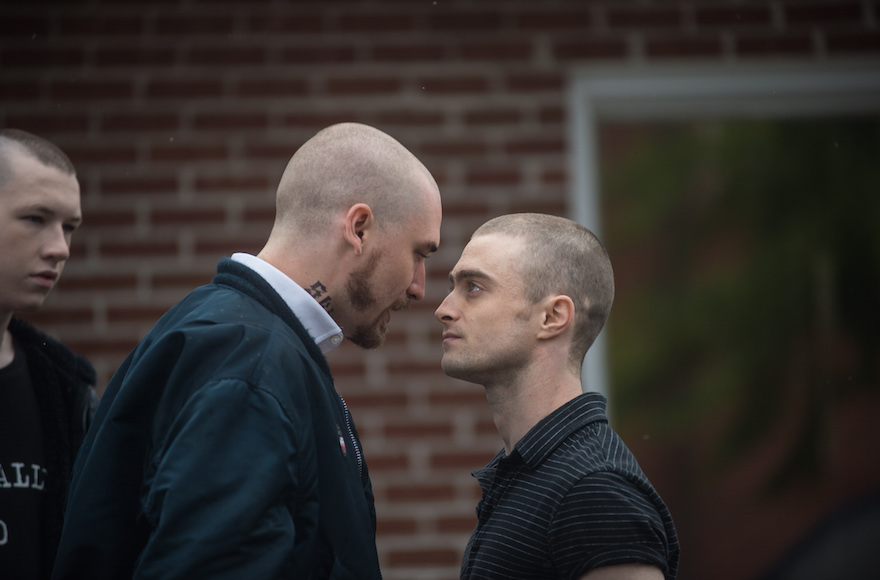 Daniel Radcliffe, right, in a scene from "Imperium," in which he plays an FBI agent going undercover as a neo-Nazi. (Lionsgate Premiere)
Advertisement

The film, which opens Friday, is taut and exciting. It is also a movie the former “Harry Potter” star doesn’t want his 93-year-old Jewish grandmother to see. (More on that later.)

“Imperium” is loosely based on the experiences of FBI agent Mike German, who spent 16 years with the bureau, a dozen undercover. German co-wrote the screenplay with director Daniel Ragussis.

Both Daniels are on the phone to promote the enterprise, one definitely more tired than the other.

Radcliffe’s critically acclaimed, sold out off-Broadway play “Privacy” had closed the night before, followed by an apparently lengthy closing night party. But despite the joking promise that his exhaustion might lead him to reveal something juicy — “You never know what I might say” — Radcliffe stays on message, painting a self-portrait of an intelligent young actor who has survived fame without a semblance of pretense or affectation.

On the face of it, Radcliffe does not seem the obvious choice for the role. For one thing he’s a Brit, though you couldn’t tell by the mid-American accent he adopts for the film. And for another, he doesn’t fit the burly Jason Bourne tough guy image we’ve come to expect from our movie heroes. But that’s exactly what led Ragussis to cast Radcliffe.

“When I first met Michael German, he was so different from the prototype FBI agents,” Ragussis said. “He was very intelligent, a soft-spoken guy who studied philosophy in college. I spoke to him and said you’re not what I expected.

“He told me being an FBI undercover agent isn’t about physical powers but social skills, dealing with people, and once I realized that it enabled me to conceptualize the story and turned me on to an actor like Daniel.”

In fact, Radcliffe’s relatively small stature — he is listed as being 5-foot-5 — only ratchets up the tension as Nate Foster is forced to use intelligence to ingratiate himself within various extremist groups and maintain his cover.

Radcliffe’s nuanced performance as an agent with no field experience who has jumped into potentially volatile waters without a life vest almost certainly will win critical raves. His character must do battle not only with the Nazis and Klansmen, but his own superiors, who at a critical juncture want to pull him out, believing he is on the wrong track.

Radcliffe said he “was lucky to have Dan here with me.”

“He did an unbelievable amount of research, so I had him to go to as a source,” said the actor, who added that he prepared for the film “like any other role.” Radcliffe also consulted German, read books and went “online to look at terrifying message boards.” 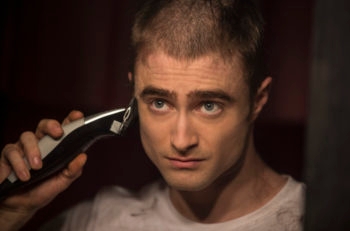 Daniel Radcliffe in a scene from “Imperium.” (Lionsgate Premiere)

He also shaved his head on screen, wore Nazi regalia and of course offered the Nazi salute. That brings us back to grandma.

Radcliffe said his maternal grandmother — he never knew his granddad — “was an evacuee during the war,” taken to the country to stay with people away from Nazi bombers. He recalls her telling him stories “about how our family came to the UK and where we came from.”

“We originated in Russia and left because of the pogroms. I don’t know if the story is true, but supposedly my great-great-grandfather was on a ship from Russia bound for America. It stopped off in London, and he thought, ‘oh, that was quick’ and got off. He went to work in a textile factory and married the owner’s daughter.”

Radcliffe was raised in a very secular environment — “I’m going to be a real disappointment to you,” he told a reporter for a Jewish news service — but with a keen awareness of his Jewish background and “what it means to my mom and her mom.”

It is the reason he believes “Imperium” will not be appropriate for grandma.

“It may be a little too close to the bone,” Radcliffe said. In fact, he thought about her during the filming, “about how odd it is. The strangeness of it struck me a few times.”

Radcliffe finds it impossible to define how his Jewish heritage impacts his work.

“I don’t think I can separate the various parts of my life,” he said. “But the view that was always imparted to me by my mom and [Irish] dad is that the Jewish people and the Irish people were hard workers, that the Jews always punched above their weight class intellectually in terms of their numbers of people. I know that influenced me I suppose on some level, gave me a sense of responsibility to continue that. It’s something I thought about. I wouldn’t say it’s a driving force, but it is an influence.”

“The gun thing is alien to me,” Radcliffe said. “But I don’t think I was in Virginia” — the film was shot in Hopewell, a small city south of Richmond — “for more than a day before three separate people said, ‘hey, you’ve got to come shoot with us.’ I’m up for anything and I had a lovely day, but that’s never something I’m going to get used to.

“But the thing that most surprised me is that there is a huge wave of people who are not the slightest bit racist, who are highly intelligent and who love guns. The image that is sometimes portrayed the world over is that the Second Amendment people are sort of crazy, and I haven’t found that to be the case.”

Another American subject — how we seem to allow young actors a moment of fame and then chew them up — also brought out Radcliffe’s positive side. He said he had people around him “who were never going to allow me to become arrogant or obnoxious. But I have to say it’s very human to focus on the negative.”

Like them, Radcliffe has literally grown up in front of us, although to a degree none of them could match: He starred in eight “Harry Potter” films in 11 years, starting at age 11 and finishing at 21. While one of the rules for this interview was no questions about the new “Harry Potter” play and book — Radcliffe had nothing to do with either — the old films were not out of bounds, And, no, there are no regrets.

“There has never been a moment where I wish it hadn’t happened, any mistakes I’ve learned from,” he said. “Nobody’s life is all rainbows and sunshine. There were moments, but mostly related to being a teenager.”

Still, Harry Potter will always be with him. Even today, five years after the last film was released, a writer who shall remain nameless will talk about his granddaughter Samantha, who is a big fan and celebrating a birthday and can Daniel send a photo? Of course, he can — a promise stars make all the time but seldom deliver. 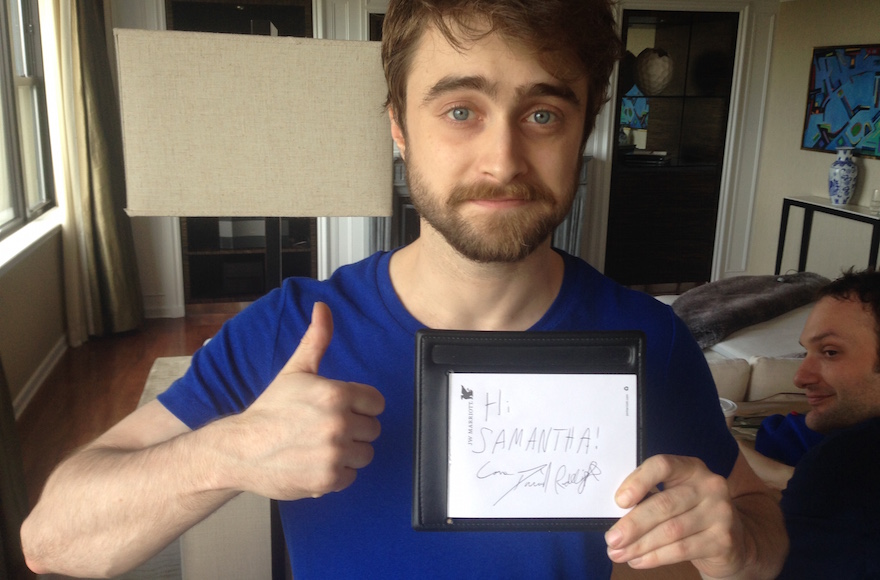