Why Tim Kaine, Clinton’s VP pick, is good for Israel and Jewish values 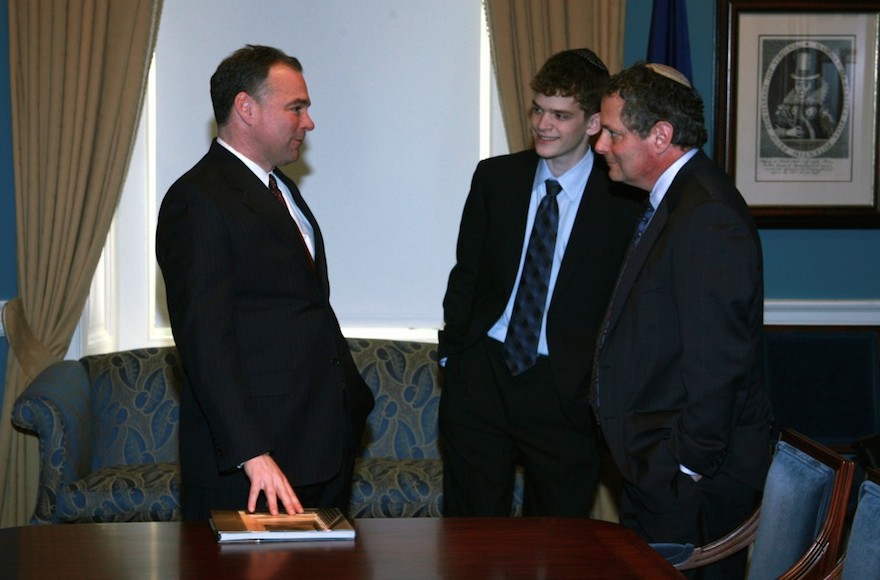 The Clinton-Kaine ticket promises to build upon a strong tradition of Democratic leadership, while the Republicans’ ticket of Donald Trump and Indiana Gov. Mike Pence offers a reckless and dangerous blend of empty rhetoric and inconsistent positions that should alarm all Americans, particularly American Jews.

Clinton has deep knowledge of the history of the Middle East and a proven record of engaging with the leaders and peoples of this complex region. She also has a record advocating for U.S.-Israel ties in the Senate and hands-on experience managing the relationship as secretary of state.

In contrast, Trump’s shocking inexperience and wild pronouncements, including suggestions that he would abandon commitments to key U.S. allies, has earned unprecedented repudiation by foreign policy experts across the political spectrum.

The distinction between the two parties’ vice presidential nominees is just as stark.

Take social justice issues. Pence’s long-held positions on issues such as reproductive freedom, fair and balanced immigration reform, environmental protection, civil rights and LGBT rights place him far to the right of the American Jewish mainstream — and to Kaine, a lifelong progressive who has fought for equality and justice throughout his career in public service.

On Israel, Pence is quick to profess his support for the Jewish state. But stated support alone is not sufficient.

What matters in these dangerous times is a mature, deep understanding of the challenges facing Israel as it seeks avenues for peace with security. And what matters are ongoing, real-world ties to the Jewish community in this country and the leadership in Jerusalem. Kaine, who proudly identifies as a “strongly pro-Israel Democrat,” has demonstrated both throughout his career. 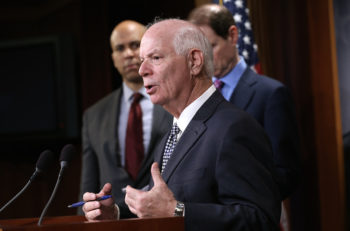 Kaine serves on the Senate’s Foreign Relations Committee, its subcommittee on Near Eastern and South and Central Asian affairs, and the Armed Services Committee, positions that give him a leadership role and a comprehensive understanding of fast-changing conditions across the region.

As the ranking member of the Foreign Relations Committee, I have a front row seat to Kaine’s thoughtfulness, inquisitiveness and mastery of the complex issues facing the United States, Israel and our allies and partners.

He has had meetings with Prime Minister Benjamin Netanyahu, traveled to Israel and visited an Iron Dome battery on the border with Gaza. He has stood up time and again for Israel in Congress, from emergency funding for its successful anti-rocket system to the U.S.-Israel Strategic Partnership Act of 2015.

Kaine was vocal in condemning the United Nations Human Rights Council for its decision to launch a one-sided investigation into Israel’s actions during the 2014 conflict in Gaza while ignoring the unprovoked rocket attacks against Israeli civilians by Palestinian terrorists that touched off the conflict.

Kaine knows that protecting Israel’s security also means ensuring that Israel has a healthy economy. As governor of Virginia, he worked closely with the Israeli Ambassador to the United States at the time, Sallai Meridor, resulting in a 2008 agreement to strengthen bilateral cooperation between Virginia and Israel on private sector industrial research and development. For Israel, the agreement was only the second it had ever entered into with a state government, and both parties have seen tangible benefits.

A nuclear-armed Iran would represent an existential threat to Israel, and Kaine has been a key leader in bipartisan efforts to ensure that Iran never acquires a nuclear weapon. He negotiated the Iran Nuclear Agreement Review Act that ensured Congress could review the nuclear accord and advocated for a resilient and fully resourced U.S. military so that “all options are on the table.”

Kaine knows that the threats emanating from Iran are about more than its nuclear program. Iran’s continued ballistic missile testing and state sponsorship of terrorism are equally troubling and threatening to Israel. He worked on a bill with Sen. Chris Murphy, D-Conn., to extend sanctions on Iran until President Barack Obama and the IAEA can guarantee that Iran’s nuclear material is for peaceful purposes.

Finally, Kaine understands that support for a safe, secure Jewish state goes far beyond easy slogans and reflexive criticism of its many foes. Farsighted U.S. diplomacy is critical in helping Israel reach its goal of a sustainable, secure peace. Like a strong majority of American Jews, Kaine remains committed to a two-state solution that has been the stated policy of Prime Minister Netanyahu and every recent Israeli government before his, and which is the critical prerequisite to the kind of peace that Israel’s citizens deserve and want.

Kaine understands that tough talk about Israel’s security is just that – talk – if not built on a foundation of active support for U.S. peacemaking efforts in the troubled region.

Close to home, it was Kaine who held the first Passover seder in the Virginia governor’s mansion. He has a long record of working closely with Virginia’s small but active Jewish community.