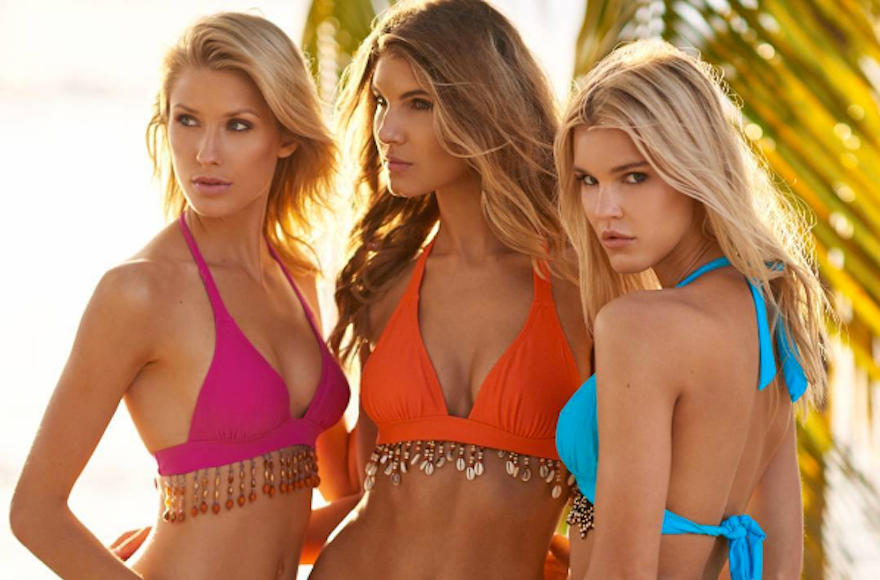 Hasidic Jews and bikinis don’t normally end up in the same sentence together. The modesty rules that govern the Hasidic lifestyle typically forbid men from being around or even looking at scantily clad women.

So how did two Hasidic men start their own bikini company?

The story of Barry Glick and Saul Samet — the founders of the Beach Gal swimsuit company, as chronicled in Racked — is revealing in more ways than one.

About four years ago, Glick, a 30-year-old father of five who lives in the heavily Orthodox neighborhood of Borough Park, Brooklyn, was working at a store selling custom bekishes, or the long black coats worn by Hasidic men on holy days. He came up with Beach Gal’s signature idea — a bikini with a detachable fringe or string of sea shell beads — during his long commutes to the bekish store in New Jersey. He was fascinated by billboards for Pandora jewelry, which allows customers to choose their own charms.

“I don’t know how in the world I came to it but one day I thought, ‘maybe there could be a bikini that would work with such a concept,’” he told Racked.

Glick took his idea and teamed up with Samet, a Borough Park neighbor who provided the company’s initial investment. Samet had a connection to Cynthia Riccardi, the designer behind the popular Cyn & Luca swimsuit brand, who helped the duo finalize their designs and guided them to high quality fabric producers in South America.

Since then, according to Racked, Beach Gal has garnered positive reviews on Amazon and sold most of the 2,500 pieces from their initial production run. Their suits, which sell for around $150, feature detachable beads, sequins and ruffles. None falls under the category of modest clothing or swimwear (for proof, check out their look book).

So while the Hasidic pair is confident in their product, they are, unsurprisingly, nervous about how it might be perceived in the Orthodox community. They refused to have their pictures taken for the Racked article and said they aren’t “shouting it in the halls.” Samet said he hasn’t told his in-laws about the new company (but he noted that his wife is fully supportive of the project).

The other irony here, as Racked points out, is that Hasidic men aren’t exactly fashion mavens — they tend to exclusively stick to wearing black suits and white shirts.

However, for Glick at least, the inspiration could have been familial. His mother works at a clothing shop featuring modest attire and his grandmother has owned a fabric store for about 30 years. He says two of his three sisters are “quite fashionable.”