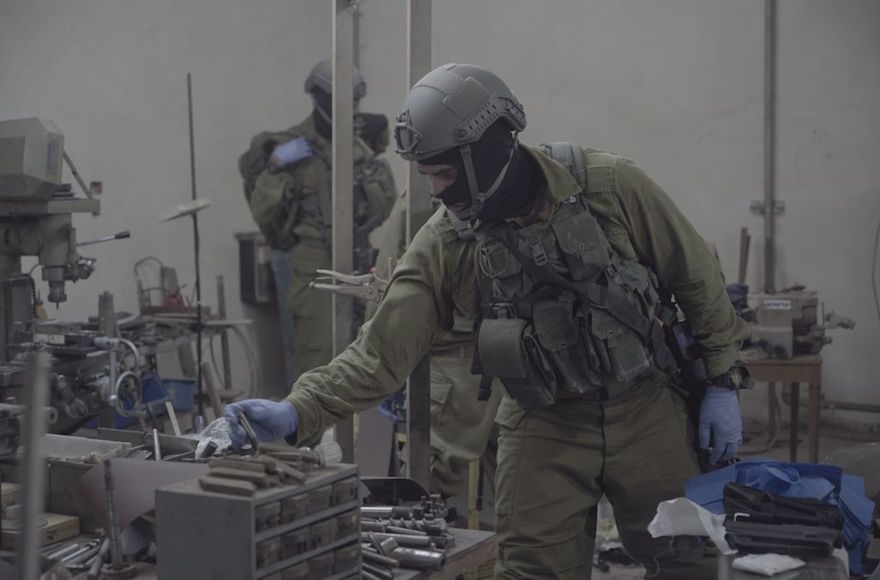 JERUSALEM (JTA) — Israeli security forces shut down six illegal weapons manufacturing factories in the West Bank in what the army said was the biggest such operation of an ongoing crackdown.

“Last night, after research and analysis, we decided to clamp down on several warehouses and factories that manufacture guns and arms,” a senior army officer told JTA and other journalists in a briefing. “From six of these seven warehouses we found advanced weapons technology.”

Fifty-four weapons were seized, along with gun parts and 22 lathes. Two suspects were arrested, including a major arms dealer, according to the IDF.

The army has been targeting weapons production, dealing and possession in the West Bank amid a wave of Palestinian violence against Israelis that started in October but has slowed in the past several months.

More than 140 arms manufacturers and dealers have been arrested, 49 weapons production machines and 29 factories shut down, and over 300 weapons confiscated since October, according to the IDF. Each factory typically houses one or two production machines, though sometimes there are more, the senior officer said.

“The IDF will continue to decisively act against the production infrastructure and trade of weapons and thwart terrorism,” the IDF said in a statement. 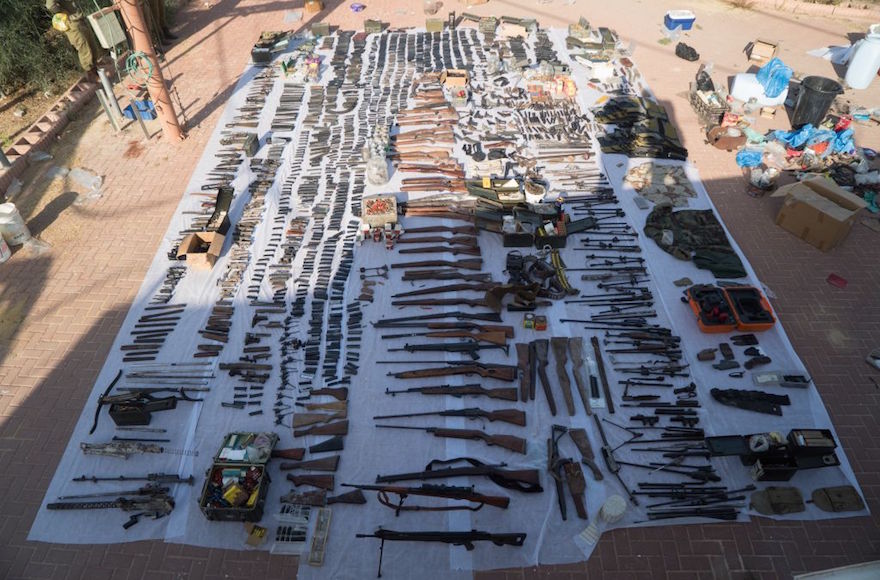 The Israeli army believes there are hundreds of factories, many in garages and homes, and thousands or tens of thousands of illegal weapons on the streets of the West Bank. A single factory can produce up to dozens of weapons a day, according to the senior officer. Only Palestinian security personnel may legally possess weapons.

While eradicating illegal weapons in the West Bank is not feasible, the army said it seeks to make them harder and more expensive to acquire. Palestinians currently can buy a homemade Carlo Gustav submachine gun for less than $1,000. A Carlo, as it is known, was among the guns seized Monday, along with 39 pistols, six sniper rifles, four hunting rifles, two flare guns, a pellet gun and a shotgun, the army said.

“The main thing we try to do is stop the situation where every 15-year-old can put his hands on a gun and murder civilians,” the senior officer said.

The Carlo has been used in the majority of shooting attacks on Israeli civilians and security personnel since the “lone wolf intifada” began. More than 30 shooting attacks have been carried out this year with illegal weapons, according to the IDF. Notably the Carlo, which is inaccurate with limited range, was used by two Palestinian cousins in June to shoot up the Max Brenner cafe in the popular Sarona outdoor shopping center in central Tel Aviv. Four Israelis were killed and several seriously injured in the terrorist attack.

Thirty-five Israelis and four foreign nationals have been killed in Palestinian stabbings, car rammings and shootings since October. At least 214 Palestinians have been killed, some two-thirds of them during attacks and the rest during clashes with troops, according to the army.

Frustrated or unstable Palestinians, most of them young men, are conducting independent attacks because the army has successfully dismantled the terrorist organizations that once operated in the West Bank, the senior officer said.

The army has developed its capabilities to clamp down on illegal weapons in the West Bank in response to their use against Israelis. Weapons are also smuggled from Jordan and stolen from Israeli army bases, the senior officer said. As yet, the army is not aware of any rockets manufacturing in the West Bank, as happens in the Gaza Strip, but has thwarted past attempts by terrorist organizations to start, he said.

In recent weeks, the Palestinian Authority also has conducted operations against illegal weapons in the areas of the West Bank under its control. The weapons are mainly used in crime and conflict between Palestinian clans and, in most cases, terrorists use weapons they or family members already own, the senior officer said.

Asked about security coordination, the senior officer said the Palestinian Authority, which governs much of the West Bank, acts according to its own interests. But he said the army is supportive of the P.A.’s efforts and believes reducing the number of illegal weapons held by Palestinians serves both sides.