Hamas, natural gas and other good reasons Israel and Turkey should stick together 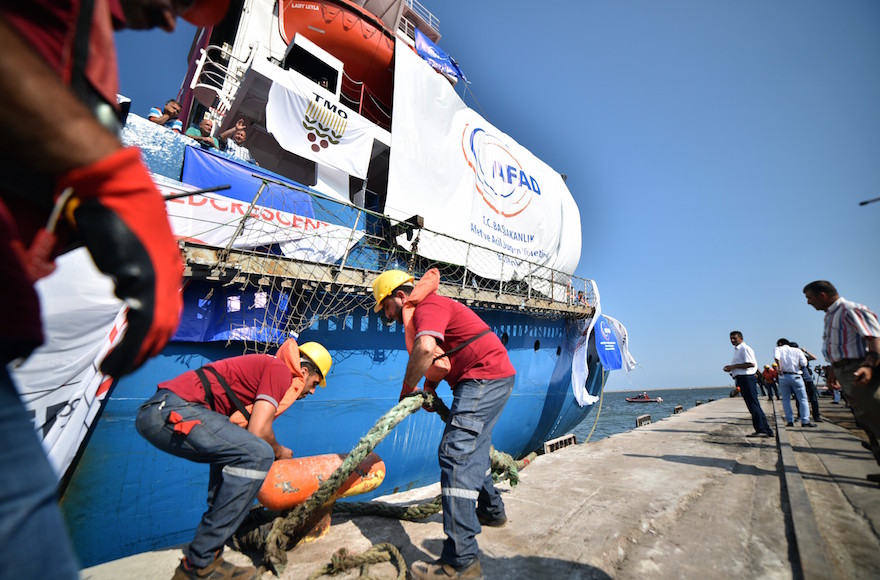 JERUSALEM (JTA) — Israel and Turkey ought to be friends, geopolitically speaking.

As Turkish President Recep Tayyip Erdogan put it in January: “Israel needs a country like Turkey in this region. We, too, should admit that we need a country like Israel.”

But the regional powers often can’t seem to make it work.

In 2010, Turkey cut ties with Israel over its deadly military raid of the Gaza Strip-bound Mavi Marmara flotilla. And this week, days after the Turkish parliament approved a reconciliation agreement to restore bilateral relations with Israel, the states traded recriminations over Israel’s bombardment Sunday of Hamas targets in Gaza.

Yet if Israel and Turkey can keep from quarreling, they each have much to gain.

“The situation for the past six years wasn’t good for either of us, Turkey or Israel, and eventually everyone realized we should repair the damage. So that’s what happened,” David Kushner, professor emeritus of Middle Eastern history at the University of Haifa, told JTA. “I think most people actually welcome this new phase. It may not bring back the intimacy of the past, but both countries realize their interests are common, and that’s what counts in international relations.”

Israel and Turkey are to exchange ambassadors in the coming days, as per the reconciliation deal. Here are three good reasons they shouldn’t bring them home and return to their standoff anytime soon.

The main source of tension between Israel and Turkey is also perhaps their best opportunity for collaboration: Gaza. Under the reconciliation deal, reached and approved by Israel’s security cabinet in June, Israel didn’t lift its naval blockade of the territory, as Turkey had demanded, but it did promise Turkey would be allowed to provide overland support to the coastal strip.

Israel met Turkey’s two other longstanding demands as well. The state paid $20 million to compensate the families of the nine Turks killed by Israeli soldiers aboard the Mavi Marmara. And Israeli Prime Minister Benjamin Netanyahu apologized to Erdogan in 2013, under pressure from President Barack Obama.

In return, Turkey pledged under the deal not to allow Hamas to conduct terrorist attacks from its territory, to do what it can toward the return of the bodies of Israeli soldiers and civilians held by the Islamist terrorist group, and to pass a law ensuring Israeli soldiers are not sued for their role in the Mavi Marmara raid.

Erdogan has long been a prominent champion of Hamas and critic of Israel’s policy toward the Palestinians. He was to visit Gaza in 2013 until Egyptian President Abdel Fattah al-Sisi’s seizure of power derailed the plan. Hamas, which vows Israel’s destruction, has headquarters in Istanbul and receives funding from Turkey. Erdogan called Israel a “terror state” in a 2009 CNN interview.

“The Turkish public’s empathy for the Palestinians, Erdogan’s Muslim identity, the fact that he sees Hamas as legitimate, the almost inevitably harming of civilians in conflicts in Gaza: All these are puzzle pieces that come together to make it hard for Erdogan to resist criticizing Israel on this issue,” Gallia Lindenstrauss, a Turkey researcher at Israel’s Institute for National Security Studies think tank, told JTA

With Israel on guard against Hamas — not to mention its control of  the West Bank — there wouldn’t seem to be much basis for Israeli-Turkish cooperation on the Palestinian issue.

But Israel apparently has determined not to seek Hamas’ overthrow, fearing its government would be replaced by something worse. Instead, Israel has fought to blunt the military threat from Hamas while trying to provide the group with enough incentives to stave off the next conflict. Even hawkish Defense Minister Avigdor Liberman, who opposed reconciling with Turkey, voiced support for rebuilding Gaza’s economy and infrastructure.

Both sides have an interest, then, in provisions of the reconciliation deal that allow Turkey to provide humanitarian aid, as long as it goes through Israel’s Ashdod port, and to help build infrastructure in Gaza — including water and desalination plants and a hospital.

“Last year, war broke out partly because Hamas had nothing to lose,” Dror Zeevi, professor of Middle Eastern studies at the Hebrew University of Jerusalem, told JTA. “It’s believed that’s why Hamas opened hostilities against Israel or allowed things to deteriorate. Turkey might be a solution to that problem.”

At the same time, Gaza remains a potential flashpoint between Israel and Turkey. Another major incident like the Mavi Marmara raid could blow up rapprochement.

Israel is sitting on hundreds of billions of dollars worth of natural gas reserves, according to officials. And Turkey is in the market for the fossil fuel. Although the reconciliation deal did not deal with gas, the issue was in the air during negotiations.

Netanyahu has said restoring relations with Ankara is key to unlocking his country’s recently discovered gas bounty, and bolstering its political and economic position. A pipeline through Turkey could open up an export market for Israel there as well as in Europe.

“This is a strategic matter for the State of Israel,” Netanyahu said in announcing the signing of the reconciliation deal last month. “This matter could not have been advanced without this agreement, and now we will take action to advance it.”

Turkey has been more circumspect.

“Firstly, let normalization begin, and after that, the level to which we cooperate on whatever subject will be tied to the efforts of the two countries,” Turkish Prime Minister Binali Yildirim said last month. “There is no point in talking about these details now.”

But Turkey has long sought to reduce its energy dependence on Russia, from which it gets most of its natural gas. Turkey and Russia’s falling-out over the Turkish downing of a Russian warplane in November likely provided additional motivation. Russia retaliated to that incident by canceling plans to build a gas pipeline through Turkey, though relations between the countries quickly improved.

“Both leaderships [Israel and Turkey] have put the gas as an important issue on the agenda. Turkey doesn’t like that it’s so dependent on Russia,” Lindenstrauss said. “There is an interest [in the pipeline for Israeli gas], but will it translate into reality? This I’m less certain of.”

Even without a pipeline, reconciliation should help promote trade between Israel and Turkey, which despite tensions has grown in recent years.

Cooperation against the chaos

The Arab Spring of several years ago upended the Middle East and North Africa, leaving Turkey with few friends and Israel with ever-more unpredictable enemies. The states are better off confronting the myriad challenges of the region in collaboration than at cross purposes. Awareness of this fact likely helped drive reconciliation.

“There isn’t much reason to be optimistic about a settlement in Syria anytime soon,” the University of Haifa’s Kushner said. “In the meantime, Turkey does what she thinks is right for her, and we in Israel do what we think is right for us. But there is a common interest between Turkey and Israel to be able to coordinate things when we need to, which I think was a reason we got reconciled.”

Israel has seen some benefits from the Arab Spring. The threat from the Syrian army was eliminated, and Sunni Muslim states, notably Saudi Arabia, proved more open to cooperation against the rise of the Islamic State and Iran.

But new potential threats have emerged, too. Hezbollah fighters, busy propping up Syrian President Bashar Assad for now, have become battle hardened, and the Shiite terrorist group has stockpiled some 120,000 missiles, compared to 7,000 some 10 years ago, according to Israel. No one knows what could emerge from the free-for-alls in Syria and the Sinai.

After initially seeming to benefit from the Arab Spring, Turkey soon began sustaining loss after loss. Former Turkish allies Assad and ex-Egyptian President Mohammed Morsi lost control of their respective countries. At least 2.7 million refugees are estimated to have poured into Turkey since the start of the Syrian civil war. And waves of Islamic State members and Kurdish terrorists have launched devastating attacks on Turkish soil.

Perhaps Turkey’s biggest worry is the growing power of Kurdish militias in Syria, which appears to have helped motivate Erdogan on Wednesday to send tanks, warplanes and special forces across the border.

A potential shared concern for Israel and Turkey is Iran’s growing regional clout, particularly in Syria, though Israel is focused on the south and Turkey the north.

Short of military collaboration — a hallmark of the Israel-Turkey relationship prior to the last decade — the two countries’ restored diplomatic relations should at least help them avoid miscalculations, which both sides have learned can quickly turn deadly and contentious in the Middle East.