Clinton: Trump in bed with anti-Semites, other racists 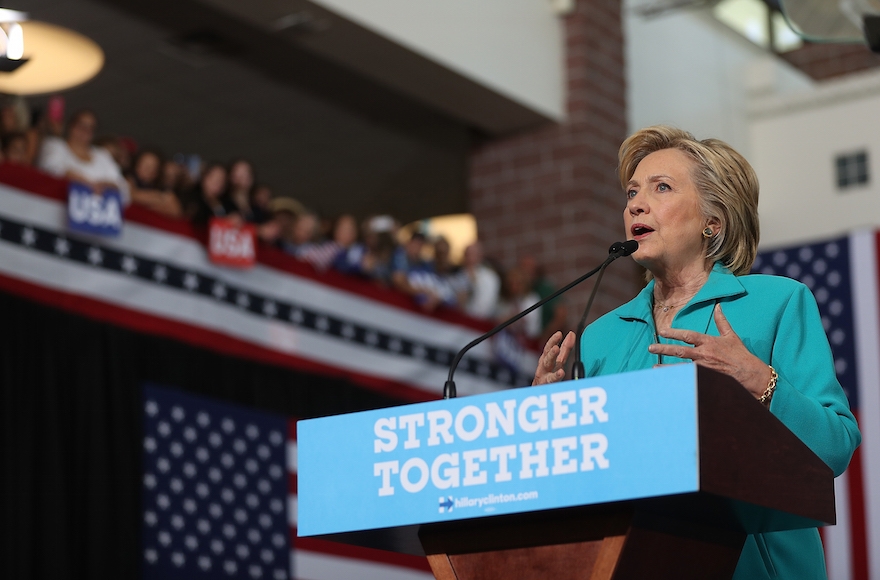 Clinton: Trump in bed with anti-Semites, other racists

The Democratic presidential nominee leveled the accusation against her Republican rival on Thursday during a speech she delivered at Truckee Meadows Community College in Reno, Nevada, the Los Angeles Times reported.

“When Trump was asked about anti-Semitic slurs and death threats coming from his supporters, he refused to condemn them,” Clinton said. “Through it all, he has continued pushing discredited conspiracy theories with racist undertones.”

Trump’s campaign, Clinton charged, “famously posted an anti-Semitic image — a Star of David imposed over a sea of dollar bills — that first appeared on a white supremacist website.”

It was a reference to an ad deleted by Trump in July featuring Clinton’s portrait superimposed on dollar bills and stamped with a red Star of David shape emblazoned with the text “Most corrupt candidate ever!”

The Trump campaign “also selected a prominent white nationalist leader as a delegate in California. They only dropped him under pressure,” Clinton said. It was a reference to the selection in May of William Johnson, head of the American Freedom Party, as a delegate for the Republican presidential primary in the state.

Johnson was dropped after media reports on his selection. The Trump campaign said he had been selected due to a database error.

“When asked in a nationally televised interview whether he would disavow the support of David Duke, a former leader of the Ku Klux Klan, Trump wouldn’t do it,” Clinton said, recalling Trump’s noncommittal comments on Duke during a CNN interview in February. “Only later, again under mounting pressure, did he backtrack.”

And when Trump “was asked about anti-Semitic slurs and death threats coming from his supporters, he refused to condemn them,” she said.

Through Trump, Clinton said, the fringe “alt-right” network, which espouses “race-baiting” and “anti-Muslim and anti-immigrant ideas” has “effectively taken over the Republican Party.”

The recent hiring of Stephen Bannon, the head of the conservative website Breitbart News, as the Trump campaign’s CEO was part and parcel of this process, she said.

“The de facto merger between Breitbart and the Trump campaign represents a landmark achievement for the alt-right,” Clinton said, and is “part of a broader story — the rising tide of hard-line, right-wing nationalism around the world.”

There has always been “a paranoid fringe in our politics, steeped in racial resentment,” Clinton said. “But it’s never had the nominee of a major party stoking it, encouraging it, and giving it a national megaphone. Until now.”

During his address Thursday in Manchester, New Hampshire, Trump called Clinton’s remarks a “disgusting” effort to deflect attention from her own controversies. But he avoided denouncing or otherwise criticizing the elements Clinton associated him with. Trump said that Republicans who have responded in such a way in the past were weak apologists.

Donald Trump can lay ‘Stargate’ to rest — assuming he wants to