When a Jewish Holocaust survivor ‘pissed’ on Hitler’s henchman 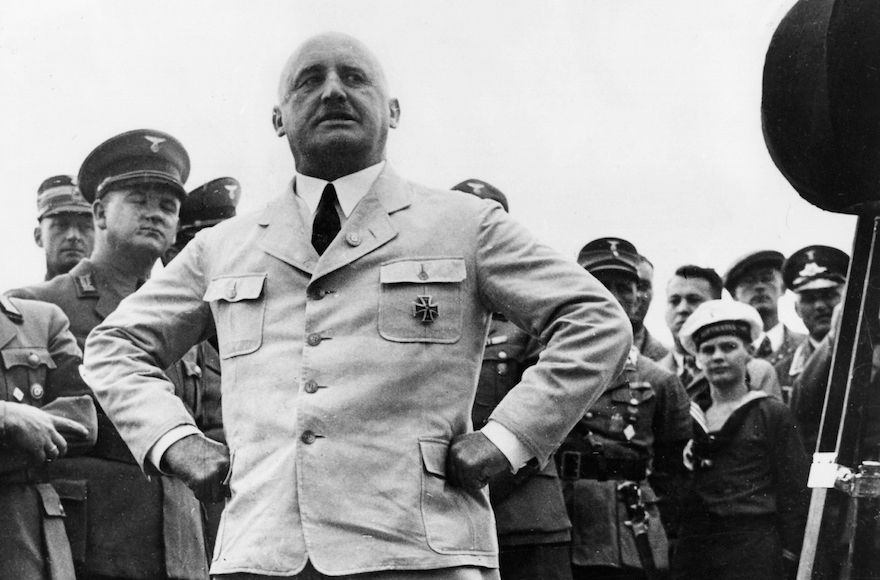 It sounds like a scene from a Quentin Tarantino film.

A Holocaust survivor, whose mother and sister were killed in the genocide, said he locked a Nazi prisoner in a shed for three days, made him strip and urinated on his face, “This American Life,” the weekly public radio show, reported Sunday.

“I told him, from now on, you sleep naked on this cold floor. You will not move,” Werner Meritz said.

“And with that, I pissed all over him. Terrible thing to tell you. His head and everywhere. … I said, you’re just to lie there to get some sense of what you Nazis did to the Jews.”

The captured Nazi was Julius Streicher, a friend and protege of Adolf Hitler and the publisher of the notorious anti-Semitic newspaper Der Sturmer. His tormentor was one of a number of Jewish refugees from Europe who were recruited by the American military to interrogate Nazi prisoners during World War II.

Meritz recalled his actions to rangers from Fort Hunt Park in Virginia, who in 2006 discovered that their national park was once the location for the secret military interrogation project, code-named P.O. Box 1142.

“These men were specifically recruited because they spoke German and because they understood the nuances of German culture and psychology, slang, cultural references, small details that an American would miss,” explained radio producer Karen Duffin.

After spending three months at Buchenwald in 1938, Meritz came to the United States and joined the project for two years. He then travelled to Europe near the end of the war to track down and interrogate Nazis there.

When he captured Streicher, Meritz “flipped out,” in the words of radio producer Karen Duffin. He said he told his fellow soldiers he was going to exact vengeance.

“I was enraged. I was trembling. There were tears in my eyes that I had captured this guy. I had him to myself,” he said.

“I explained to the MPs, I’m gonna do things, you probably think I’m crazy. And you wanna know something? I am crazy. I’m crazed. I captured a Nazi of unbelievable mischief. … I’m gonna do what I have to do.”

After three days of feeding Streicher only potato skins that he had also urinated on, Mertiz handed his prisoner off to American officers. Streicher was later one of 11 Nazis sentenced to death in the Nuremberg Trials. Meritz went on to start his own textile business. He died in 2010. His daughter described him as a sharp dresser with a well-trimmed mustache and strong opinions.

Duffin said the records of Streicher’s capture are “spotty and contradictory,” and someone else is usually credited with capturing him. But an expert at the National Archives told her Werner could have done what he said he did.

Meritz’s account would be an exception to the norm at P.O. Box 1142. The military trained the men to use nonviolent and even friendly interrogation tactics, according to Duffin, who reviewed 70 interviews the rangers conducted with former interrogators and interviewed 10 of the interrogators or their families herself. She also obtained more than 1,000 pages of previously classified files about the program.

“Try to make the prisoner feel that you’re his friend, the first one he’s met since his capture. All are human underneath. Our interrogator’s job is to play upon those weaknesses to help make up the complete intelligence picture,” a World War II interrogation training film featured in the report instructs.

While many of the Jewish former interrogators were happy to help the U.S. defeat the Nazis, some struggled with the policy of getting chummy with the prisoners, who had just help drive them out of their countries and in some cases kill their loved ones.

In the end, the novel approach worked. The interrogators extracted critical information about where the Allies should bomb, German weapons development and the structure of the German army, according to Duffin. One of the enigma machines the Nazis used to send coded messages was captured based on intelligence from P.O. Box 1142, she said.

Having signed a secrecy agreement with the army, most of the former interrogators did not speak about their work for more than 60 years, even to their wives and children. Then, in 2006, army intelligence cleared them to talk to the park rangers.

At the end of the war, P.O. Box 1142’s mission changed from interrogating Nazis to wining and dining them in an attempt to recruit them to the American side, especially scientists who could also be valuable to the Russians.

Arno Mayer, 88, who escaped the Nazi occupation of Luxembourg and went on to become a history professor at Princeton University, was assigned Wernher von Braun, the famed Nazi rocket scientists who later helped the U.S. get to the moon. Mayer told Duffin he regretted not being more subversive.

“I should have told them to go to hell, but I didn’t do it. I was a coward. I mean I only exploded once. I could have exploded many other times,” he said.

The men who participated in P.O. Box 1142 went on to become lawyers, a CIA agent, an ambassador, head of the Culinary Institute of America, conductor of the Chicago Chamber Orchestra and the richest man in America in the 1980s, John Kluge.