Why do Florida’s Orthodox Jews support Trump? Because they fear Clinton 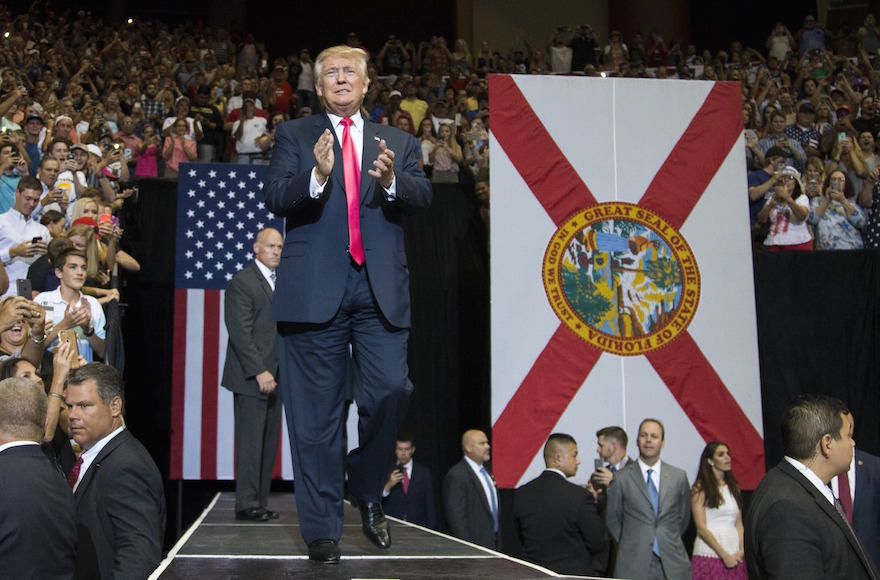 NEW YORK (JTA) — Rebecca Raab was shopping recently in a South Florida Costco, wearing the trademark Orthodox outfit of a long skirt and baseball cap, when an employee waved to her and said “Shalom! We’re voting for Trump because we can’t have Hillary in the White House. She’s not good for us!”

Raab isn’t sure whether the employee was Jewish, let alone observant. But he may as well have been speaking for the vast majority of the Sunshine State’s Orthodox Jews.

A recent poll shows that the Orthodox in Florida will be voting for Donald Trump over Hillary Clinton by a 3-to-1 margin, 66 to 22 percent. According to the poll, which was commissioned by the pro-Democratic Schlep Labs PAC, the state’s Jews as a whole swing the other direction, preferring Clinton, the Democrat, over the Republican Trump by nearly the same margin, 66 to 23 percent. Six percent of Florida’s Jews are Orthodox, according to the poll.

But if Orthodox voters are pulling for Trump, it isn’t necessarily because they like him. It’s because they disdain Clinton and see Trump as the lesser of two evils.

Interviews with a handful of Orthodox Florida voters painted a picture of a community dissatisfied with its presidential choices this November. They feel forced to choose between a candidate who some see as a blowhard (Trump) and one who some perceive as a genuine threat to the country (Clinton). Most apparently will choose the blowhard.

“Everything there is to know about Hillary Clinton is out there on the table,” said David Goldwasser, 29, of Miami Beach. “She’s a criminal. She does not deserve to hold office. Trump just has a loud mouth. Hillary will destroy the country.”

Orthodox Trump backers mentioned Israel policy as one of their concerns, but often it wasn’t their top issue. Instead they were concerned about Clinton using a private email server as secretary of state, or about accusations of political influence stemming from donations to the Clinton Foundation, which she heads with her husband, former President Bill Clinton, and daughter, Chelsea. They see Clinton as an unprincipled and discredited career politician.

“She’s changed her opinion on many issues,” said Miryam Schloss, 30, of North Miami Beach. “I don’t believe for a second she’s going to follow through. She rubs me the wrong way. I don’t feel like she represents me.”

But if one word could describe Orthodox voters in Florida, it would be “unenthusiastic.” Every Trump supporter also criticized him, questioning his temperament and language. Some said his immense wealth keeps him removed from the experience of the average American.

Given that the alternative is Clinton, however, they seemed willing to forgive the billionaire real estate magnate’s flaws.

Although Trump has been widely criticized for comments on immigrants, veterans, Muslims and women — even by members of his own party — Raab said she could not remember any Trump statement that offended her. She said that no matter what he says between now and November, Trump will get her vote.

“I can’t think of anything offhand because I only have two choices right now to vote for president,” said Raab, 58, of Deerfield Beach. “I have to weigh a not-great choice and a terrible choice. I’ll go for the not-great choice.”

Rabbi Efrem Goldberg of the Boca Raton Synagogue, a large modern Orthodox synagogue in South Florida, said Orthodox support of Trump may stem more from party loyalty than from affinity toward the candidate. As many polls of Jewish voters have confirmed, Goldberg said Orthodox Jews feel Republicans are friendlier to Israel than Democrats and vote on that basis — a trend he’s observed since taking his pulpit 17 years ago.

Given two unappealing candidates, the rabbi said many will fall back on party loyalty.

“I think Orthodox Jews have increasingly leaned politically toward the Republican Party,” he said. “As disturbed as many are to vote for Trump, I think that many will go with the party, despite the particular candidate.”

Some Florida Orthodox Jews are channeling their dissatisfaction in other ways.

“Over the past few months in particular, Hillary and Trump have day by day dug themselves into deeper holes,” Bendel said. “Each one manages to do something worse every day. Any third party is a better option than those two megalomaniacs.”

Deanna Casper, a Clinton backer, offered arguments that mirrored those of Trump supporters. She doesn’t adore the former secretary of state and U.S. senator, but much prefers what she portrayed as Clinton’s flawed record over Trump’s personality.

“For me it’s the lesser of two evils,” Casper said. “I would not vote for someone whose character trait or ego is so flawed, someone who’s such a disgusting human being, as well as someone who has basically no experience in foreign policy. I can’t even believe he won the nomination. It’s a joke to me.”

But those voting Trump downplayed his controversial statements, attributing them to the intensity of the campaign or a tendency to speak off the cuff. Once he’s in office, Schloss said, there will be safeguards and advisers to prevent him from doing anything too extreme.

“I do think his anger gets a hold of him,” she said. “There are so many checks and balances. The president can’t just walk over to a button and blow things up.”