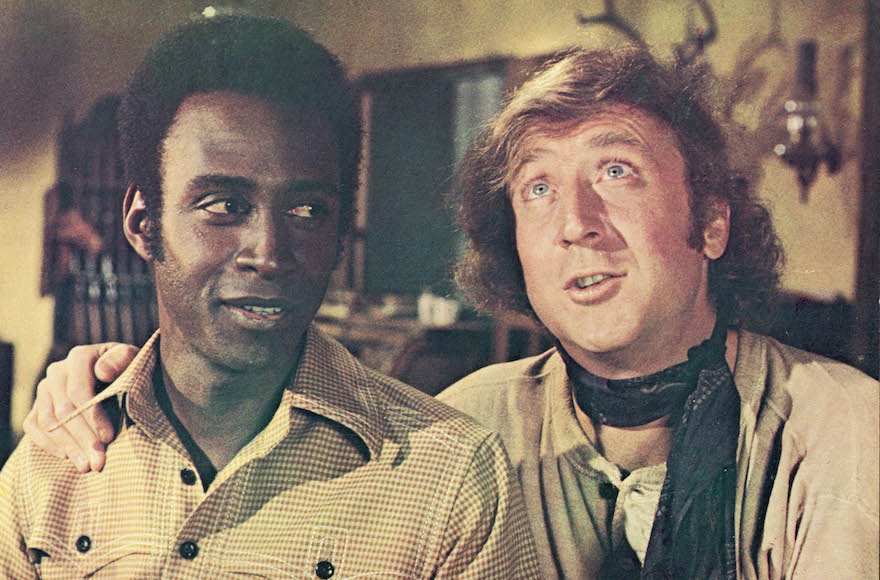 Gene Wilder, right, in a scene with Cleavon Little from "Blazing Saddles," released in 1974. (Warner Bros./Courtesy of Getty Images)
Advertisement

(JTA) — Last year I joined some 3,000 people at the New Jersey Performing Arts Center in Newark for a wide-screen showing of Mel Brooks’ 1974 Western parody “Blazing Saddles.” In the onstage interview that followed, Brooks, then 89, was beside himself in his delight at sharing his 42-year-old comedy with a real live audience.

There was only one awkward moment in a joyous and hilarious evening, and it came when Brooks asked if anyone in the audience actually lived in Newark. One person, in the balcony, said yes. Brooks couldn’t know it, but it was a reminder of the sad history of Newark and the white ethnic populations, including a vibrant Jewish community, that fled the city for the suburbs — an exodus that culminated with the riots that scarred its downtown in 1967. The Performing Arts Center is an attempt to woo back suburbanites, although few linger after the concerts and performances end.

Brooks’ inadvertent reminder of the yawning divide between mostly black Newark and its mostly white suburbs was particularly poignant considering the themes of racial bigotry and reconciliation that he doesn’t just sneak into “Blazing Saddles,” but are in fact its comic engine.

Co-written in part with the black comic genius Richard Pryor, “Blazing Saddles” is about a a lily-white town in the desolate West that is in the way of a railroad being built by the villainous Hedley Lamarr, played by Harvey Korman. To rile the people of Rock Ridge and make it easier for his henchmen to drive them away, Korman appoints a black railroad worker, played by a dashing Cleavon Little, as their new sheriff, inevitably named Black Bart. The townspeople are appalled, and much of the plot, such as it is, involves Little trying to win over the bigots and unite the town against Korman’s robber baron.

That’s where Gene Wilder comes in. The orange-haired, blue-eyed master of the comedic pause and the slow burn, who died Sunday at 83, plays Jim, aka the Waco Kid, a washed-up gunslinger whom Little finds sleeping it off in the town jail. The chemistry between the characters — and the actors — is apparent from their first encounter.

“Are we awake?” Bart asks the drunk cowboy hanging upside down from his bunk.

The “we” there is telling, as is Wilder’s stating the obvious from the get-go. His character isn’t racist — he understands in an instant that black men do not become sheriffs in the mythical American West. From this brief encounter grows one of the cinema’s greatest onscreen friendships, as well as a brief reminder of an off-screen black-Jewish alliance that was already fading, if not dead, by the time the movie came out.

Jews and blacks had made common cause in the early years of the civil rights movement — out of mutual self-interest, it’s true, but also a sense of idealism represented by the Rev. Martin Luther King Jr.’s frequent invocations of the Old Testament and the Jewish kids who traveled south to agitate for black voters’ rights. Jews were over-represented in the NAACP, especially  among its legal teams, and the big Jewish organizations often adopted the civil rights cause as their own.

By the late ’60s, however, identity politics, the rejection by black militants of “colonialist” Zionism, and riots that hollowed out Newark and dozens of other cities drove a wedge between blacks and Jews.

And yet something in the friendship of Black Bart and the Waco Kid echoes what once was. Wilder’s character is never identified as a Jew, but the former Jerome Silberman, with a frizzy Jewfro that he can barely contain under his ten-gallon hat, is the furthest thing possible from the central casting idea of the movie gunfighter. (One can only imagine what the film would have been had Brooks’ first choice for the role, the typically handsome actor Gig Young, not shown up too drunk to perform. “If you want an alcoholic, don’t cast an alcoholic,” Brooks once said.)

Like the slickly urban Little in his tailored buckskin outfits, Wilder lands in the movie like a visitor from the multi-ethnic, post-civil rights era future, as if the two met at a jazz club in the West Village, not a one-horse town in the Badlands.

Wilder also plays a role that recalls a common black-Jewish dynamic of the civil rights movement — the Jewish consigliere. The Waco Kid is Black Bart’s only ally against the racist townspeople, and while Bart faces most of the real physical dangers, Jim provides some muscle and moral support.

When Bart is upset that he’s been rejected by the citizens of Rock Ridge, Wilder consoles him with a gentle monologue: “What did you expect? ‘Welcome, sonny’? ‘Make yourself at home’? ‘Marry my daughter’? You’ve got to remember that these are just simple farmers. These are people of the land. The common clay of the new West. You know… morons.”

(Why does that speech sound particularly apropos in 2016?)

Later, the two will rally Rock Ridge against a mercenary army of bad guys that includes — in addition to your standard Western lineup of “hustlers, cutthroats, murderers, bounty hunters [and] desperadoes” — robed members of the Ku Klux Klan, helmeted Nazis and camel-riding Arabs. Talk about your common cause.

The amity between his black and white protagonists grew out of the writing room itself, Brooks recalled after the Newark screening, explaining that “Pryor wrote the Jewish jokes, the Jews wrote the black jokes.”

In an essay for NPR, Nadya Faulx once noted that the interracial relationship between Bart and Jim wasn’t unprecedented in film, but “it was one of the first in which race wasn’t treated as an obstacle.” “Blazing Saddles” came after “The Defiant Ones,” in which Tony Curtis and Sidney Poitier are literally shackled together as a white and black (and Jewish and black) odd couple. “Blazing Saddles” also anticipated a string of black-white buddy movies to come, include Wilder’s own collaborations with Pryor on “Stir Crazy” and other comedies, as well as “Beverly Hills Cop,” “Lethal Weapon” and “48 Hours.”

The black-Jewish alliance was never as solid as some survivors of the ’60s like to claim. Philip Roth, the bard of lost Jewish Newark, once recalled that when he was growing up in the city in the ’30s and ’40s, “we were all — Irish, Italians, Slavs, blacks, Jews — settled and secure in different neighborhoods. There was barely any social overlap.”

“Blazing Saddles” is, perhaps, a movie about what could have been and what might still be: a better world in which Jews and African-Americans win out over racism, xenophobia, ignorance and a rapacious tycoon through the power of friendship, cunning, some bloodless gun play — and an epic fart joke.

2 years after she was picked to lead JTS, Shuly Rubin Schwartz inaugurated as first woman chancellor