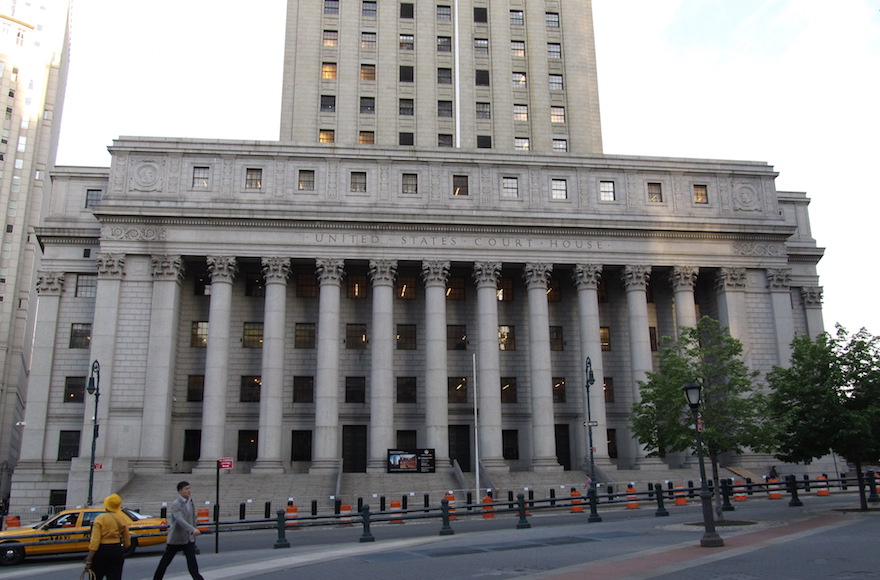 Thurgood Marshall Courthouse, home of the U.S. Court of Appeals for the Second Circuit, in Manhattan, May 17, 2012 (Ken Lund/ Flickr, CC BY-SA 2.0)
Advertisement

(JTA) — A U.S. court canceled a $655.5 million verdict against the Palestine Liberation Organization and the Palestinian Authority in a case brought by American families of victims of terrorist attacks that occurred in Israel in the early 2000s.

While acknowledging the “unquestionably horrific” nature of the attacks, which killed 33, including several Americans, and wounded over 450, the appeals court voted 3-0 to cancel a lower court’s 2015 verdict, ordering the lawsuit to be dismissed.

The court said it did not have jurisdiction in the case, since the attacks occurred outside the country and did not specifically target Americans, Reuters reported Wednesday.

The offices held by Palestinian Authority and PLO in the U.S. were not enough to give it jurisdiction in the case, wrote Judge John Koeltl of the U.S. 2nd U.S. Circuit Court of Appeals in Manhattan, according to Reuters.

The plaintiffs, families of victims injured in six terror attacks that occurred in Israel in 2002-2004, argued that the late PLO Chairman Yassir Arafat had paid attackers and their families.

They were suing under the Anti-Terrorism Act, which allows American victims of international terror attacks to sue for damages in the U.S.

“The very terrorists who prompted the law have now hidden behind the U.S. Constitution to avoid responsibility for their crimes,” said Kent Yalowitz, a lawyer for the families, according to Reuters. “This cruel decision must be corrected so that these families may receive justice.”

“This is a Palestinian victory that should not be underestimated and it is a big blow to anyone who attempts to blackmail us. We have drawn a red line under it,” he said.