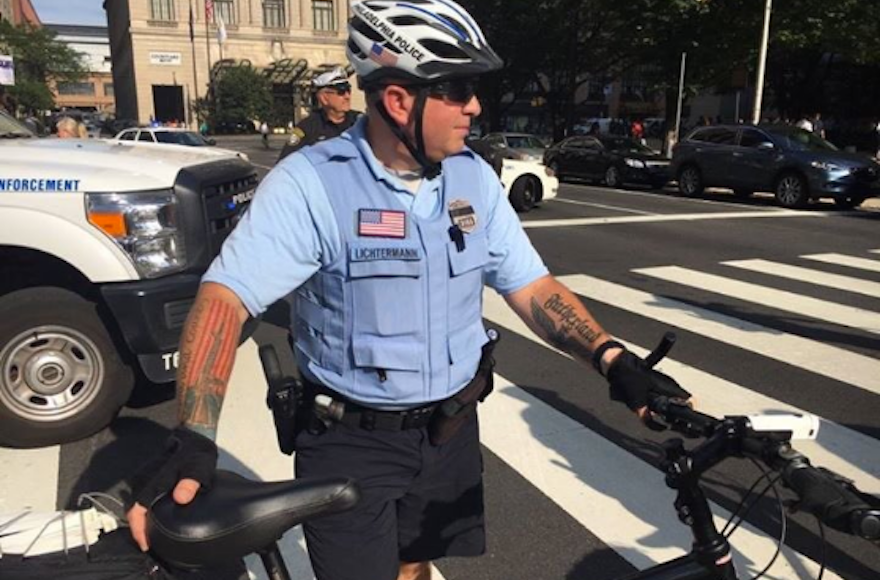 (JTA) — The Philadelphia Police Department launched an internal investigation of one of its officers after a photo circulated online of the officer sporting a tattoo resembling a symbol used by the Nazis.

The image of Officer Ian Hans Lichtermann was posted to Facebook by Evan Parish Matthews, who said he took the photograph at a Black Lives Matter rally in Philadelphia during the Democratic National Convention on July 26. Lichtermann appears to have a tattoo of a parteiadler, or the Nazi eagle symbol, underneath the word “Fatherland” — a term the Nazi Party used to describe Germany.

“I find it offensive, and I know many others do as well,” Philadelphia Mayor Jim Kenney said in a statement Thursday, when the investigation was announced. “This image is particularly offensive to our WWII veterans who fought valiantly to free Europe from Nazi Germany, as well as all victims of Nazi atrocities.”

The Philadelphia Police Department said it does not have a policy on officers’ tattoos but it is discussing whether to create one.

As of Friday, Instagram and Flickr accounts purportedly run by Lichtermann had been deleted, Philadelphia Magazine reported.

The images created a stir on social media.

Yeah. That’s what I want. To be stopped by a cop with a Nazi swastika. https://t.co/YxDude9Ijm

The question is. What kind of socks does this cop wear to match his Nazi tattoo pic.twitter.com/NlUYJzAx2c

Okay is it just me, or should having a Nazi tattoo mean you don’t get to be a cop??