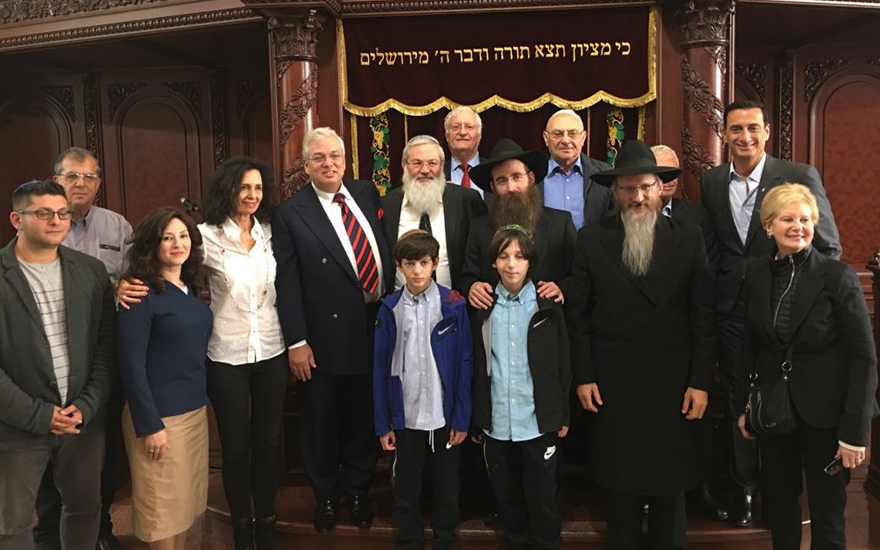 KAZAN, Russia (JTA) — Russia’s chief rabbi and several Israel Defense Forces generals commemorated a late war hero in a city he passed through while fleeing Europe during the Holocaust.

Avigdor Ben-Gal, better known as Yanush, died in February in Israel, a country he reached in 1943 at the age of 6 together with hundreds of other orphaned refugees from their native Poland, who are known as the Tehran Children. He was revered in Israel for his role in blocking far superior Syrian forces from advancing into the Jewish state in 1973.

“Yanush saved the State of Israel,” Eli Ben-Dahan, Israel deputy defense minister, said Sunday during a commemoration service for Ben-Gal at the synagogue of Kazan, a city located in southwest Russia.

The ceremony, attended by Ben-Gal’s widow, Avital, and two of his seven children, 12-year-old twins Tohar and Ilai, was organized by Limmud FSU, an organization that sets up Jewish learning conferences for Russian-speaking Jews, including in Kazan.

Ben-Dahan described Ben-Gal, his former commander when Ben-Gal was head of the IDF Northern Command, as uncompromising in his attitude to terrorism.

Berel Lazar, the chief rabbi, highlighted in his eulogy of Ben-Gal his humanity, which Lazar traced back to Ben-Gal’s difficult childhood. “He helped others around him in need because he never forgot his hour of need,” Lazar said. “He recognized hunger in others because he had experienced it.”

Ben-Gal was among the youngest of the Tehran Children, who trekked a tormented 8,000 miles to Israel through Kazan, Siberia, Uzbekistan, Tehran, India, Egypt and finally pre-state Israel. He and his sister were orphaned during the journey and subjected to hunger, cold and abuse. He also developed an acute eye infection that his older sister helped cure by wiping his eyes frequently with a wet cloth.

“We had this commemoration here because it was an important stop on Yanush’s path to life,” said Limmud FSU founder Chaim Chesler at the event. “But the fact that he is being honored in such a big way even here shows the magnitude of his impact on the Jewish people.”

Also present at the commemoration, which was attended by several dozen people, was Haim Erez, a  former commander of the IDF Southern Command who was also a member of the Tehran Children and a friend of Ben-Gal. Erez also spoke at the Limmud conference in Kazan, which had 600 participants and was themed around the story of the Tehran Children.

He became a refugee at the age of 4 after his mother left him at the Polish-Russian border and instructed him to cross over to Russia and try to find his father. Erez did not find his father but was eventually reunited with his mother in Israel.

About 1,000 Jewish orphans were kept at monasteries in Uzbekistan during the war. Only 800 were retrieved and brought to Israel as Tehran Children.