Donald Trump says Israel will be destroyed unless he is elected 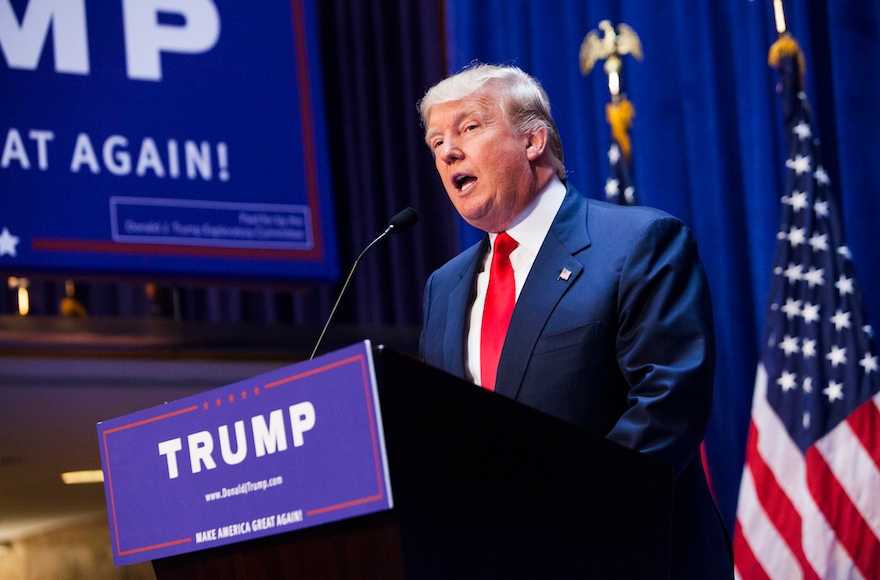 Donald Trump giving a speech as he announces his candidacy for the U.S. presidency at Trump Tower in New York City, June 16, 2015. (Christopher Gregory/Getty Images)
Advertisement

WASHINGTON (JTA) — Donald Trump said if he is not elected president, the Iran nuclear deal will destroy Israel.

Last year’s deal, which trades sanctions relief for a nuclear rollback, “is going to destroy Israel — unless I get elected,” Trump told Cleveland-area labor leaders on Monday, according to The Columbus Dispatch. “Then Israel will be just fine.”

In Virginia, meanwhile, Hillary Clinton’s running mate, Sen. Tim Kaine, D-Va., defended the Iran deal and dismissed Trump’s concerns about Israel as insincere, saying the Republican’s strategy for Israel was to “pat them on the back and tell them good luck.”

Clinton, as secretary of state in President Barack Obama’s first term, helped shape the negotiations for the Iran deal and said she will uphold the agreement, although the Democratic nominee has suggested she will be more stringent in enforcing it than the Obama administration.

Unlike many of his rivals during the Republican primaries, Trump has not said he would scrap the agreement, although he has called it a bad deal. Trump has said he would first consult with his national security advisers.

On Tuesday, addressing a town hall in Virginia Beach, Virginia, a town with a substantial military population, Trump again attacked the deal, but he did not directly answer a question posed by one of his national security advisers, retired Lt. Gen. Michael Flynn, about what he would do about it.

Trump said the deal had rendered Iran a “world power,” whereas it had previously been a regional power.

“The deal is one of the worst negotiated deals I have ever seen,” he said.

“They’re highly threatening to the state of Israel, they’re so bad for Israel,” Trump said of Iran, blaming Clinton and Obama for empowering the Islamic Republic.

“Thanks in part to the global sanctions coalition that Hillary Clinton assembled, and negotiations that she initiated, President Obama ultimately achieved a historic agreement that put a lid on Iran’s nuclear program without firing a single shot,” Kaine said. “But we have no idea how Donald Trump would handle Iran – and frankly, neither does he.”

Kaine noted that Trump last year said he would be neutral when it came to negotiating Israeli-Palestinian peace – Trump has since said he would favor Israel – and contemplated making Israel pay for its U.S. defense assistance.