The alt-right meets the media — and debates the Jewish question 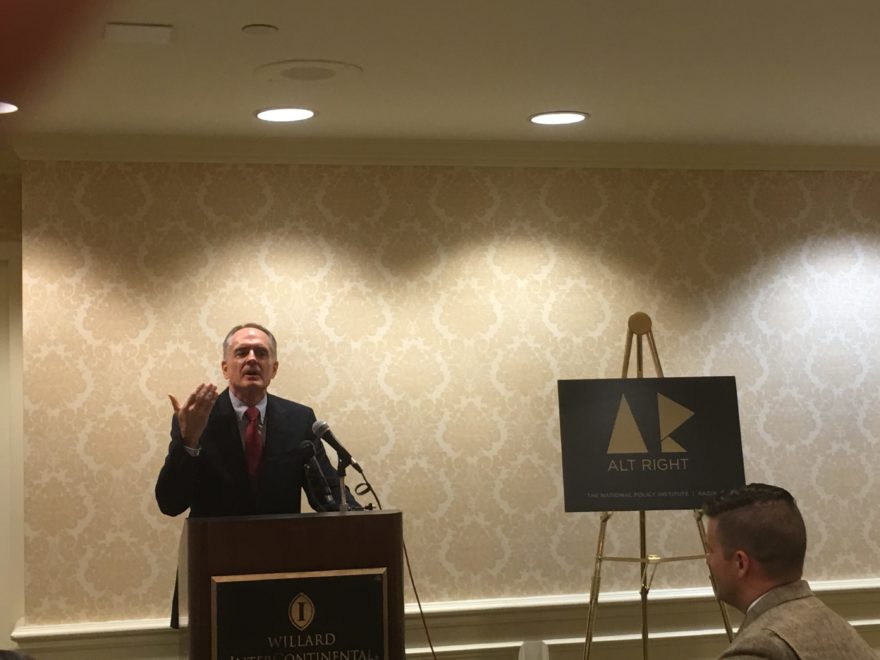 Jared Taylor, the editor of American Renaissance, addresses a news conference on the alt right in Washington DC on September 9 2016, while Richard Spencer looks on.
Advertisement

And of course it was about the Jews.

The email said the alt-right guy would meet you in front of Old Ebbitt Grill, the hoary Washington eatery beloved by tourists and hard by the White House. He would “be wearing a charcoal suit and brown tie,” the email said, but these details turned out not to be necessary. The crewcut, the sunglasses, the tight, thin frown, the pacing: This was the alt-right guy.

“It’s at the Willard Hotel,” he said and directed me around the corner to the historic hostelry where Abraham Lincoln, destroyer of the Confederacy, spent the night, and where Julia Ward Howe wrote the “Battle Hymn of the Republic,” the anthem that inspired destroyers of the Confederacy.

Three luminaries of the movement had hoped to convene on Friday at the nearby National Press Club for a news conference at last explaining to the benighted media the movement that has embraced Republican nominee Donald Trump — a movement that Democratic nominee Hillary Clinton hopes to attach like a carbuncle to her rival, along with its viciousness and its racial preening. (Trump has adopted some of the movement’s symbols, and at first was reluctant to renounce them; in recent weeks he has renounced groups associated with the movement.)

According to the conveners, threats against the National Press Club led the institution’s leadership to shut them out, hence the need for secrecy. And so we ended up in the Willard Hotel — in the Peacock Room, appropriately — for two solid hours of triumphant strutting.

“I don’t think the National Press Club is ever going to censor the Flat Earth Society or some bizarre space-age ‘Star Trek’ convention,” Richard Spencer, who also wore a crewcut and favored dramatic stage whispers, said at the outset. “They’re censoring us and there is a reason for that, and that is because we are right.”

“They” were censoring the alt-right because of its role in propelling Trump, whom Spencer said was not so much admired for his positions – although his foreign and immigration policy were appealing – but for his style.

“It’s about style over substance, the fact that he doesn’t back down, the fact that he’s willing to confront his enemies on the left, there’s something about that,” he said. “This is what a leader looks like, this is someone who can make the future.”

There were maybe 50 people in the room, and a good portion of them were not media but professional, eager fans knowingly chuckling at inside jokes and nodding at the opaque terminology. (The comparison with Trekkies was not inapt.) There was also the woman with the long gray hair, wrapped in a tallit, weaving about the back recess of the room – was she a confused alt-righter? A protester? A bat mitzvah guest escaped from the ballroom down the hall?

“I’ve seen billowing flags with eagles with a tear,” said Spencer, explaining the logo he unveiled for the occasion, a convening of three triangles approximating an “A” and an “R.” “If I had billowing flags and crying eagles, I would not be a member of the alt-right.”

That didn’t exactly explain the triangles, and no reporter had suggested flags and eagles as an alternative, but the true believers understood, or at least believed they understood, and erupted into giggles, much to Spencer’s grinning satisfaction.

“We talk about the things people are afraid to talk about, and that is because they are true,” said Spencer, who is president of something called The National Policy Institute – although he also said that for now he abjures “policy” – and who, beaming, claimed to be progenitor of the term “alt-right.”

Spencer and the two other movement leaders who convened the conference — Jared Taylor, the editor of the American Renaissance, which spotlights race and immigration, and Peter Brimelow, the editor of VDARE, which focuses on immigration and race — agreed on their joy in Trump’s triumphant rise. And plenty of other stuff, too: the celebration of whiteness, the weird insistence that while whites outsmarted blacks and Hispanics, Asians outsmarted us all, so how could we, the media, call these three musketeers white supremacists? Call them Asian supremacists!

There were outbursts like “Gas the kikes!” by Taylor, quickly followed by an explanation that this is the kind of expectoration unacceptable even on the alt-right, or at least the alt-right as imagined by Taylor.

There were the inside jokes that transitioned from weird to disturbing: Brimelow was describing the pending dystopia he believed inevitable and saying he was glad his wife allowed him to teach his children to shoot.

“At my advanced age, I have three little girls,” he said in an accent still redolent with England’s north, and he paused and eyed Spencer before adding with emphasis, “one of them a brunette.” They both laughed.

There was the insistent, unapologetic embrace of the retrograde. A journalist asked if there were women among the alt-right leadership. There were a few, Taylor said, but male leadership was likelier because it was. Spencer said there were plenty of women “fans” – not activists or contributors, mind you, but “fans,” in all its intimations of ebullience and unalloyed groupie-love.

There were mild disagreements. Taylor wanted the instruments of government removed as a means of encouraging like races to gravitate toward one another and self-sovereignty, believing that outcome was a natural evolution. Spencer wanted to formally establish a white ethno-state.

These were quibbles, fodder for a friendly argument later in the Willard bar, where the trio said they could be found after the formal part of the day was through.

And then there was the Jewish question.

“I tend to believe that European Jews are part of our movement,” Taylor said. “I think it is unquestionable there has been an overrepresentation by Jews [among] individuals that have tried to undermine white legitimacy.”

But, he said, the same is true of Episcopalians.

“Does that mean all Jews are enemies of the white race? I reject that,” Taylor said.

Spencer insisted there was no room for Jews in his white ethno-state – he was happy to work with the Jewish ethno-state, he said, a tiresome reduction of what Israel signifies, but Jews would not assimilate.

“I think most on the alt-right recognize that Jews have their identity and they’re not European,” he said. “Jews have a very different history.”

Brimelow tried to mediate between Spencer and Taylor, saying that Jews seemed all right, but that Jewish organizations were on “the wrong side.” Soon, however, he was digressing back to his imagined dystopia.

“Jews are disproportionately represented in every kind of craziness,” he continued, apparently referring to the Jewish groups, and “if my pessimism about the future of the country is correct, they will pay for it,” presumably at the hands of his three armed little girls, including the brunette.

Spencer was unswayed, continuing, “Europeans are Europeans and Jews are Jews. To call Jews European is to insult them.”

Taylor, his modulated tones slightly unmodulating, rejoined: “I don’t think that a Jewish person who identifies with the West or with Europe is something we should deny,” he said. Not many Jews would think of themselves that way, he said, “but I don’t think it’s an insult to them” to give them the option.

The talk quickly returned to an area of assent, white identity, and feathers were unruffled.

“I want my grandchildren to look like my grandparents,” Taylor said, “not like Fu Manchu or Whoopi Goldberg or Anwar Sadat.”

There were nods of agreement and more pledges to continue the conversation in the Willard bar.

As the room emptied, I prayed silently that Taylor would enjoy good health long enough to behold a grandchild with a pointed goatee, thick braids, foot-long fingernails and a prayer bump, and I recalled his opening remarks, and his overarching predicate for the existence of racial differences.

Asians consistently averaged highest on IQ scores, Taylor said, then came whites, Hispanics and blacks. Lest anyone blame this on cultural or social bias in the tests, he said, the same descending order was attached to the ability to recite numbers in reverse order from memory: Asians are most adept, then whites, then Hispanics, then blacks.

I have no idea if this was true — if anything he said was true — but this “factoid” stuck out for me: My younger son once scored off the charts in the reverse order memory test. The assessor was amazed: She would increase each string of random numbers, and he would accurately rattle them off in reverse order – and never faltered. No one had scored like this, she told me.

I will confess to briefly entertaining a future for him at blackjack tables, but soon repressed any nascent pride. This was a parlor trick. (Oh, and he’s not Asian.)

Contemplating those cursed blocks of blank space on the second page of summer camp applications headed “what are your child’s best qualities,” I tend to scribble in words like “kindness,” “humor,” “resilience,” “musicality.” I’m sure other parents have characterological lists they swear by.

Few, I think, would include “Reciting from memory numbers in reverse order.” Since the test, I hadn’t even remembered it until Friday. As a quality, it seems as crimped and reductive as, well, skin pigment, eye color and hair tint.

Like Brimelow, I came away imagining a dystopia, but mine included children segregated according to their ability to ace memory tests. I saw Taylor drilling a grandson, dressed in 1920s finery, on reverse recitation of lists of randomly generated numbers.

I shook off my reverie and looked around for the woman in the tallit. She had disappeared.