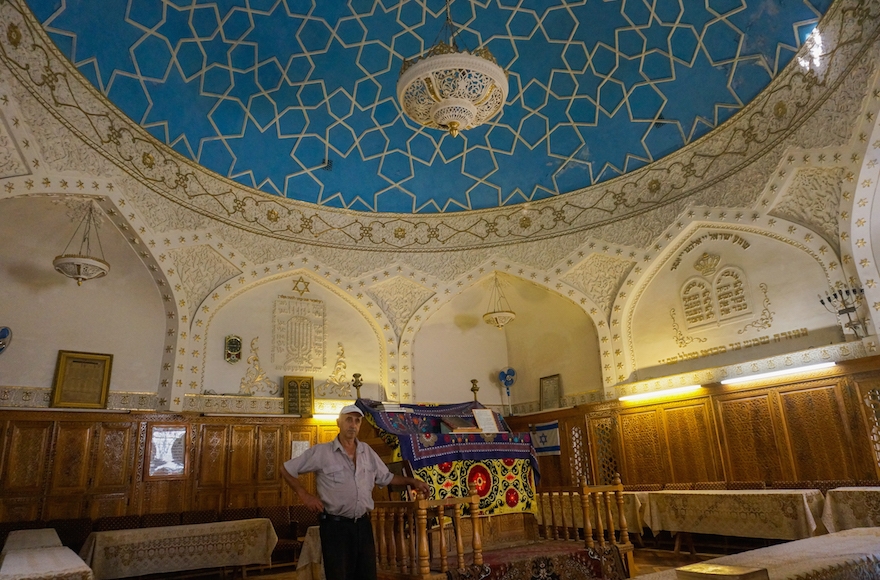 Yossif Tilayev, the caretaker of the Bukharian synagogue of Samarkand, Uzbekistan, explaining about the community, Sept. 11, 2016. (Cnaan Liphshiz)
Advertisement 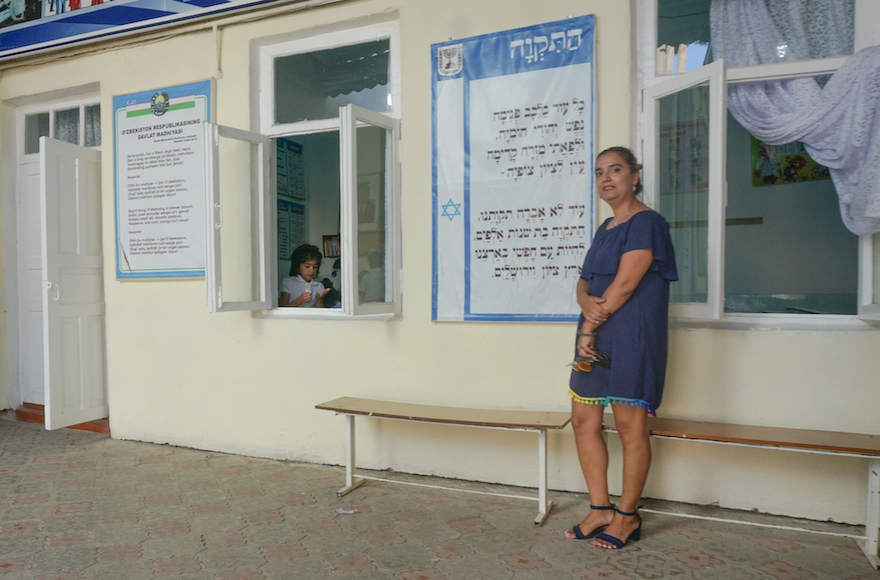 BUKHARA, Uzbekistan (JTA) – Driving through this dusty desert city of many ornate and ancient mosques, Shirin Yakubov recalls the ruthlessness of her country’s recently deceased president of 25 years.

“He killed all of them, every last one,” she says of Islam Karimov’s role in the 2005 police massacre of hundreds of suspected Islamists in the eastern city of Andijan following unrest.

A no-nonsense businesswoman and a doting Jewish mother of three, Yakubov belongs to the urban elite of this Central Asian country of 32 million citizens that shares a border with Afghanistan.

Like many from her social class, she credits the absence of radical Islam from public life to Karimov’s oppressive rule. Under Karimov, who died Sept. 2 from a stroke at 78, the all-powerful SNB security service was responsible for the torture and “disappearance” of countless dissidents in a country with no free press and a no-entry policy for foreign journalists.

With the passing of Karimov, an isolationist who strived to stay on good terms with but independent of Russia and the United States, Yakubov and other relatively affluent Uzbekistanis — including the country’s 13,000 remaining Jews — look to an uncertain future.

Prime Minister Shavkat Mirziyoyev was appointed Sept. 8 to succeed Karimov as an interim president, auguring changes that hold risks but also the promise of greater political, individual and commercial freedom and trade opportunities.

Foreign diplomats here blame Karimov not only for systemic violations of human rights, but also for holding back mineral-rich Uzbekistan from realizing its full economic potential. Under Karimov, the country’s restrictive policies included an obstructive visa regime for outsiders and an official exchange rate that is half the actual black-market value of its local currency, the sum, against the dollar. 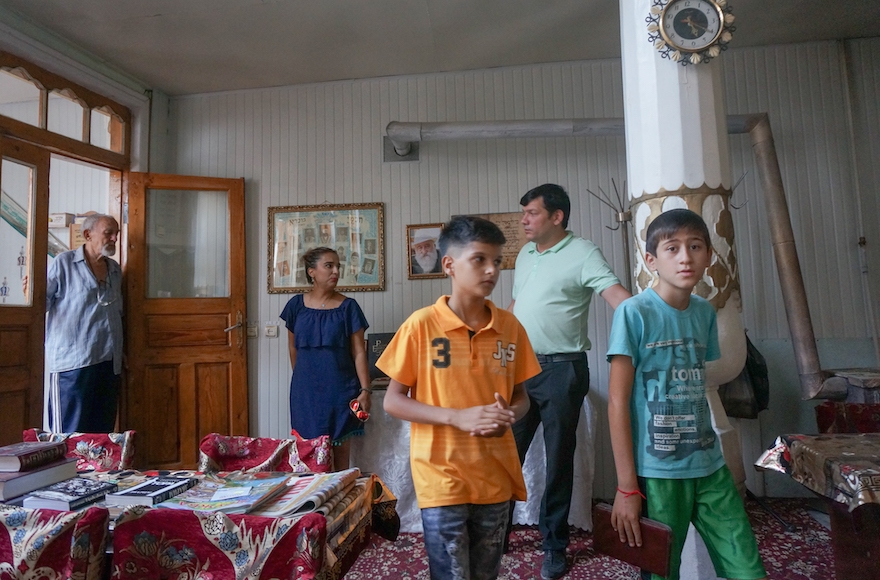 Shirin Yakubov visiting the main synagogue of Bukhara, Uzbekistan, with her son, in orange shirt, his friend and the site’s two Muslim caretakers, Sept. 9, 2016. (Cnaan Liphshiz)

But many Uzbekistanis and all Jewish community leaders, it appears, say they are grateful to the late leader for the stability achieved under his rule and the growth that did occur. The provincial city of Tashkent grew into a clean and safe metropolis of 3 million residents with an efficient subway system, shining conference halls and stadiums, hygienic marketplaces and peaceful parks where magpies and Indian starlings bathe in fountains amid hedges of purple basil plants.

As for Yakubov, she credits Karimov’s policies for her ability as a woman to drive a car despite the resistance it raises in a deeply traditional society where many women are not expected to go out of the house much, let alone sit behind the wheel of an automobile.

In 2005, amid the unrest that exploded in Andijan, someone threw a large brick into her car twice, smashing the windshield, she says. The intimidation stopped immediately after police questioned some neighbors – a standard procedure in some countries, but which in Uzbekistan is perceived as a last warning before the dispensation of swift and perhaps extrajudicial steps.

“No one is going to call me a ‘dirty Jew’ here,” says Arsen Yakubov, Shirin’s husband, as he walks to one of Bukhara’s two synagogues for services on Friday evening. Even before going inside, he donned the traditional, square and ornamented Bukharian hat that serves many Jews here as a kippah.

At a time when synagogues in Western Europe and even Russia are patrolled by armed police or military, Jewish institutions in this predominantly Sunni nation are unguarded. It goes a long way toward explaining why special prayers for Karimov’s soul were recited in Uzbekistan’s five synagogues following his passing. 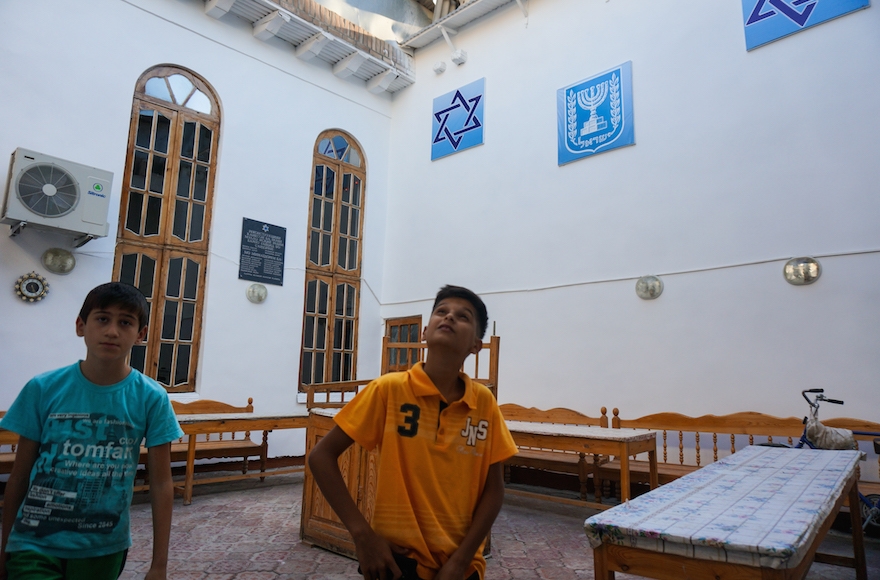 Benjamin Yakubov, right, with his friend Natan, studying the ceiling of the main synagogue in Bukhara, Uzbekistan, Sept. 9, 2016. (Cnaan Liphshiz)

Beyond the threat of retribution by an authoritarian government against anyone who punishes them, the Jews here are also safe because they are widely accepted as a native ethnicity, just like ethnic Tajiks and Russians. They have, after all, maintained a documented presence here for 1,000 years, which some historians believe actually goes as far back as 1000 B.C.

In Bukhara, where anywhere between 40 to 150 Jews live – depending on the definition one applies – some are greeted with “shalom” by their Muslim neighbors as they gather for evening and morning prayers (achieving a minyan, the quorum of 10 Jewish men necessary for some prayers in Orthodox Jewish communities, is often an issue).

Kosher meat, produced by a local rabbi and ritual slaughterer, is sold here in some shops run by Muslims.

At the local Jewish school, a predominantly Muslim student body is taught to sing “Hatikvah,” Israel’s national anthem – reflecting the desirability of the school and a Jewish population that shrunk after the fall of the Soviet Union. Some 75,000 Jews left their former Soviet republic after its fall.

“We are brothers, the Muslims and the Jews, and we live like it, too,” says Yossif Tilayev, the makeshift rabbi of a Jewish population of 200 in Samarkand, Uzbekistan’s second city, and caretaker of its turquoise-domed, 19th-century synagogue, which is among Central Asia’s prettiest. 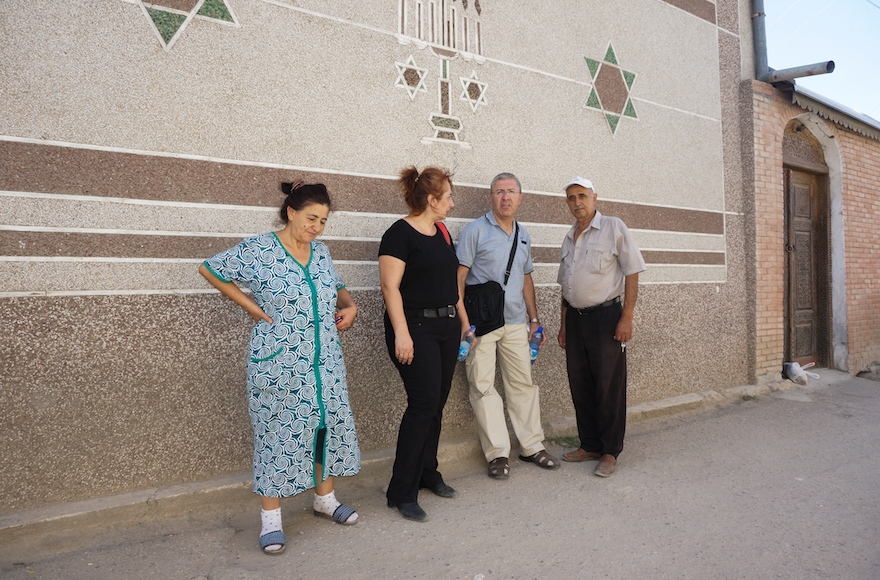 Tamara Tilayev, left, with with two community members and her husband, Yosif, right, outside the synagogue of Samarkand, Uzbekistan, Sept. 11, 2016. (Cnaan Liphshiz)

But to many, this record of coexistence is no guarantee against an Uzbekistani version of the interethnic and interreligious wars that have ravaged neighboring countries, including Tajikistan, Turkmenistan, Kyrgyzstan — and Afghanistan.

Even under Karimov, the Yakubovs from Bukhara have been feeling growing religious radicalization. While thousands of villagers moved into their city, the educated elite has largely left in favor of Tashkent, the capital. In 2014, this process of internal migration was slowed considerably after the government toughened its enforcement of regulations – internal visas known as “propiska” — that limit where citizens may live and work.

But the atmosphere in Bukhara is no longer the same as a decade ago, Shirin Yakubov says.

“I can’t go to the swimming pool like I used to 10 years ago because they stare at my bathing suit,” she says. “I don’t want my daughter wearing shorts because it’s beginning to attract too much attention. I no longer feel comfortable here.”

Her parents and three siblings already live in Israel, as do most of her husband’s siblings. Yakubov and her husband stay in Bukhara because her in-laws won’t leave, she says.

“But we will leave soon — and quickly, if anything bad happens after Karimov,” she says.

Yakubov is among the many locals Jews who believe that extremism is never too far below a surface that is kept calm only thanks to strict enforcement.

“We have everything – wahhabism, jihadism, Taliban. They just don’t show their faces, thanks to Karimov,” she asserts.

Arkady Isasscharov, the president of the Bukharian Jewish community of  Tashkent, partially concurs.

“You always have to be careful,” he says. “One rabbi was already killed here.”

The reference is to the suspicious death in 2006 of Avraam Yagudaev, a Jewish leader whose autopsy said he died in an automobile accident but who some believe was murdered.

Yossif Tilayev, the caretaker of the Bukharian synagogue in Samarkand, Uzbekistan, in its ornate sanctuary, Sept. 11, 2016. (Cnaan Liphshiz)

Still, Uzbekistani society “won’t let what happened in Afghanistan happen here,” says Issascharov, who served in Afghanistan as a soldier in the Red Army when Islamists led a rebellion against Soviet domination of that country in the 1980s. Soviet troops and the Taliban both carried out atrocities in that bitter conflict.

But tour guide Vadim Levin, an ethnic Russian of Jewish descent from Tashkent, isn’t so sure of his native country’s immunity to radicalism.

In the chaotic months following Uzbekistan’s independence in 1991 from the Soviet Union, Levin says he was beaten on the street for speaking Russian by “a gang of nationalists, religious extremist” ethnic Uzbeks looking for payback for Moscow’s long repression of religious and ethnic identities.

Karimov, the first ruler of an independent Uzbekistan, had gradually stepped up pressure on religious and other forms of extremism since then, restoring stability. But it came at the price of a free press and such basic individual freedoms as growing a beard – a frowned-upon practice that carries social penalties.

Israelis and other Jews, Levin adds, “tend to understand the trade-off better” than other Westerners because “they have seen the face of radical Islam, they have felt its shadow on them.”

“Of course, I pay with certain liberties for my country’s stability, I am aware of that,” says Levin, a homeowner and father of one who speaks three languages fluently and has visited Europe, Israel and the United States. “But it’s a trade-off I hope to be able to continue making under Karimov’s successor.”