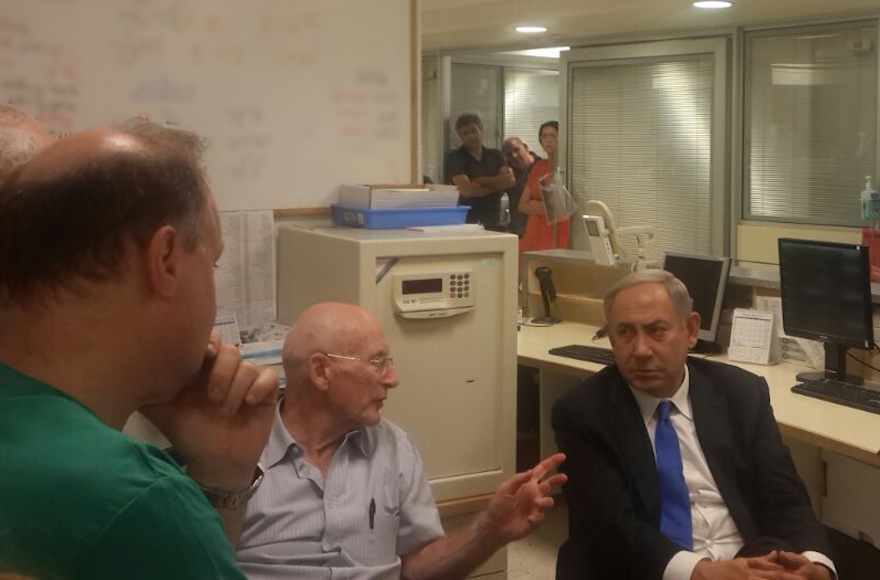 Israeli Prime Minister Benjamnin Netanyahu being briefed by staff at Chaim Sheba Medical Center at Tel Hashomer outside of Tel Aviv, Sept. 14, 2016 during his visit to the bedside of former Israel President Shimon Peres, who suffered a stroke on Sept. 13. (Office of the Prime Minister)
Advertisement

(JTA) — Israeli Prime Minister Benjamin Netanyahu visited the bedside of former President Shimon Peres, who is in stable but serious condition following a stroke on Tuesday.

A news release from the Prime Minister’s Office on Wednesday said Netanyahu spoke “at length” with Peres’ family and the medical staff at Chaim Sheba Medical Center at Tel Hashomer outside Tel Aviv.

In a statement released late afternoon in Israel, Yitzhak Kreis, director general of the Sheba Medical Center, said Peres was on a respirator and under sedation.

“He is still in a pretty tough condition,” Kreis said. “But he is stable and we see some improvement. He is conscious, he’s awake.”

Kreis added: “What I can say is that, even though we are still waiting, there is improvement and that is good.”

Peres, 93, had returned to the hospital for a checkup after having received a  cardiac pacemaker the week before. During the visit he suffered a hemorrhagic stroke, which included substantial bleeding on the brain.

Peres’ son-in-law, Rafi Walden, a physician, said Peres would continue to be sedated in order to ease his breathing and control his mood and blood pressure.

“I am pleased to say that he understands what is being said to him, is responsive, and even warmly squeezed my hand,” Walden said.

Netanyahu was shown in a photograph chatting with staff at a nursing station.

“I think that I speak for the entire Israeli people, as well as for many people outside Israel, who feel a certain relief this evening,” the prime minister said. “For myself, and for my wife, I can tell you, a great relief, because he is better this evening than he was yesterday evening and, with God’s help, he will be better still tomorrow evening.”