Burkini debate in France exposes a divide in its Jewish community 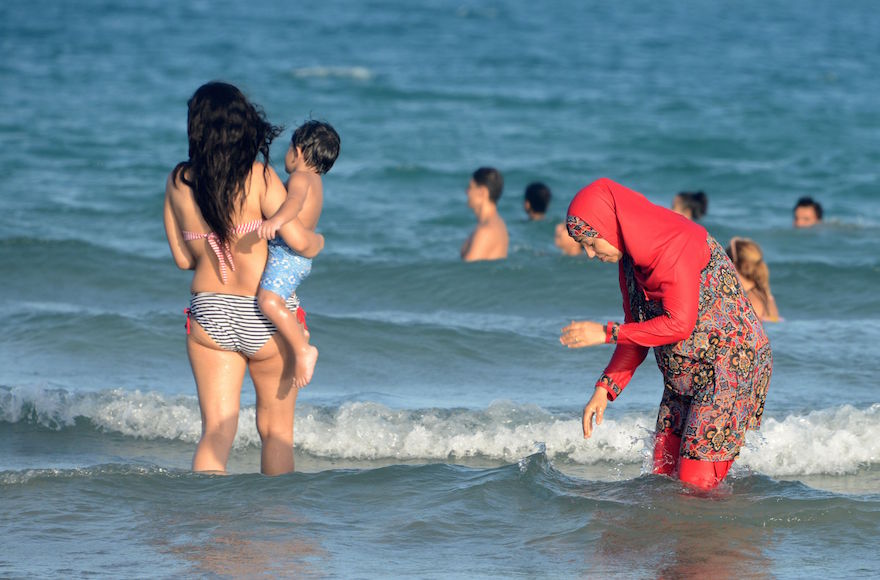 (JTA) — Like their constituents, the mainstream representatives of French Jewry are not known for passing up opportunities to express their opinion on subjects of national debate.

And Jewish institutions in France, like those in the United States, regularly comment on a host of issues, including divisive ones that lie beyond their immediate purviews.

The burkini ban was a notable exception.

In May, CRIF, the umbrella group of French Jewish communities, came out in support of police officers who had been accused by labor unions of brutality against protesters. And earlier this month, CRIF spoke out against bias attacks aimed at Asians in Paris.

Last year, at a Holocaust commemoration ceremony, French Chief Rabbi Haim Korsia urged the government to treat migrants from the Middle East according to the values of  “humanism, universality and sharing,” a move that angered many in a community and country traumatized by terrorist attacks by radical Muslims.

Yet the same establishment has remained either silent or equivocal throughout a highly polarizing debate on an issue with immediate implications for French Jews: the ban imposed by 30 municipalities against the donning of the full-body swimsuit called a burkini, which is favored by devout Muslim women because it conforms to their religious concepts on feminine modesty.

On Aug. 26, a French high court declared the bans illegal, setting precedent for other municipalities.

While nearly everyone in France, and seemingly the rest of the world, declared an opinion on the burkini, CRIF resisted calls to express a position for about a month. CRIF was mum even after its British counterpart, the Board of Deputies, labeled the ban’s enforcement in Nice “police harassment.”

It was only last week that CRIF President Francis Kalifat finally addressed the issue — but without taking a clear stand. He called for legislation that distinguishes between proper religious garb and symbols, and ones used politically.

Many French Jews see this ambiguity as a necessary compromise between religious freedom and national security. But the CRIF statement angered Jews across the political and communal spectrum. For some, the failure to vigorously defend minority religious rights showed moral infirmity by Jewish leaders and opened the door to action against Jews who wear distinctive clothing. According to this liberal critique of the establishment, the Jewish leaders set aside important civic principles only to avoid displeasing a rightist constituency and a government seen as beneficial to communal interests.

Other voices were unhappy that CRIF did not vigorously defend a prohibition that the government said was designed to counter the radical Islam that is threatening the very viability of French Jewry. Many of these critics, affiliated and direct constituents of mainstream French Jewish groups, have long argued that the communal bosses are living in ivory towers detached from the grinding reality of anti-Semitic violence.

The one prominent French rabbi who came out clearly in support of the ban, Moshe Sebbag, later backtracked, claiming quotes given to JTA were “taken out of context.”

The about-face by Sebbag, the head rabbi of the Grand Synagogue of Paris, reflects the dilemma facing French Jewish leaders who are under internal pressure from both sides of the burkini debate.

“The burkini issue has divided the nation — and its Jews,” said Yeshaya Dalsace, a well-known Conservative French rabbi from Paris. He denounced the barring of the swimsuit as “a ridiculous ban that erodes the state’s credibility,” though he conceded that the donning of a burkini at times is a “political statement.”

While the divisions make the silence of French Jewry’s establishment “understandable,” it “doesn’t demonstrate great courage,” said Dalsace, a progressive outlier and longtime critic of the Jewish establishment in France.

To Bernard Rozes, a columnist for the news site Causeur, French Jewry’s “ambiguous silence,” as he defined it, on the burkini issue is “a paradox” considering that religious Jews wear clothes similar to the burkini.

But the Jewish drive in France to adapt to Diaspora communities, he argued, means adopting the local ideal of laicite – strict separation between religion and state to the point of forbidding religion in the public domain. For French Jews, “the state is the law,” Rozes wrote in a column he penned Aug. 30.

But there may be more specific political reasons for French Jewish leaders to sit out the burkini debate.

Criticism on the burkini ban from the Jewish mainstream would be embarrassing to France’s hard-line prime minister, Manuel Valls, who supported the ban as a measure against radical Islam and who is considered one of the most pro-Israel and pro-Jewish French leaders in recent history.

But the French Jewish mainstream’s silence on the burkini ban does come with a price: It is alienating French Muslims. Amid radicalization and attacks by secularists and the far right on shared religious customs such as ritual slaughter and circumcision, interreligious cooperation is seen by many as more necessary than ever.

The Muslim Press news site is among several publications that called out French Jews for their position, or lack thereof, on the burkini.

“What is the difference between Muslim and Jewish traditional garb for women?” the news site asked in an op-ed on Aug. 29. “And why is one group allowed to display religious signs when another is not?”

Ultimately, though, the silence of French Jewry owed principally neither to hostility to Muslims nor fidelity to the state, but to an internal conflict on the issue, said Dalsace, the Conservative rabbi, whose Orthodox Jewish sister bathes in a swimsuit reminiscent of the burkini.

Among French Jews, the conflict defies division into blocs such as progressives vs. traditionalists or left vs. right, Dalsace said. Some left-wing seculars support the ban because they regard religious modesty as backward. Some haredi Jews, meanwhile, fear Muslim domination, but also worry that the ban would serve as a precedent for outlawing their own distinct garb.

“The community is divided, but so are the individuals who comprise it,” Dalsace said. “As for me, I’m torn between the desire to have a country where religious customs are respected and upheld, and the desire to live in a country whose residents don’t live in the shadow of jihadism.”