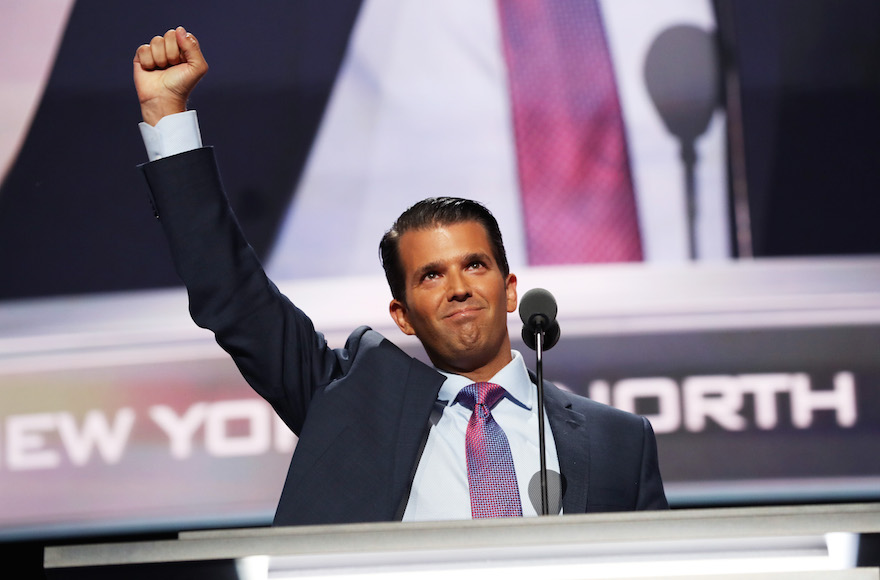 WASHINGTON (JTA) — Donald Trump Jr. was slammed by Democrats and the Anti-Defamation League for using the term “gas chamber” in a complaint about how the media treats Republicans and his father, the party’s presidential nominee.

“The media has been her No. 1 surrogate in this,” Trump Jr. said on a Philadelphia area radio talk show, referring to Hillary Clinton, Trump’s Democratic rival. “Without the media, this wouldn’t even be a contest, but the media has built her up,” he said, according to a report appearing on the CBS Philadelphia affiliate.

He said the media have “let her slide” on Clinton’s alleged lies.

“If Republicans were doing that, they’d be warming up the gas chamber right now,” the younger Trump said.

According to an NBC producer on Twitter, Micah Grimes, Trump later told Katy Tur, an NBC reporter, that he was referring to capital punishment, not to the Holocaust.

Already under fire on social media for the comment, his Jewish and Democratic critics were not buying the explanation.

“Everybody knows to what Donald Jr. was referring when he mentioned ‘a gas chamber,’ and there’s only one word for it: deplorable,” Rep. Eliot Engel, D-N.Y., the senior Democrat on the U.S. House of Representatives Foreign Affairs Committee, said in a statement sent to the media.

The reference was to Republican attacks on Clinton for describing half of Trump’s backers as “deplorables,” or bigots. Clinton said she regretted saying “half,” but she and other Democrats have stuck by the term “deplorable” to describe a range of Trump positions and supporters.

Jonathan Greenblatt, the Anti-Defamation League CEO, told Trump Jr. on Twitter that “trivialization of the Holocaust is out of line.”

Asked by JTA if he accepted Trump Jr.’s explanation that the reference was to capital punishment, Greenblatt replied: “Perhaps someone could ask if he knows which states use gas chamber as primary means of execution.” The answer is none, suggesting that Greenblatt believed Trump Jr. was being disingenuous.

Trump Jr., more than Trump’s other children, has been involved in a number of scrapes involving extremists or language deemed offensive. Last week he included in an Instagram posting a depiction of him and his father and other campaign backers posing heroically with Pepe the Frog, an image that in recent months has come to be identified with white supremacists.

Trump also has been criticized for his flirtations with the far right and utilizing its imagery.