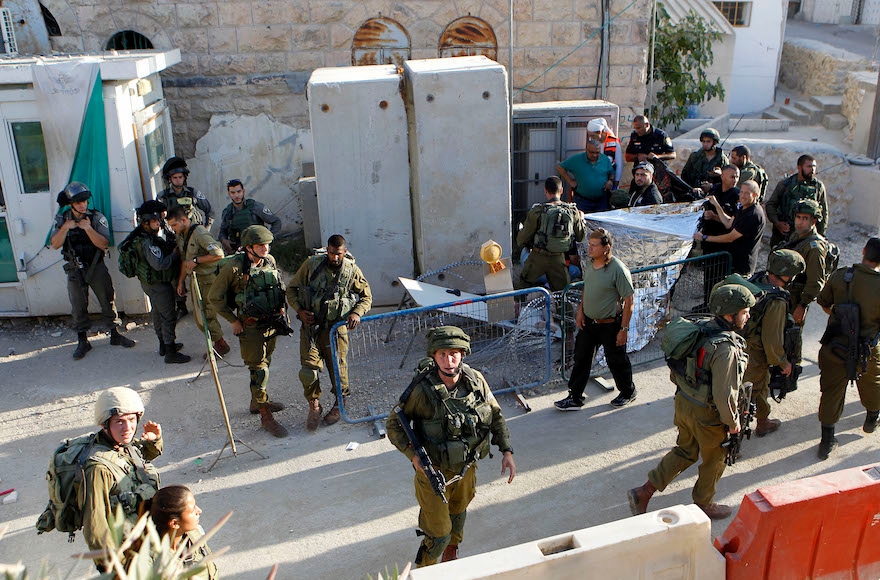 Israeli soldiers and medics at the scene where an Israeli soldier was stabbed by a Palestinian man in Hebron, Sept. 16, 2016. (Wisam Hashlamoun/ Flash90)
Advertisement

(JTA) — Israeli troops shot and killed a Palestinian man who stabbed a soldier in Hebron — one of several attacks reported on Friday.

The assailant had slashed the soldier in the face, The Times of Israel reported, citing the Magen David Adom emergency medical service.

Earlier, Israeli troops shot and killed a Palestinian who was trying to run over Israeli soldiers with a vehicle near Hebron, according to the Israeli army. A Palestinian woman in the car was critically wounded.

In eastern Jerusalem, Israeli troops shot and killed a man reported to be a Jordanian citizen who allegedly was trying to carry out a stabbing attack outside the Damascus Gate.

Also Friday, perpetrators threw rocks and glass bottles with paint at a bus between Jerusalem and the West Bank settlement Maale Adumim, lightly injuring the driver, according to The Times of Israel. Police were searching the area to find the attackers.

On Thursday, a 30-year-old Palestinian, Muhammad Ahmad Abed al-Fattah al-Sarrahin, died of gunshot wounds he sustained during a clash earlier in the day with Israeli forces that raided his village of Beit Ula in the southern West Bank district of Hebron.