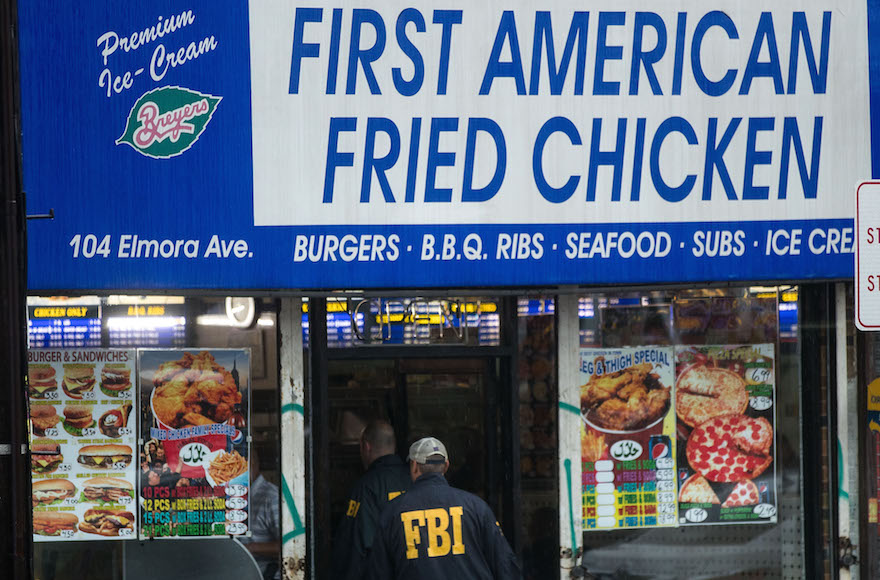 FBI officials entering a fried chicken store that is underneath the residence being investigated in connection to Saturday night's bombing in Manhattan, Sept. 19, 2016 in Elizabeth, New Jersey. (Drew Angerer/Getty Images)
Advertisement

(JTA) — A naturalized Afghan citizen wanted in connection with an explosion in a New York City neighborhood and at a New Jersey train station was taken into custody.

Ahmad Khan Rahami, 28, of New Jersey, was located and taken into custody in Linden, New Jersey, late Monday morning. He suffered a gunshot wound in an encounter with the police, The New York Times reported, citing law enforcement officials.

A manhunt for Rahami was launched earlier that morning, including a cellphone alert sent to New York and New Jersey residents. The FBI had described him as “armed and dangerous.”

A day after an explosion in the trendy Chelsea neighborhood of Manhattan that injured at least 29 people, five homemade pipe bombs were discovered overnight Sunday in a backpack at a train station in Elizabeth, New Jersey. One of the bombs exploded while being disarmed by a police bomb squad robot.

Rahami was seen on a surveillance video planting a bomb in Chelsea, and another made in a pressure cooker that did not detonate about four blocks away, the Times reported. He also may be connected with an explosion that detonated Saturday morning in a garbage can on the route of a Marine Corps charity run in Seaside Park, New Jersey. One of three pipe bombs placed in the receptacle blew up. The race was canceled.

An apartment about a mile from the train station located atop a restaurant believed to be owned by his family was raided early Monday morning by agents and members of the FBI’s Joint Terrorism Task Force.

Late Sunday night, police stopped a car near the Verrazano-Narrows Bridge in Brooklyn and took into custody five people connected to Rahami for questioning, according to The New York Times.

After calling the Chelsea explosion “intentional,” but with no proof of terrorist intent, New York City Mayor Bill de Blasio said Monday that the investigation into the blast is “definitely leading” toward terror.

Gov. Andrew Cuomo on Monday morning said on CNN that he “would not be surprised if we did have a foreign connection to the act.”