Emails and Facebook messages, some of which were from members of the Jewish community, sent to the JW3 center accused its staff of being “apologists for terror” and called Corbyn “a known collaborator with Hamas and Hezbollah,” The Jewish Chronicle reported. 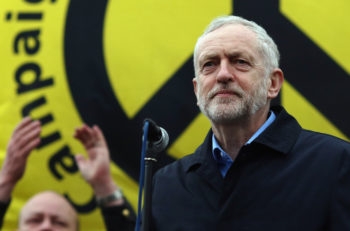 Senders were angry that JW3 had hosted a debate Sunday between Corbyn and Owen Smith, his challenger to lead the party. Corbyn has faced allegations that his pro-Palestinian politics and endorsement of radical anti-Semites has encouraged hate speech against Jews.

One of the messages referenced the assassination of Israeli Prime Minister Yitzhak Rabin in 1995 by a right-wing Jewish extremist Yigal Amir, who was incensed by Rabin’s signing of the Oslo Peace Accords with Palestinian leader Yasser Arafat.

“It was a lot of these messages coming from the same person, who then started posting them on social media,” JW3’s chief executive, Raymond Simonson, told The Jewish Chronicle.

“Some people were responding to that — a very, very small number, I should be very clear — very strongly agreeing, and making comments about ‘look what happens when a Jew associates with a known anti-Semite, look what happens. Look what happened to Rabin who associated with, shook hands with Arafat.'”

During the debate, which drew a crowd of hundreds, Corbyn faced questions from a Jewish audience about his party’s anti-Semitism problem, but refused to say whether Labour will kick out one of its most often accused offenders, former London Mayor Ken Livingstone.

Livingstone sparked outrage in April after saying in an interview that Adolf Hitler was essentially “supporting Zionism” when he called for the expulsion of Jews in 1932.

Dozens of Labour members have been suspended and several expelled from the party since February, when the British media began scrutinizing the proliferation of anti-Semitic incidents within Labour after the election last year of Corbyn.

In 2009, Corbyn called Hezbollah and Hamas his “friends,” a comment he later walked back. He has also called for boycotts against Israeli settlements.