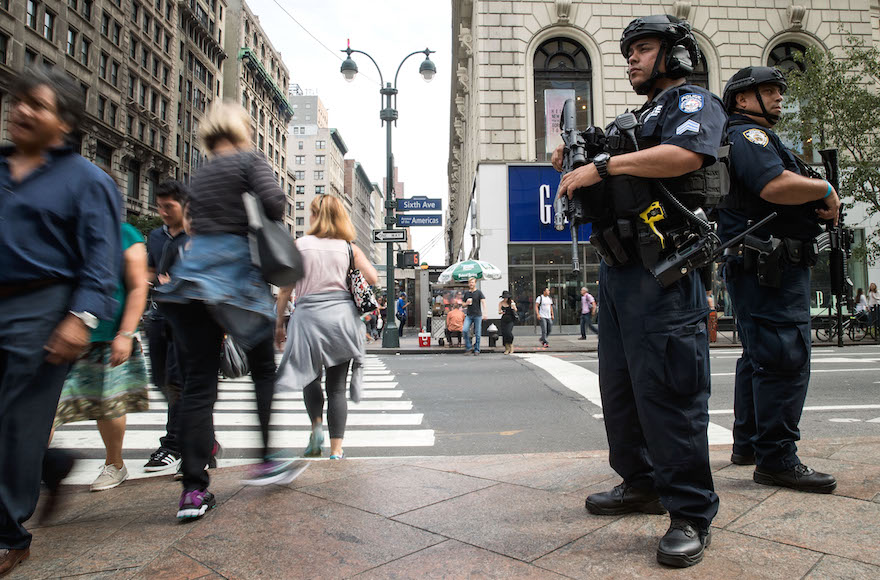 WASHINGTON (JTA) – Donald Trump wants to profile likely terrorists the way Israel does it. The problem is, Israel and the United States already profile in similar ways – and neither in the way Trump prefers.

The Republican presidential nominee’s proposal to blanket-profile entire communities would be unwieldy and pose thorny ethical problems, according to professionals who are familiar with law enforcement in both countries.

His formula reverses how law enforcement in the U.S. and Israel tackle terrorism prevention. Both first identify suspicious behavior patterns, then narrow the range of suspects by considering a number of demographic factors, including ethnicity or religion.

Trump, however, would start with a blanket profile of a huge religious or ethnic group, and then use the hammer of the state to intimidate the community and extract suspects from within.

Law officials say that method risks tarring – and alienating — entire communities and is far slower and less practical than focusing first on behavior.

In the aftermath of a bomb attack in New York City and several other aborted attacks in the vicinity, Trump on Monday proposed that U.S. law enforcement adopt what he believes is Israel’s system of profiling. And it wasn’t the first time.

“You know, in Israel, they profile. They’ve done an unbelievable job, as good as you can do.”

Trump did not mention “Muslims” in the interview, but he acknowledged it’s who he meant the last time he cited Israel as a positive example: in June, following the massacre at an LGBT club in Orlando.

In that instance, CBS interviewer John Dickerson asked the candidate directly about whether, when Trump said “profiling,” he meant Muslims in America. Trump agreed and drew the Israel comparison.

“Well, I think profiling is something that we’re going to have to start thinking about as a country,” he said, describing a security check he witnessed in which he said it would have made more sense to scrutinize those who “looked like” a perpetrator.

But they don’t do it by scrutinizing every member of an ethnic religious group, say experts.

“They will tell you they do not do that,” said Steve Pomerantz, the counterterrorism expert at the Jewish Institute for National Security Affairs and a retired FBI agent, referring to Israel’s security establishment. Instead, he said, they look for behavioral patterns, or what some call “predictive profiling.”

In both his professional capacities, Pomerantz has worked with Israeli law enforcement. (JINSA brings together Israeli and American police for brainstorming.) Focusing on an entire community instead of individuals gets it backwards, he said.

“If I was looking at gathering intelligence on the threat of terrorism, would I be looking at that community more than others? You bet,” Pomerantz said, referring to Muslims. “But treating an individual based solely on their ethnicity is another issue altogether.”

Gathering intelligence on ethnic communities where terrorists might proliferate means cultivating sources within that community, according to U.S. law enforcement officials who have tracked terrorism in recent years. That means establishing trust with community and religious leaders.

Identifying an entire community as suspect, Trump’s preferred method, would likely crush any inclination toward cooperation.

After a Muslim couple carried out a massacre in San Bernardino, California, in December, Trump charged that members of the area’s Muslim community knew the pair were radicals but failed to notify authorities.

“When you look at, when you look at people within the Muslim community and where people are living and they don’t report, and a good example of that would be San Bernardino,” he told CBS in June.

BuzzFeed has debunked the claim that the Muslim community in San Bernardino was aware of what the couple were planning.

Speaking later the same month on conservative talk radio, Trump said he would pressure entire communities to hand over those they believed to be planning nefarious acts.

Including ethnicity or religion as a factor makes sense, said Daniel Wagner, a consultant on risk management who has praised Israel’s practice of training airport security personnel to identify suspects through anomalous behavior. He said that law enforcement, as soon as the bomb went off in Manhattan on Saturday night, likely focused on white supremacists as well as Muslim radicals.

Singling out radicals within ethnic or religious communities makes sense, but generalizing about broad communities does not, Wagner said.

“The issue here is when people are scared and fearful, they start to contemplate things they wouldn’t otherwise contemplate,” he said of support for broad ethnic profiling. “Trump is playing on people’s deepest darkest fears.”

There are differences between how the U.S. and Israel pursue terrorists.

“I suspect that wouldn’t be highly thought of here,” she said.

In both countries, however, the willingness to consider ethnicity and faith among a range of factors in identifying threats has led to allegations of excess and abuse.

But there is no equivalent to Trump’s proposal that the state presume an entire community guilty until proven otherwise. Israel facilitates visits by Muslims from overseas to holy sites and for treatment in its hospitals, often in the absence of diplomatic relations. Muslims serve in Israel’s parliament, on its judicial benches and in its diplomatic corps. Similarly, Muslims enjoy a thriving public profile throughout New York’s civil society and law enforcement.

If Muslims are to be singled out in the United States, it should be for welcome and accommodation, said Rabbi Jill Jacobs, who directs T’ruah, a human rights group.

In the current season’s textual readings, “We’re deep in a section of the Torah on what we’re supposed to do when we’re in our own land,” Jacobs said.

“We’re not supposed to hate the Egyptians or Edomites, although it might be tempting because of our history with them,” she said. “We are responsible for those who are vulnerable by virtue of ethnic affiliation even if they look like a group we have some bad history with.”