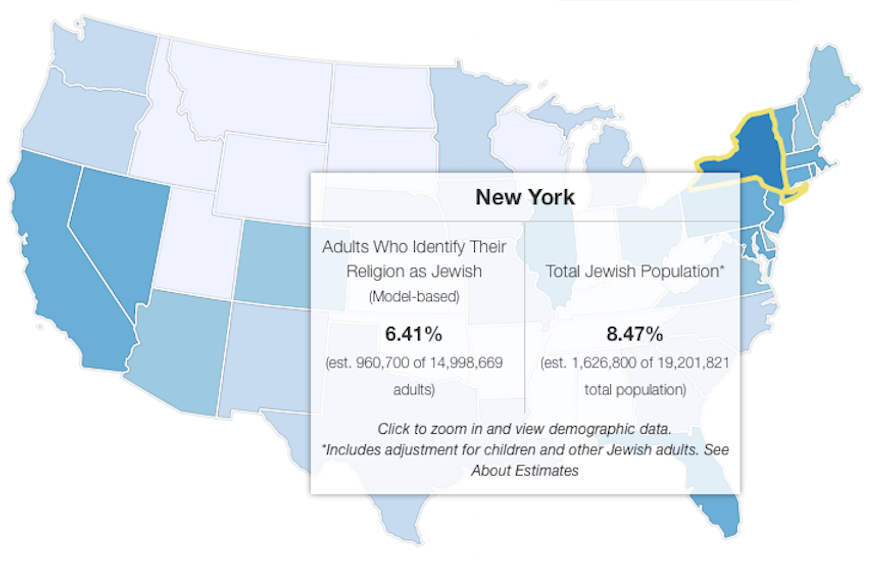 The study, released Thursday and conducted by the Steinhardt Social Research Institute at Brandeis University in suburban Boston, found that in Bucks County, Pennsylvania — one of the areas closely watched this election cycle — Jewish adults make up more than 6 percent of the population.

Jewish voters have a record of higher-than-average turnout.

“If it’s a tight race,” Parmer said, “Jewish voters could swing the election” in that county.

The study also shows how the Jewish vote could have significant impact in Florida’s Palm Beach area, where the 209,400 Jews there make up nearly 15 percent of the adult population, according to the study.

That number is significant in a state where President Barack Obama won by less than 1 percent in 2012, or 74,309 votes.

But only 43 percent of American Jews call themselves liberal, a lower percentage than those who say they are Democrats.

The results also show that 36 percent of American Jews consider themselves neither liberals nor conservatives, and that 32 percent identify as neither Democrats nor Republicans.

The American Jewish Population Project’s latest report, which is based on population figures from 2015, includes new data on gender and race, as well as population profiles for major metropolitan areas on the East Coast, West Coast and Chicago.

The study and updated map is based on nearly 250 independent samples of the U.S. adult population collected from 2008 to 2015. This includes more than 280,000 respondents, of whom nearly 6,000 are Jewish.

The institute’s director, Leonard Saxe, along with Parmer and the population project’s director, Elizabeth Tighe, sat down with JTA in advance of the release of the data to talk about the numbers.

Among the most notable findings is the diversity among Jewish millennials — young adults aged 18 to 34. The study puts the number of millennial Jews at 1.4 million.

The study also finds perhaps surprising diversity among the younger Jews, with 19 percent identifying as non-white. That’s more than double the figure for Generation X, the previous cohort.

The information is relevant at the local level, where most Jewish community surveys do not include the racial breakdown, said Parmer, who noted the diversity in two New York City boroughs: Nearly 12 percent of Manhattan’s Jews identify as non-white, while in the Bronx, the figure swells to nearly 30 percent. He said this has implications for the political issues they care about, like social justice and racial inequality.

Overall, the study estimates that 4.2 million adults identify as Jewish “by religion.” Adding Jewish adults who identify in some other way plus an estimate for the number of Jewish children results in an overall population estimate of 7.16 million.

Saxe noted the challenges of estimating the Jewish population: the small sample size, the absence of religion data in the U.S. Census and disagreement about criteria for determining who is a Jew.

The population of Jews who identify by religion is consistent with the 2013 Pew Research Center’s “Portrait of Jewish Americans,” whose results were factored into the study.

“The population is continuing to grow,” Saxe said. If you read media reports, “you might think the sky is falling and that we are continuing to see declines in the Jewish population, and that’s not the case.”

Other highlights of the study include:

* More than 1 in 10 Jewish adults identify as a person of color.

* More than one-quarter of Jewish adults are 65 years of age or older.

The researchers say that the study’s state-by-state analysis could be useful in understanding the Jewish dynamics of November’s presidential election.