At the UN: Abbas slams inaction, Netanyahu says ‘war against Israel’ over 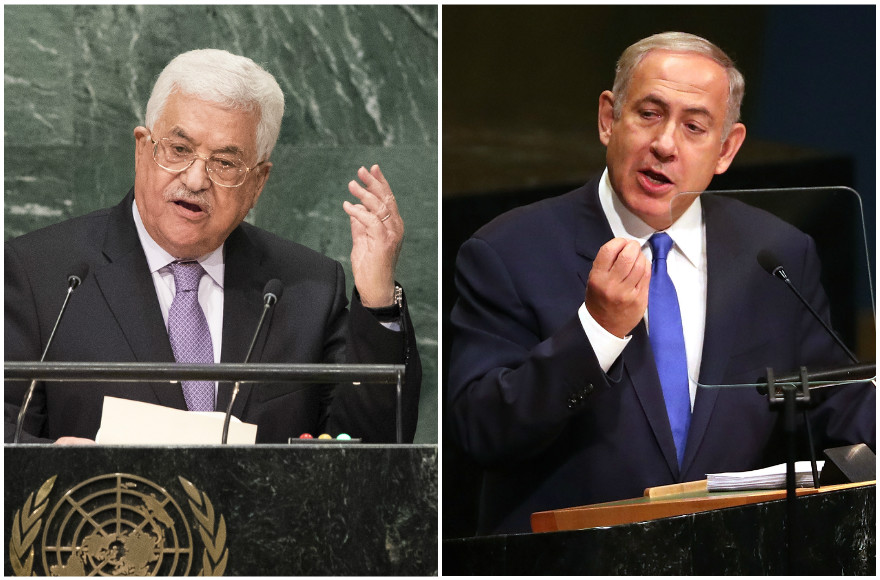 NEW YORK (JTA) — At the United Nations, Palestinian Authority President Mahmoud Abbas said he would push for a resolution condemning West Bank settlements, while Israeli Prime Minister Benjamin Netanyahu said ties between Israel and the rest of the world were improving and that “the war against Israel at the U.N. is over.”

Speaking to the crowd of international leaders in New York on Thursday, Abbas continually blasted Israel’s occupation of Palestinian lands, while also criticizing the U.N. Security Council for not coming down harder on the Jewish state’s settlement expansion.

In his speech, during which he kept emphasizing that the Palestinian Authority was “the sole representative of the Palestinian people,” Abbas said the P.A. will push for a resolution condemning Israeli settlements and that he hoped “no one will cast a veto against this draft resolution.”

“What the Israeli government is doing in its pursuit of its expansionist settlement plans will destroy whatever possibility and hopes are left of the two-state solution on the 1967 borders,” he said.

Abbas, who referred to Palestine as “a state under occupation,” also said Britain should apologize for signing the “infamous” Balfour Declaration, a 1917 letter that declared its support of Israel as the Jewish homeland.

The declaration, he said, “paved the road for the nakba,” an Arabic term referring to Israel’s victory in its war of independence and the displacement and dispersal of Palestinians that resulted.

The Palestinian leader also appealed to countries who had not yet recognized Palestine as a state to do so.

“Those who believe in the two-state solution should recognize both states, and not just one of them,” Abbas said.

Netanyahu, meanwhile, told the international leaders that their governments at home were changing their views of Israel for the better.

“The change will happen in this hall because back at home your governments are rapidly changing their attitudes toward Israel, and sooner or later that’s going to change the way you’re voting on Israel in the U.N.,” he said after blasting the international body’s past condemnations of Israeli policy.

The Israeli prime minister cited improved ties with African and Asian countries, but said relations with neighboring countries were the most significant change.

“The biggest change in attitudes towards Israel is taking place elsewhere, it’s taking place in the Arab world,” he said, calling peace treaties with Egypt and Jordan “anchors of stability” in the Middle East.

Netanyahu said he welcomed “the spirit of the Arab Peace Initiative,” a nod to Saudi Arabia, which initiated the peace proposal that has not been accepted by Israel.

He mocked Abbas’ call to  launch “a lawsuit against Britain” over the Balfour Declaration, saying it was as “absurd” as suing Abraham for buying land in Hebron in the Bible.

But Netanyahu also said he was open to dialogue, inviting Abbas to speak in the Knesset and saying he would be open to speaking to the Palestinian parliament in Ramallah.

In his speech, which came a day after he sat down with President Barack Obama, Netanyahu also emphasized the strong bond between Israel and the United States.

“We never forget that that our most cherished alliance, our deepest friendship, is with the United States of America, the most powerful and most generous nation in the world,” he said, adding that while “the U.N. denounces Israel, the U.S. supports Israel.”