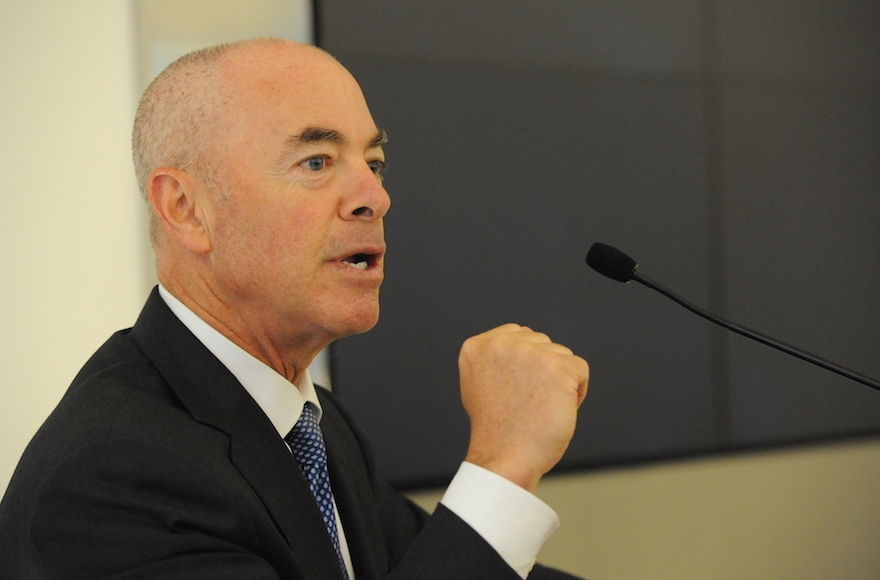 WASHINGTON (JTA) — Painting a grim picture of Jewish vulnerability in the United States, a top U.S. security official said that the vast majority of funds earmarked to secure nonprofits goes to Jewish institutions because their need is the most acute.

He said the threat had shifted in the past year from the relatively small number of Americans who were radicalized overseas to homegrown extremists whom the Islamic State terrorist group had reached through the internet. Mayorkas said the FBI was tracking more than 1,000 suspected extremists across the U.S.,  and they were to be found in all 50 states.

“They find great access to a radicalizing Islam” on the web, he said of the homegrown extremists. “They find what they believe is purpose and meaning in their life.”

“The need is most acute in the Jewish community because of the ascension of anti-Semitism and hate crimes we see,” he said.

In past years, more than 90 percent of the funds have gone to Jewish groups. The FBI reported last year that 57 percent of reported anti-religious hate crimes had an anti-Jewish bias.

Mayorkas challenged Jewish leaders to raise awareness about potential threats, hire better-trained security staff, add protections at Jewish institutions, train the community in its response to an active shooter, establish relationships with local police and increase cybersecurity. He said hackers could access personal information about Jewish children who are affiliated with Jewish organizations and use it to target them.

He said his trepidation was in part formed by his upbringing. Mayorkas’ mother is a Romanian Jew who survived the Holocaust and moved to Cuba after marrying a Cuban Jew. They moved to the United States following the Cuban revolution.

Among the things that “keep me up at night,” he said, was the threat to “my community,” the Jewish community, he said.

“I come from a tradition of a lack of security instilled in me as a very young person,” he said.

Mayorkas said extremism was rising across the world.

“We live in a time of increasing concern, not diminishing concern. If one takes a look at some of the political leaders gaining ascension across the globe, it does not give me comfort with respect to the Jewish community,” he said, stressing that he was referring to foreign leaders and not domestic politicians.

Mayorkas also urged leaders to contact Paul Goldenberg, who heads the Secure Community Network, the security arm of the Jewish Federations of North America, to learn more about how to secure their institutions.

The Orthodox Union, together with the Jewish Federations of North America and Agudath Israel of America, has spearheaded lobbying for the funding of the nonprofit security grants. The group at its dinner awarded Mayorkas and Sen. John Hoeven, R-N.D., the chairman of the Homeland Security appropriations subcommittee in the Senate, with framed duplicates of George Washington’s letter to the Jews of Newport, Rhode Island, for their roles in advancing the program.