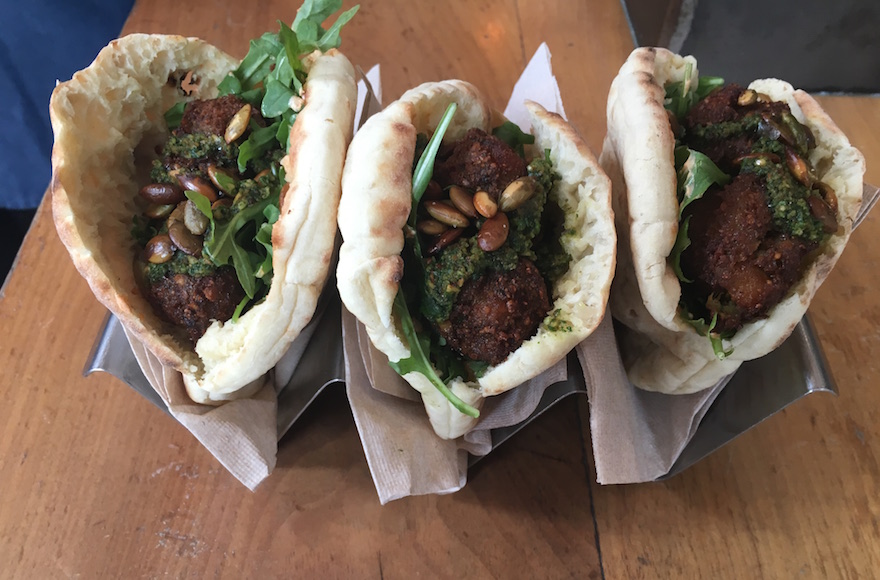 New Yorkers will soon be able to snack on “Food Network” star Amanda Freitag’s unique twist on falafel — and JTA got an advance taste of her mouthwatering creation.

Freitag’s fall-themed dish, available in October at New York’s popular Israeli restaurant, Taïm, includes falafel balls with pieces of melt-in-your mouth butternut squash. There’s a spicy kick, thanks to a harissa yogurt dressing, and roasted pumpkin seeds provide some crunch. All the ingredients — plus some enlivening fresh arugula— are stuffed generously into a traditional pita.

“I wanted pepperiness, I wanted sweetness, and a little bit of nuttiness from the pumpkin seed,” Freitag told JTA on Wednesday at a tasting at Taïm’s Nolita outpost.

Freitag isn’t the only high-profile chef who’s creating a one-of-a-kind falafel dish for the restaurant. Fellow celeb chefs like Bobby Flay and Scott Conant are participating in the yearlong falafel festival, organized by Taïm’s owner and head chef Einat Admony.

Each month the restaurant — which also has a location in the West Village, as well as a food truck — serves up one chef’s falafel creation, and $1 from each sandwich sold is donated to the charity of the chef’s choice. Freitag chose God’s Love We Deliver, a New York-based volunteer organization that provides food to those suffering from severe illnesses.

The guest chef series began in September with Mario Batali, who served up white bean and fennel pollen falafel with spicy jalapeño peperonata. Proceeds benefitted the Mario Batali Foundation, which seeks to ensure “all children are well read, well fed and well cared for.”

Freitag, for her part, spoke enthusiastically about participating in the festival — and about Jewish food.

“I’m not [Jewish] but I am at heart, because I love all this food, the flavors, and I love eating Passover dinner,” she said, adding that she might be joining Admony at her next seder.

The two chefs have been friends since 2009, when Admony competed in the hit cooking competition show “Chopped,” and Freitag served as a judge.

“I’ve been a fan ever since,” Freitag said of the Israeli chef.

Admony said she loves seeing how different chefs, including Freitag, transform falafel. “I get so inspired,” she said. “So far it’s going so well, I’m very excited.” 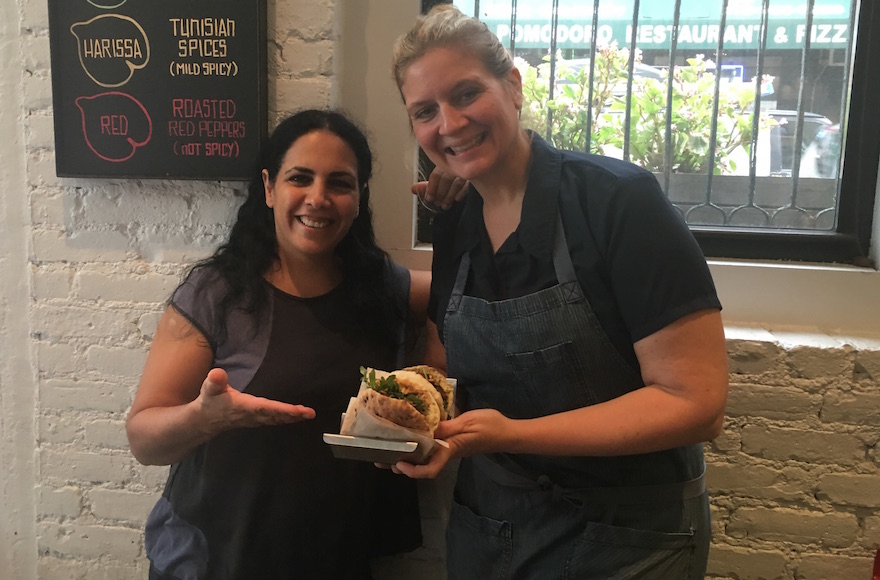