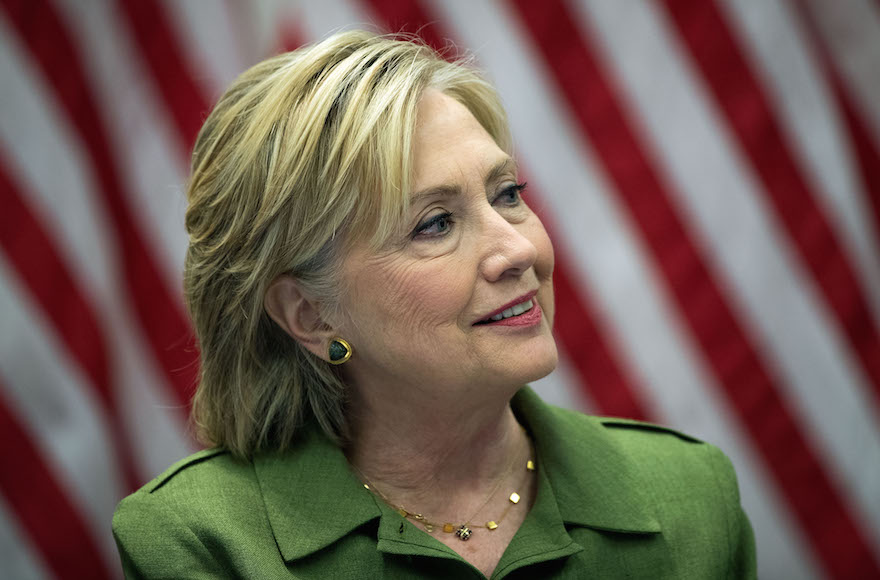 WASHINGTON (JTA) — Hillary Clinton spoke with Jewish supporters in a Rosh Hashanah-themed get-out-the-vote call, urging them to help her build “a country consistent with our best selves.”

“The High Holy Days are a time to reflect on the last year, take a hard look at personal and collective priorities, and ask ourselves how we can do better in the year ahead,” the Democratic presidential nominee said Thursday on a call that her campaign said reached 1,000 supporters. “To build a country that is consistent with our best selves, a country that is big enough for everyone.”

Clinton did not mention her rival, Republican nominee Donald Trump, but her campaign’s pitch to the Jewish community has emphasized Trump’s broadsides against immigrants and minorities and his disparaging references to some women.

Clinton also spoke of her meeting earlier this week with Israeli Prime Minister Benjamin Netanyahu, saying she told him that she would always “stand up for Israel’s security and continue to work for peace.” Netanyahu also met with Trump.

The former secretary of state expressed her sadness in the 10-minute call at the death this week of Shimon Peres, and noted her husband, former President Bill Clinton, would join the delegation to the funeral for the former Israeli president and prime minister led by President Barack Obama. She closed her remarks with “Shanah Tovah.”

Rabbi Julie Schonfeld,  the executive vice president of the Conservative movement’s Rabbinical Assembly, opened the call casting the responsibility to vote as a religious one.

“The choices we each make in these coming weeks will not only determine how we personally are inscribed in the Book of Life this year but will affect people around the world for many years to come,” said Schonfeld, spoke in a personal capacity. “We are with you Secretary Clinton because the Jewish community knows that we are always stronger together.”

“I’m with her” and “Stronger together” are Clinton campaign slogans.

The Clinton campaign’s chief Jewish outreach official, Sarah Bard, closed the call with a an appeal for volunteers to register voters, man phone banks and knock on doors.