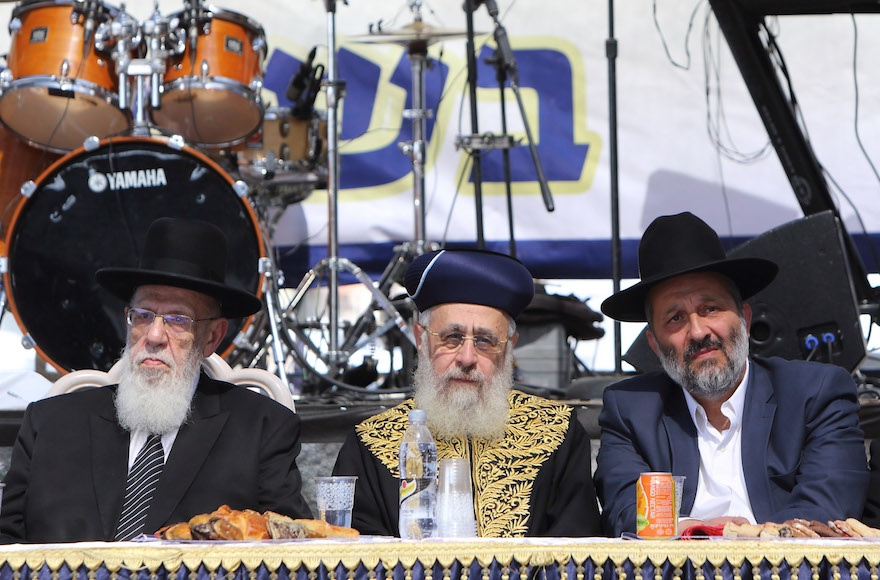 JERUSALEM (JTA) — The haredi Orthodox parties are back in power, and Israelis aren’t thrilled with their work.

An annual survey shows widespread dissatisfaction with haredi influence and exemptions when it comes to education, the army and religious life.

After being left out in 2013, Shas and United Torah Judaism entered the governing coalition in 2015. In the first Knesset session since the election, they thwarted laws that challenged their state-sponsored way of life, forced a political and transportation crisis over work on Shabbat and blocked the creation of a pluralistic prayer section at the Western Wall.

The Israel Religion and State Index, published Sunday, shows just how far these and other government actions are from the views of most Israeli Jews. The Smith Polling Institute conducted the survey of 700 Israeli Jewish adults at the end of July for Hiddush, a group that supports religious freedom in Israel. The survey has a 4 percent margin of error.

“The Index reveals the Government’s total disregard for the public’s will regarding matters of religious freedom and equality of civic burden. The divide between the will of the public and the Government Coalition’s actions is increasing,” Hiddush CEO Uri Regev said in a statement accompanying the survey.

Overall, 81 percent of Jews are dissatisfied with the government’s approach to issues of religion and state, a slight increase over last year. While dissatisfaction is high among all types of Jews, the number of haredi Jews who say they are satisfied doubled to 39 percent this year, from 19 percent last year — apparently thanks to their parties’ impact in government. Fully 51 percent of Shas voters are satisfied.

Here are some other results from the Hiddush survey worth considering.

Last month, Prime Minister Benjamin Netanyahu bowed to pressure from the haredi political parties and canceled repair work on Israel’s railway lines that was scheduled for Shabbat. As a result, angry Israelis faced massive congestion during their weekday commutes.

Trains and most other forms of public transportation come to a halt on the Jewish Sabbath, by national law.

There have been several attempts at Shabbat compromise over the years. In July, four Knesset members put forward a bill that would allow limited public transportation on Shabbat, as well as cultural events and entertainment and the operation of restaurants, cafes and convenience stores, which already happens in many places.

But the Hiddush survey found little enthusiasm for such a compromise. Ninety-four percent of haredi Jews are opposed along with 70 percent of religious Zionists. So are 35 percent of secular and traditional Jews.

In July, just after the Hiddush survey was conducted, the government reversed a 2013 law that would have slashed state funding for some haredi schools over their failure to teach the core curriculum. The reversal was agreed at the governing coalition’s founding.

But the public would clearly have preferred the penalties stay in place. Seventy-two percent of Jews support reducing funding to yeshivas that don’t teach math, English, science and civics, the survey found. Thirty percent would also make not teaching the core curriculum a crime.

Even 14 percent of haredi Jews and 29 percent of Shas voters back this requirement. As the reversal of the funding law was making its way through the Knesset, hundreds of haredi parents signed a petition to Education Minister Naftali Bennett demanding the establishment of alternative haredi Orthodox schools where their children could learn the core curriculum.

The government budget for yeshivas was also doubled in 2015 compared to the prior year. Seventy-nine percent of Jews — and 86 percent of non-haredi Jews — favor canceling the budget or reducing it significantly.

The Israeli government in January approved a deal that allows for an upgraded pluralistic prayer section at the Western Wall. But haredi leaders later turned against the plan, and it has not been implemented.

Reform and Conservative American Jews were the main backers of the deal, with Israelis paying relatively little attention. Still, when asked, 66 percent of Jew voice support for it, according to the Hiddush survey. The support comes from less stringently religious Jews.

Fifty-five percent of Jews say they would use the new pluralistic prayer section if it were completed, with 34 percent favoring it over the existing haredi controlled prayer section.

On the other hand, 96 percent of haredi Jews and 76 percent of national religious Jews oppose the deal.

In November 2015, the Knesset rolled back 2014 reforms that were to largely end the exemption of haredi yeshiva students from compulsory army service. The haredi political parties demanded the legislation on their return to the governing coalition earlier in the year.

Jewish and other non-Arab Israelis are eligible to be drafted into the Israel Defense Forces after high school, but haredi yeshiva students have historically been exempt.

Hiddush has found similarly high levels of support for haredi service since 2010, when it first began asking the question. But only 28 percent of Jews want all yeshiva students to serve in the army, indicating openness to a limited exemption for Torah scholars.

At the same time, a small but significant minority of haredi voters supports requiring their yeshiva students to serve: 23 percent of Shas and 15 percent of United Torah Judaism voters.

In addition to skipping the army, about half of haredi men continue to study rather than going to work. For the first time this year, slightly more, 52 percent, worked than didn’t, according to the Israeli government. But 79 percent of Jews would like to increase the workforce participation rate among haredi men to somewhere between two-thirds and 100 percent.

Perhaps surprisingly, 52 percent of Shas and United Torah Judaism voters support the government giving preference to those who are working or seeking work when it comes to benefits.