In second debate, Trump says Syria regime is not worth confronting 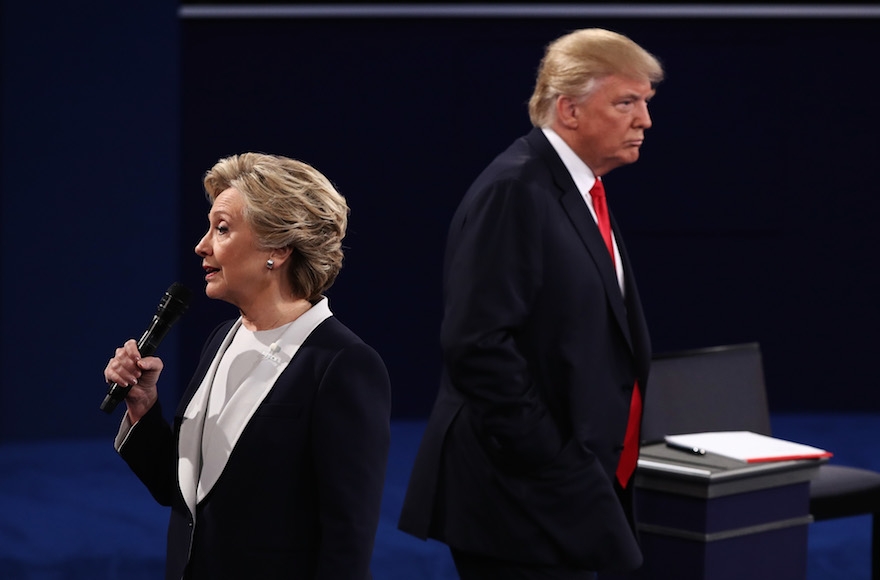 WASHINGTON (JTA) — Donald Trump said the U.S. focus in Syria should solely be on the Islamic State terrorist group, arguing that the Assad regime is not worth confronting because its allies, Russia and Iran, effectively control the country.

Trump, the Republican presidential nominee, in the second presidential debate — held Sunday night at Washington University in St. Louis, Missouri — turned a question about what he would do to end the carnage in Syria into an extended attack on his rival, Democratic nominee Hillary Clinton.

He said that she had advised President Barack Obama to back down in 2013 from his “line in the sand” threat to attack Syria if it uses chemical weapons and Clinton corrected him, noting that she was no longer secretary of state at the time.

Trump then described the situation as he saw it in Syria, but offered no specific prescriptions. He suggested that the Bashar Assad regime, principally responsible for the nearly half-million lives lost since the outbreak of civil war in 2011, was not all bad because it was targeting the Islamic State terrorist group, along with its allies, Iran and Russia.

One of the moderators, ABC’s Martha Raddatz, pressed him for a policy answer, noting that his running mate, Indiana Gov. Mike Pence, said that if Russia continues to back Assad with airstrikes on civilian targets, the United States should hit Assad’s military targets.

“He and I haven’t spoken, and I disagree. I disagree,” Trump said, referring to Pence. “I think you have to knock out ISIS. Right now, Syria is fighting ISIS. We have people that want to fight both at the same time. But Syria is no longer Syria. Syria is Russia and it’s Iran, who she made strong and [Secretary of State John] Kerry and Obama made into a very powerful nation and a very rich nation, very, very quickly, very, very quickly.”

Trump was referring to the deal reached last year between Iran and six major powers led by the United States trading sanctions relief for Iran in exchange for rolling back its nuclear program. Clinton, who set the stage for the deal by helping to set up the sanctions regime that induced Iran to join the talks, says it has effectively kept Iran from becoming a nuclear weapons power.

Israel is wary of most of the likely outcomes in the Syrian civil war, but one of those it fears most is effectively conceding part of a failed state to Iran, allowing its deadliest enemy in the region to remain indefinitely on its doorstep.

Trump again accused Clinton of being overly unfriendly to Russia.

“I think it would be great if we got along with Russia because we could fight ISIS together, as an example,” he said.

Clinton advocated during the debate confronting both ISIS and the Assad regime through training rebels, creating no-fly zones and allying with Syrian Kurds. She noted that the Assad regime and its Russian ally have mostly targeted non-ISIS rebel targets.

As she has previously, Clinton alluded to the mutual admiration that Trump and Russian President Vladimir Putin have expressed for one another, and to U.S. government allegations that Russia is intervening in the U.S. elections by hacking and releasing embarrassing emails related to the Democrat’s campaign.

“I want to emphasize that what is at stake here is the ambitions and the aggressiveness of Russia,” she said. “Russia has decided that it’s all in, in Syria. And they’ve also decided who they want to see become president of the United States, too, and it’s not me.”

The debate, in a town hall format, was unusually bitter, with Trump at one point threatening to jail Clinton over the controversy of her use of private email while she was secretary of state, should he be elected president.

It came on the heels of a bombshell video released Friday in which Trump in 2005 is heard bragging to an entertainment reporter about groping women and getting away with it because he is a “star.” In discussing the tape and the Republican politicians who rescinded their endorsements of Trump in the past 48 hours, including Arizona Sen. John McCain, Clinton said Trump’s campaign was “exploding.”