Trump vs. Clinton, Round 2: Iran, Syria, dog whistles and deplorables 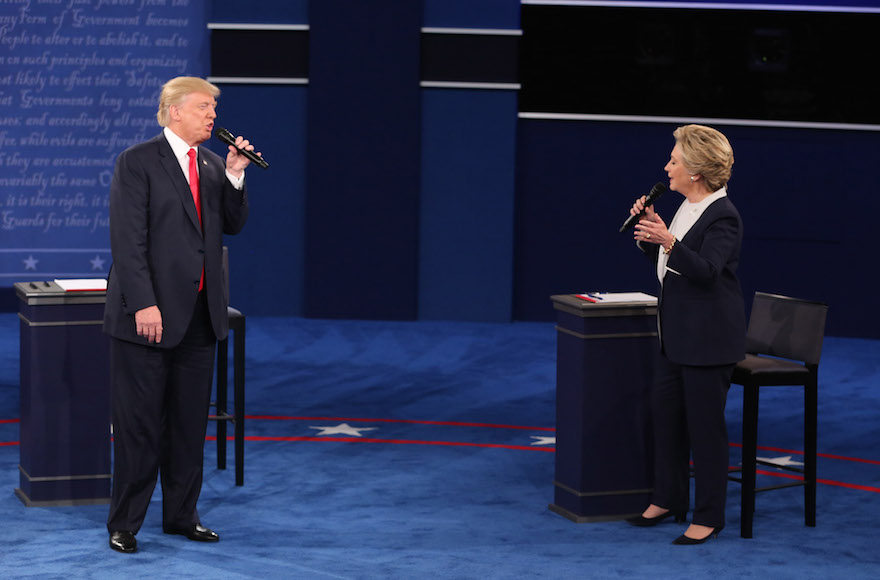 Hillary Clinton and Donald Trump did not shake hands, and then they did. The Republican nominee called his rival the devil and said he would jail her. Clinton said that three minutes of a 2005 video in which Trump bragged about committing what constitutes sexual assault “represents exactly who he is.” He said it was “locker room talk” and – pressed hard by a moderator – said he did not commit the acts that he claimed in the video.

Those “highlights” from the debate are strewn throughout social media and are making headlines on Monday morning.

But sown throughout Sunday evening’s presidential debate at Washington University in St. Louis, already dubbed the most intensely negative in modern history, were notes of substance and tone. Jewish and pro-Israel readers may want to heed a number of them.

The deal reached last year between Iran and six major powers led by the United States, which exchanges sanctions relief for rollbacks in the Iran nuclear program, has become the Trump campaign’s exhibit A in depicting the Obama administration as a foreign policy failure.

On Sunday night, Trump called it “the dumbest deal perhaps I’ve ever seen in the history of deal-making” and again said it converted Iran within three years from a weak nation to a powerful one.

It’s a notable transition: Throughout the Republican primaries, Trump said the agreement was a bad one, but was coy about whether he would rescind it, saying he would first consult experts once he was in office. It wasn’t a foreign policy priority like renegotiating trade deals or walling off Mexico.

Now the deal has become a front-and-center issue, and while Trump still is not specific on whether he would scrap the agreement altogether or attempt to renegotiate it, it is nearing the top of his to-do list.

Clinton’s main foreign policy thrust was to remind viewers of Trump’s coziness with Russian President Vladimir Putin and present herself as a tougher alternative. She mentioned the Iran deal as a means of showing that she is capable of cooperating with Russia, while confronting it as well.

“It’s how we got the sanctions on Iran that put a lid on the Iranian nuclear program without firing a single shot,” she said of her role as secretary of state in getting a reluctant Russia on board with the sanctions regime.

The Democrat’s notation was not the seven robust mentions her running mate gave the deal in last week’s debate. Kaine, who is close to J Street, the liberal Jewish Middle East policy group that backed the deal, was instrumental last year in shepherding the deal through Congress.

Clinton instead has emphasized her role in setting up the sanctions regime and has also sought to present herself as more of a hawk than President Barack Obama. The latest dump of hacked Clinton-related emails includes one from an adviser, Stuart Eizenstat, counseling just such a distancing on the Iran deal last year.

“Hillary cannot oppose the agreement given her position as the President’s Secretary of State and should urge its approval by Congress,” Eizenstat said in an email to Clinton’s top foreign policy adviser, Jake Sullivan. “But she can and should point out concerns with it … More broadly, she should appear more muscular in her approach than the President’s.”

Trump delivered a rambling and at times inchoate response when a moderator asked him what he would do to stop the carnage in Syria.

One clear takeaway: He does not want to confront the regime of Bashar Assad, which is principally responsible for the nearly 500,000 lives lost in the civil war that has ravaged the country since 2011. Instead, he said, the United States should solely be focused on hitting the Islamic State terrorist group. Trump said, as he has in the past, that Russia should be a partner in that enterprise. He also said he outright disagreed with Pence, his running mate, who last week said the United States should hit Assad’s military if Russia continues to slam civilians with airstrikes.

More alarmingly for Israel, Trump appeared to say that Syria is otherwise a lost cause and should be left to Assad and his allies, Russia and Iran.

“I think you have to knock out ISIS,” he said. “Right now, Syria is fighting ISIS. We have people that want to fight both at the same time. But Syria is no longer Syria. Syria is Russia and it’s Iran.”

Israel sees few good outcomes in the Syrian war. One of the worst, though, is leaving Iran, its deadliest regional enemy, indefinitely in place on its northern border.

The Syria exchange provided a notable moment for Clinton as well. Not only did she robustly differentiate herself from Obama, counseling a no-fly zone and increasing arms and training for some rebels, the sole moment she interrupted Trump (he interrupted her 18 times, according to Vox) was when he charged that she was with Obama when he violated his “line in the sand” pledge to use the military to hit Assad should his regime use chemical weapons. Assad crossed that line and Obama blinked in 2013.

Clinton pointed out that she was no longer secretary of state in 2013.

“I was gone,” she said. “I hate to interrupt you, but at some point we needed to do some fact checking.”

Ears were perked up. Was Donald whistling?

Trump, whose mentor was Roy Cohn, a counsel to the Wisconsin Republican Sen. Joseph McCarthy in the 1950s, has exhibited a McCarthy-like penchant for guilt by association.

Many of the associations he cited Sunday evening were Jewish. Among them: Sidney Blumenthal, Clinton’s longtime friend, whom Trump (again) falsely blamed for having “started” the so-called birther rumor that Obama was born in Kenya — a rumor that Trump more than anyone else perpetuated (one mention); Debbie Wasserman Schultz, the Democratic National Committee chairwoman forced out when hacked emails revealed her antipathy toward Clinton’s primaries rival, Bernie Sanders (two mentions); financier, philanthropist and Democratic Party donor George Soros, cited by Trump as, like him, a rich guy who takes advantage of tax loopholes (two mentions), and Goldman Sachs, the Jewish-founded bank that paid Clinton top dollar for her speeches (one mention).

Was Trump’s substantive following among anti-Semites within the alt-right paying attention? Jewish Twitter sure was and, like the notorious Star of David tweet and the Pepe the Frog meme, Trump may have been passing along names and themes that mean more to the alt-right than he is aware of or is willing to acknowledge.

This pointless repeated invocation of “Sidney Blumenthal” increasingly seems like an attempt to invoke the Jewishness of his name.

On the other hand, Trump did not start the false rumor about Blumenthal and the Kenya birth; Wasserman Schultz was indeed DNC chairwoman, and her “victim,” in Trump’s narrative, Sanders, also is Jewish; Trump mentioned the non-Jewish billionaire Warren Buffett, another Clinton backer, when he brought up Soros, and while Goldman Sachs is only one of a number of banks that hosted Clinton, the most salient leaks in the recent batch of hacked emails were from her appearance at an event hosted by Lloyd Blankfein, the bank’s CEO.

The moderators asked Clinton about her comment last month at a fundraiser that half of Trump’s followers were “deplorables” motivated by race hatred, among other factors. At the time the former New York senator almost immediately apologized for saying it was “half,” and now she appeared to say it was down to one, Trump.

“My argument is not with his supporters,” she said. “It’s with him and with the hateful and divisive campaign that he has run, and the inciting of violence at his rallies, and the very brutal kinds of comments about not just women, but all Americans, all kinds of Americans. And what he has said about African-Americans and Latinos, about Muslims, about POWs, about immigrants, about people with disabilities, he’s never apologized for.”

Trump countered that “she has tremendous hate in her heart.”

Did Trump miss the Jewy moment?

As long as we’re circling back to the juicy bits, there was one moment I predicted would take place – but it didn’t go down exactly the way I thought.

It was a town hall forum, where undecided voters were supposed to ask questions (they kind of got lost in the sniping among the candidates and the assertive questioning by the moderators). One who stood out was the final questioner, Karl Becker, who asked: “My question to both of you is, regardless of the current rhetoric, would either of you name one positive thing that you respect in one another?”

“I think that’s a very fair and important question,” Clinton said, going first. “Look, I respect his children. His children are incredibly able and devoted, and I think that says a lot about Donald. I don’t agree with nearly anything else he says or does, but I do respect that. And I think that is something that as a mother and a grandmother is very important to me.”

Trump’s reply was that Clinton was a “fighter” who “doesn’t give up” (a little at odds with his multiple jabs about her “stamina”). But he appeared reluctant to accept Clinton’s reply as the compliment it was.

It was an odd reply: Clinton was not saying that his good children were an anomaly, or that they turned out well in spite of him. “That says a lot about Donald,” she said, presumably crediting his parenting. (Chelsea and Ivanka are good buddies, so Clinton presumably knows whereof she speaks.)

Donald, parenting is the hardest job there is. When someone says you’ve made a good go of it, just run with it.