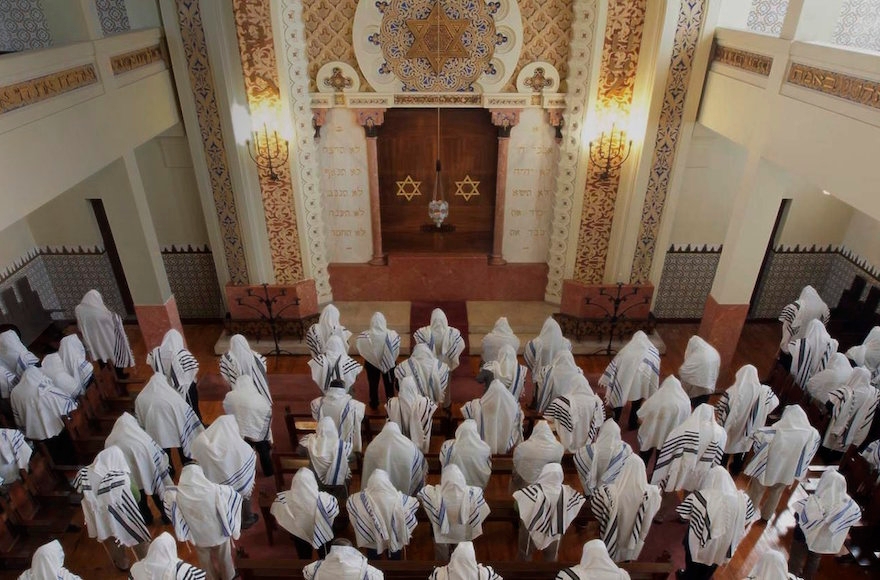 Congregants praying at the Kadoorie - Mekor Haim synagogue in Porto, Portugal, May 2014. (Courtesy of the Jewish Community of Porto)
Advertisement

(JTA) — Nearly 5,000 people have become citizens of Spain or Portugal following the passing of laws in both countries on the naturalization of descendants of Sephardic Jews.

In Portugal, where a procedure for naturalization under the law went into effect last year, 292 applicants for naturalization have been approved, Catarina Madeira, a spokeswoman for the Portuguese Justice Ministry, told JTA on Wednesday.

Spain has naturalized 4,538 applicants for citizenship by Sephardim since the law went into effect last year. However, only three applicants were granted citizenship based on the actual law, the ABC daily reported Sunday. Others were naturalized by a royal decree and not through the nondiscretionary procedure devised for the law.

According to ABC, the Spanish government in effect blocked the nondiscretionary procedure to avoid mass immigration by an estimated 30 million non-Jewish descendants of Sephardim eligible under the law.

In both countries, the passing of the laws of return for Sephardim was described as an attempt to atone for the state and church-led mass expulsion, dispossession, torture and forced conversion into Christianity of Jews during the Inquisition — a period that began in the 15th century and ended with the disappearance and dispersion of what used to be one of the world’s largest Jewish communities. In both countries, the legislation followed an economic recession that led to high unemployment and vigorous attempts by Lisbon and Madrid to attract wealthy investors, residents and tourists.

Unlike the open-ended law in Portugal, the Spanish law set a three-year window for applications. The Spanish law is also stricter than the Portuguese one, as it requires passing tests attesting to cultural or language ties to Spain by applicants. Spanish authorities are currently processing another some 3,000 applications for naturalization under the law.

Portuguese authorities have approved only 7.5 percent of the 3,838 applications filed since March 2015, Madeira said. A bureaucratic block that had caused delays in the naturalization process was removed in February, she added.

In Portugal and Spain, each application is vetted by the institutions of those countries’ Jewish communities, which make recommendations to the government.

“The difference between the applications approved and those pending owes to the fact that each request for naturalization requires rigorous evaluation of documents,” Madeira said.