Can Trump learn a thing or two from Netanyahu’s old video scandal? 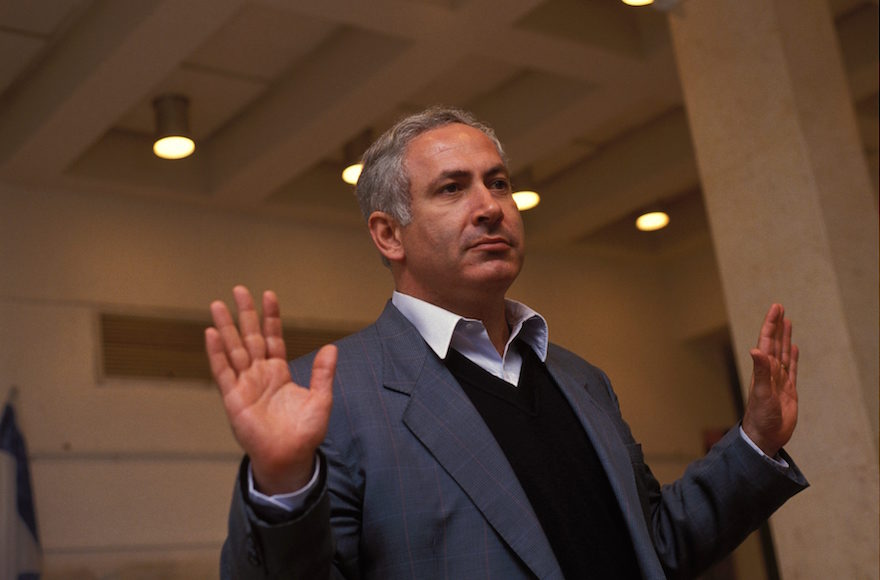 A videotape, a sex scandal and an impending election.

Israel has seen it all – or maybe not so much seen it, because in this videotape scandal there turned out to be no videotape.

The episode, which took place in 1993 when Benjamin Netanyahu was a front-runner for the Likud party leadership, might provide a lesson to beleaguered Republican presidential nominee Donald Trump as he faces his own tale of the tape.

In January of that year, Netanyahu booked time on an evening news broadcast to respond to an anonymous tip that there was a video of him engaged in an extramarital affair.

In contrast to Trump, Netanyahu did not deny his well-established reputation for scandalous behavior, or pretend the reputation was irrelevant, as Trump has done. Rather, Netanyahu owned it, was contrite and moved on — eventually to lead Israel’s opposition and then become prime minister.

At first blush, Netanyahu’s gambit on that Thursday evening seemed hapless and desperate. An anonymous caller had told his third wife, Sara, that there was video of the affair and was threatening to release it. In the news broadcast, Netanyahu confessed to the affair.

It was a bizarre confession: Israel was (and still is, in some ways) a small country, and extramarital dalliances by politicians were the stuff of common knowledge, but not news broadcasts or headlines. (We tend to forget that Israel’s primary Western alliance and influence through the mid-1960s was France. Among other lasting effects, along with a chansonnier tradition, was a relative nonchalance about politicians and sex.) Few thought that “hakaletet halohetet,” the hot tape, would have any effect on the party primaries in the first place.

As a JTA correspondent put it at the time, much of the Israeli reaction was amusement.

Netanyahu intimated in the broadcast and in a complaint to the police that his principal rival to lead the party, David Levy, the once and future foreign minister, was behind the blackmail attempt. Levy furiously denied it.

In the end, no videotape emerged, although rumors persisted that it existed – Israel Radio at one point reported erroneously that a copy had been delivered to Israel TV. A driver (it always comes down to the help) who had a foot in both the Levy and Netanyahu camps (i.e. he chauffeured both men) said he made up the story to make Netanyahu look good. (See note above on nonchalance about sex and politicians.) No one believed him.

There are differences between the Trump and Netanyahu scandals. In Netanyahu’s case, the sex, taped or not, was consensual — the revelation led the paramour’s husband to file for divorce. Trump was caught on tape in 2005 describing what amounts to nonconsensual assault.

There’s a class equation in both scandals, too, but it is reversed. Netanyahu’s conflict with Levy brought to the forefront longstanding tensions between the established class of Ashkenazi Likud founders, like Netanyahu’s father, and the disenfranchised North Africans, like Levy. Rebuffed by the Labor establishment, “Mizrachim” like Levy found a less than comfortable fit with the Likud. Netanyahu kept alluding to the “mafia ties” of his alleged blackmailers, a dog whistle other Israeli Ashkenazi Jews were likely to hear as anti-Mizrachi. Trump, for all his inherited wealth, has been embraced by working-class Republicans rising up against the establishment.

And Netanyahu handily won the primaries and was elected prime minister in 1996. We’ll know more about Trump after Nov. 8.

But there is a lesson for Trump in how Netanyahu handled it: Whether or not the tape was real, he got ahead of a potential scandal. He owned his roguish persona, he was contrite, and he rededicated himself to his family (Netanyahu is still married to Sara). Plus: His smear of Levy as a mafia-like extortionist may have worked. Levy’s best chance at leading the country was forever dashed when Netanyahu overwhelmingly won the primaries.

Megyn Kelly, the Fox News anchor, tried to get Donald Trump to do a Netanyahu at the first Republican primaries debate in August 2015 when she asked him about his own sketchy history with women. Instead of seeing her question as a lifeline — giving him the chance to neutralize a line of attack sure to be adopted by Hillary Clinton and her supporters — Trump treated Kelly with scorn, only reinforcing his reputation as contemptuous of women.

If hakaletet halohetet ever does emerge in some kind of grainy glory, Israelis will shrug — ancient history, next please. Trump was bound to be haunted by a reputation for boorishness because he never truly renounced it; if anything, he doubled down. So when the 2005 video cropped up last week, the collective reaction is not so much “so what” but “enough.”

Republicans, by the way, should take heart: As riven as Likud was in 1993, the party never imploded. In 1998, Netanyahu named Levy to his second tour as foreign minister. Orly Levy, his glamorous daughter, is now part of Netanyahu’s ruling coalition.