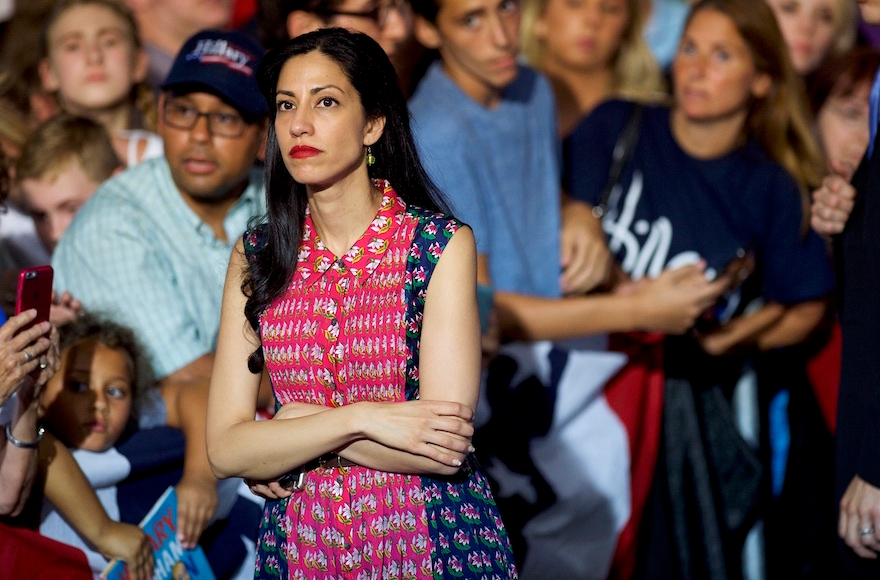 (JTA) — Hillary Clinton staffers fretted over getting behind her daughter Chelsea’s mother-in-law in a 2014 congressional race, an email thread uncovered by WikiLeaks revealed.

According to the latest cache of hacked Clinton emails released by WikiLeaks, the Democratic presidential candidate’s top aide, Huma Abedin, tried to arrange a conference call that year with other staffers to discuss how to deal with the campaign of Marjorie Margolies, Politico reported Wednesday.

Margolies, whose son Marc Mezvinsky is married to Chelsea Clinton, was running for a House of Representatives seat in Pennsylvania left open by Allyson Schwartz, also a Democrat. She was attempting to resurrect a career that took a hit when Margolies’ husband, former Iowa congressman Edward Mezvinsky, was convicted of $10 million in financial fraud in 2000.

Margolies represented Pennsylvania’s 13th District from 1993 to 1995 but lost in her re-election bid. After runs for the state’s lieutenant governor and U.S. senator, she and her husband declared bankruptcy shortly before Mezvinsky’s conviction.

The emails suggest that the Clinton camp struggled over whether or not to publicly associate with Margolies’ 2014 campaign and thus take sides in a Democratic primary.

“Can you get a conference call at 2pm this Wednesday to discuss Margorie’s [sic] primary in PA? We were hoping to avoid getting involved but now that it is less than a month out, and her campaign is not doing as well as she had hoped, we are getting increasing pressure to help,” Abedin wrote in an email thread to some of Clinton’s other top aides, including John Podesta, Cheryl Mills, Philippe Reines, Minyon Moore, Tina Flournoy and traveling press secretary Nick Merrill.

“The NYT (Amy Chozick) is about to write a story and is specifically asking if Clintons plan to provide additional help and her story may run soon,” Abedin added, citing The New York Times’ interest in the story.

One month after the emails were sent, Hillary Clinton held a fundraiser in New York in support of Margolies, according to Politico.

Margolies did not attend the fundraiser and finished second in the Democratic primary to the current officeholder, Rep. Brandon Boyle.

Chelsea Clinton married Marc Mezvinsky in 2010. The couple are raising their two children in both Jewish and Clinton’s Methodist traditions.

Trump vs. Clinton: Battle of the Jewish sons-in-law