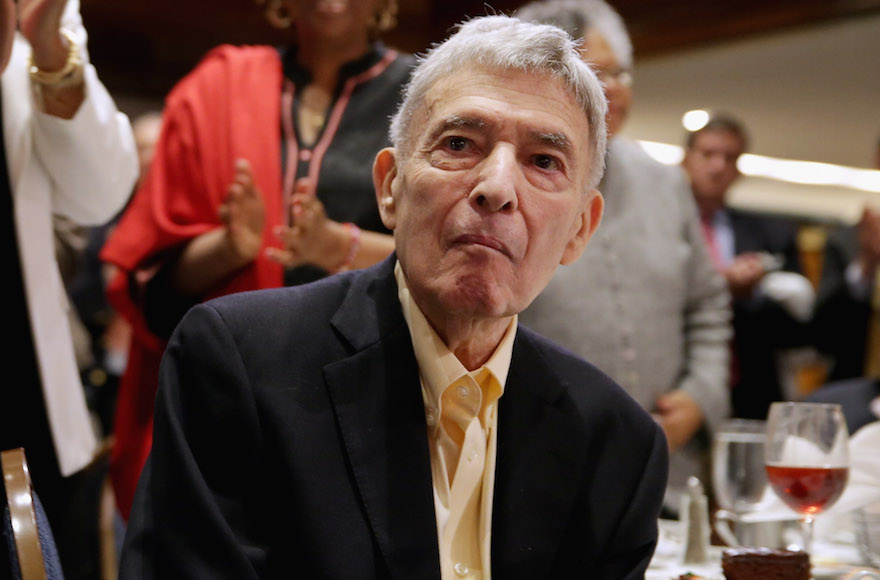 Attorney and legal scholar Jack Greenberg, 89, receiving a standing ovation from the audience at the NAACP Legal Defense Fund's luncheon to commemorate the Supreme Court's 1954 Brown v. Board of Education decision in Washington, D.C., May 16, 2014. (Chip Somodevilla/Getty Images)
Advertisement

Greenberg had been suffering from Parkinson’s disease, said his wife, Deborah Cole Greenberg, according to The New York Times. He died Wednesday in Manhattan at 91.

The son of Jewish parents from Poland and Romania who immigrated to the U.S., Greenberg was a pioneer in the civil rights movement of the 1960s and 70s who fought for equal rights for disenfranchised African-Americans.

He was the last surviving member of a group of lawyers assembled by Thurgood Marshall who argued for voting rights, equal pay and access to schooling for African-Americans.

Greenberg was one of seven lawyers who argued against segregated schools in Brown v. Board of Education, leading to the Supreme Court’s 1954 ruling to end single-race public schools.

After Marshall was appointed to serve on the Supreme Court in 1961, he tapped Greenberg to lead the NAACP Legal Defense and Educational Fund. Greenberg served in the role for more than 20 years. The appointment rankled some who wondered why Marshall had not picked an African-American lawyer, The New York Times reported.

Greenberg also was involved in controversy with Jewish groups for his support of affirmative action. The Anti-Defamation League said the policy, which favors minorities for university admission and employment, discriminated against whites.

In 1963, he represented King when the civil rights leader was jailed in Birmingham, Alabama, for protesting against segregation.

Greenberg was born in 1924 and grew up in Brooklyn and the Bronx boroughs of New York City. He earned bachelor’s and law degrees from Columbia University, and served as the dean of its law school in 1989-93.

Greenberg said he wasn’t driven by his religion to fight for civil rights but more by his upbringing in the socialist Zionist movement of Jews who had immigrated from Eastern Europe.

“We were social activists,” he said. “Back then we’d call them socialists; now you’d call them liberals.”