When my synagogue banned my baby on Yom Kippur 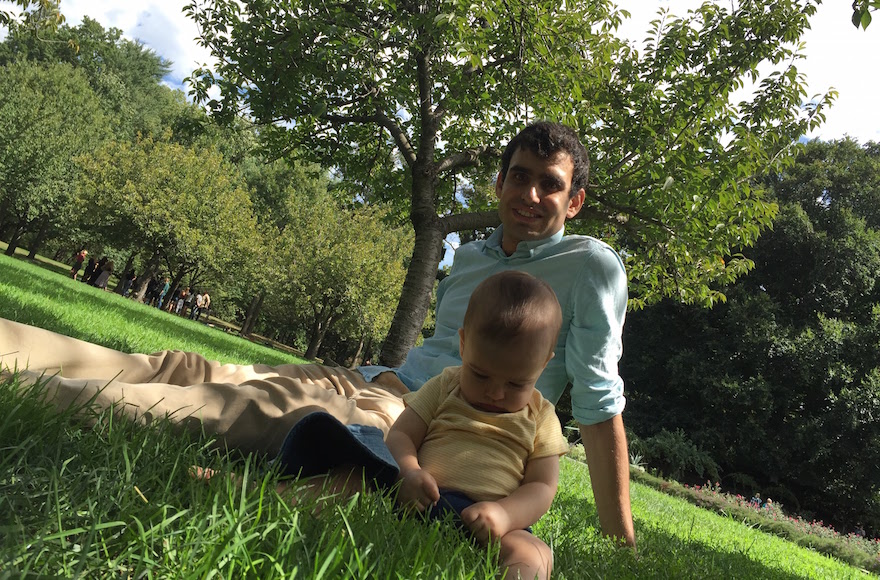 CHICAGO (JTA) — Why did my synagogue ban my baby?

It had been more than a decade since I attended my hometown synagogue for Yom Kippur, and it was my first time as a father, so I didn’t know what to expect. But I never imagined standing in the lobby, holding my baby and praying on my own while more than a thousand people sang together in the sanctuary.

My wife and I had arrived at the Conservative shul in suburban Chicago around 10 a.m. to spend time with my grandmother — our 9-month-old’s great-grandmother. The formal, cantorial service wasn’t really our style, but we followed bubbe’s lead, going to the most accessible place for her.

Only it wasn’t accessible to us. After handing over our tickets, the usher stuck out a palm when he saw our stroller: No babies allowed until noon, he said.

The synagogue technically made space for young children. The problem was, it wasn’t where we were — there was a parallel service a mile away at a public middle school, where kids could roam free. There was also a children’s service beginning shortly in another room. But to be with my grandmother, my wife or I would have to give up being with our son.

It was a jarring surprise. The main reason we had come to the synagogue was so my grandmother could spend the Jewish calendar’s holiest day with one of her great-grandchildren. The night before, Kol Nidre, had felt especially meaningful as my wife and I held him in our arms. But that morning, we ended up having to take half-hour shifts: one of us sitting with bubbe, the other outside, in the lobby, with our baby.

Our family recently moved back to the U.S. after four years in Israel, and the reverse culture shock can feel especially acute at synagogue. The concept of High Holiday tickets and ushers is foreign at most synagogues in Tel Aviv. Our congregation there was almost built for kids. They ran around in the aisles and grabbed their parents’ legs while they led services. Our friends and neighbors clamored to hug and hold our son when we first brought him on a Saturday morning. Only occasionally were kids shushed — gently.

The synagogue we attend in New York — like many American synagogues — is exceedingly kid-friendly. But our Yom Kippur experience isn’t isolated.

Our first month in New York, we were summarily kicked out of a different synagogue when our baby cried. Rabbi Menachem Creditor, in San Francisco, wrote an essay two years ago admonishing worshippers for creating a hostile climate for parents and kids. Writing at our sister site, Kveller, in February, Rochelle Kipnis recalled a congregant asking her to leave the service because her daughter was singing the prayers. A very informal Facebook survey of my friends revealed several similar experiences.

“If you feel the urge to react to the sound a child makes in a sanctuary, please know that you are welcome to walk out until that feeling subsides,” Creditor wrote. “Children are cherished parts of our spiritual lives, not distractions from it.”

This clash isn’t new — these ushers, shushers and parents are perpetuating a centuries-old fight between decorum and kid-friendliness at synagogue.

A 16th-century guide on synagogue etiquette during the Ottoman Empire said small children should not attend services. According to Jonathan Sarna, an American Jewish history professor at Brandeis University, beginning in the 19th century, synagogues in Europe and America that wanted a more formal feel would discourage any disruption of the prayers — including crying or children’s banter. Because nearly all synagogues were non-egalitarian until the 20th century, women and small children would often stay at home.

“Synagogues felt that Jews were being judged on the basis of decorum,” Sarna said. “They became deeply sensitive to having children there because you couldn’t have the kind of atmosphere and decorum you wanted if you had children who would cry at inappropriate moments and the like.”

As the 20th century progressed, American synagogues took on an expanded function, and the so-called “shul with a pool” proliferated. Parents joined a synagogue when their children entered school, and synagogues were seen as a central vehicle for keeping children connected to Judaism — but not necessarily in the sanctuary. So while Hebrew schools and social halls would welcome children, many prayer services still insisted on decorum.

“The emphasis was a pediatric one,” said Jack Wertheimer, an American Jewish history professor at the Jewish Theological Seminary, referring to mid-century synagogues. “We know perfectly well that people join synagogue when they have children of school age. We know that a high percentage of them drop out of synagogue life when their young child has celebrated a bar or bat mitzvah.”

Now, Wertheimer and Sarna both say, there is an increasing trend of welcoming children. The Reform and Conservative movements don’t have official policies on allowing children in High Holiday services, but both encourage making children feel comfortable. Concerns over losing the next generation have pushed synagogues to invite children to services in the hopes that growing up in a sanctuary will help the children stay there as adults.

“The pendulum has swung a lot more in the direction of wanting to find ways to include children, to have children present in the shul,” Wertheimer said. “Rabbis particularly are aware that [discouraging children] can be a self-destructive way to go.”

On Yom Kippur afternoon, after my grandmother went home to rest, we joined my parents at another synagogue. During the closing service, my son and I both began to get tired: I from fasting, he from, well, being a baby. He squirmed in my arms, shifting positions every few seconds and letting out the occasional cry.

Yes, it was a little disruptive, particularly as the service crescendoed to a close. But while I got a few bemused looks, no one seemed to mind.