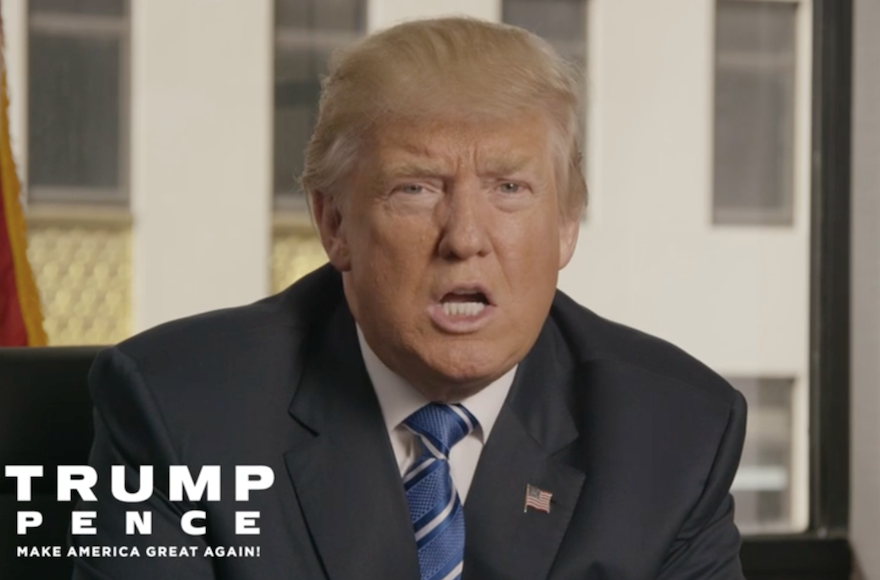 JERUSALEM (JTA) — Donald Trump’s campaign debuted a video at a Republican event in Jerusalem linking the “honor and respect” for Jewish values the candidate says he learns from his family to his support for Israel.

The one-minute video aired Wednesday night at a Republicans Overseas Israel event on the rooftop of the Harp of David restaurant overlooking the Western Wall and Temple Mount in the Old City.

“For me, respect and reverence for Judaism is personal. My daughter Ivanka and my son-in-law Jared are raising their children in the Jewish faith, always reminding me the important values and lessons we learn about leadership, resolve and families in Jewish tradition,” Trump says in the video, referring to his eldest daughter, who underwent an Orthodox conversion before marrying real estate magnate and newspaper publisher Jared Kushner in 2010.

Several hundred Israeli supporters were on hand for the Republicans Overseas Israel event, headlined “Jerusalem Forever,” which the group said was meant to affirm the Jewish people’s ties to Jerusalem. On Wednesday, Israel recalled its envoy to UNESCO to protest the cultural heritage body’s passage of two resolutions this month noting only Muslim ties to the Temple Mount.

“I love Israel and honor and respect the Jewish faith and tradition, and it’s important that we have a president who feels the same way,” Trump, the Republican presidential nominee, also says in the video.

Last month, Trump said unless he is elected, Israel will be destroyed by the nuclear deal signed by Iran and six world powers, including the United States. He blamed President Barack Obama and his Democratic rival for the presidency, former Secretary of State Hillary Clinton, for the deal.

“Donald Trump and I stand with Israel because Israel’s fight is our fight, because Israel’s cause is our case,” he says. “Like the U.S., Israel is hated by terrorists and the failed states that support them. She is hated by too many progressives because she is successful and her people are free.”

“As Israel takes the curses, the slanders and lies of the world and turns them into blessings, the real question is: How could any good person not stand with Israel?” he says.