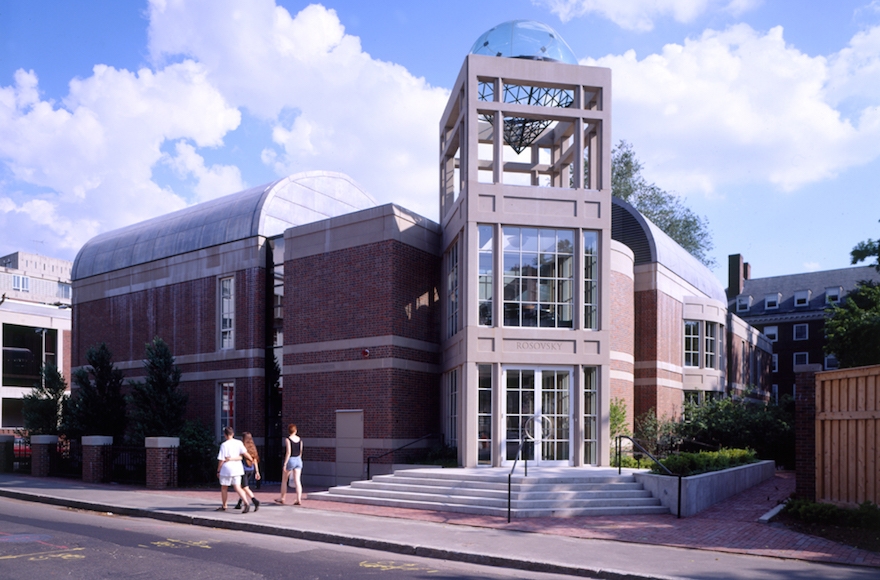 CAMBRIDGE, Mass. (JTA) – When Harvard University students Gabe Hodgkin and Grace Evans started the new school year, they had no way of knowing they’d be spending a good deal of their time on picket lines and at union rallies.

But a strike by the university’s 750 dining hall workers struck a deep chord with the two undergraduates, who are active in the Harvard Hillel.

Before the university and the union reached a tentative five-year deal early Tuesday ending the three-week strike, Hodgkin and Evans, as well as rabbis from the Harvard Hillel, said that Jewish values are at the core of their sympathy for the workers, including those at the Jewish student organization’s Rabbi Ben-Zion Gold Kosher Dining Hall.

Negotiations between Harvard and Unite Here Local 26, the union that represents the dining hall workers, began in May but broke down over salary and health insurance. Brian Lang, president of the union representing the workers, told The Boston Globe that the university agreed to demands for a minimum full-time salary of $35,000, no increases in health insurance costs and compensation for employees who are laid off during the summer.

For Rabbi Dani Passow, who leads Orthodox services at the Harvard Hillel that include about 40 students, the strike resonated personally. In an opinion piece published in The Crimson, the student daily newspaper, Passow recalled that his grandparents, who were Holocaust survivors, were able to build secure lives in America working their way up in the grocery business, eventually owning a restaurant of their own. The rabbi wrote that his grandfather relayed the importance of treating his own employees fairly.

In a letter published in The Crimson, Siegel called on Harvard to follow its tradition of creatively solving the legitimate needs of its lowest paid workers. 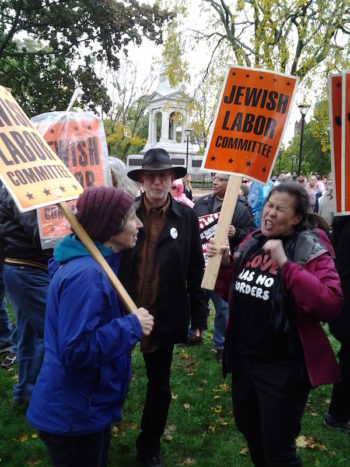 A contingent of supporters from the New England Jewish Labor Committee rallying in support of Harvard’s dining hall workers in their strike against the university before a tentative deal was struck, Oct. 22, 2016. (Penny Schwartz)

Passow wrote in an email on Tuesday evening, at the end of Simchat Torah: “I’m happy for all parties that this dispute has been resolved, but I’m sure being on strike for three weeks has been especially anxiety provoking” for the dining hall workers.

“I also miss them and look forward to having those who work at the Hillel dining hall back in our building serving our community with tremendous dedication and care,” he added.

The kosher dining hall at Hillel remained open during the strike, staffed by Harvard dining services management. A local kosher caterer, Andrew Wiener, delivered about 120 to 150 kosher meals there daily during the strike.

Harvard Hillel is the oldest kosher food service in the Boston area, going back to the 1960s, according to Rabbi Zalman Krems, director of KVH Kosher, which oversees Harvard’s kosher certification.

“Jewish law has a lot to say about labor disputes,” Krebs said. “Both sides are probably right. We just hope it ends soon. Kosher students don’t have options to go somewhere else. It’s hard for them to get their day-to-day needs met.”

In an email before the strike was settled, Harvard spokeswoman Tania deLuzuriago wrote that the current hourly wages, on average about $22 an hour, were at the top of the market in Greater Boston.

The parties were in talks with a mediator on Sunday afternoon, according to Lang.

Last Friday afternoon, shortly before a long weekend that would include the holidays of Shemini Atzeret and Simchat Torah, Hodgkin, who grew up across the Charles River in Brookline, was among about a dozen students eating lunch in the kosher dining hall and in the large sukkah set up in the courtyard designed by the building’s architect, Moshe Safdie.

“Participating in the picket lines has been part of my religious practice during the holidays,” he said.

Hodgkin delivered a Yom Kippur d’var torah, a talk that related the holiday’s haftarah reading of Isaiah 57:14-58:14 to the strike.

As Hodgkin sees it, ensuring equity and creating a healthy community are values shared by both the Jewish community and by Harvard. He acknowledged that he was disappointed with Harvard when it appeared the administration fell short of such values.

“It’s part of why I’m involved, to make sure that we do live up to those ideals,” he said.

“I am so inspired by the dining hall workers, who put everything on the line for 20 days to stand up for their rights. When we fight, we win,” Hodgkin wrote in an email.

In a phone conversation, Passow said that the empathy many students felt with the strikers is due to the close personal relationships that form with the dining hall workers.

“These are some of the first people on campus to know our names,” he said. “They show up for us every day and they check in with us to make sure we are doing OK.”

Hodgkin recalled some dining hall workers camping out overnight during severe snowstorms two years ago to make sure students had meals.

Hodgkin and Evans, one of the New England Jewish Labor Committee’s campus initiative fellows, joined a contingent from the group at a rally and march on Saturday to support the strikers.

Evans, who grew up in Rehoboth and attended synagogue in nearby Providence, Rhode Island, described one of the most beloved of the dining hall workers at Harvard Hillel. 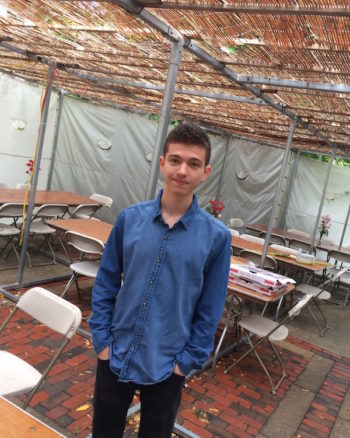 Evans had discussed the labor issues with Jack since before the strike, and she recalled that he was worried about the others who may earn less than him.

After every Friday night Shabbat dinner, the Hillel dining hall workers come out from the kitchen to a round of applause, Evans said, adding: “It’s a very special Jewish event for me.”

At a previously scheduled Sukkot program at the Harvard Hillel held in conjunction with the Jewish Labor Committee, dozens of Harvard students and others met and heard from several striking dining hall workers and their family members, including Anabela Pappas, who has worked for Harvard Dining Services for 35 years.

In a phone conversation, Pappas told JTA that she was moved by the welcome she and other strikers received — from people of all faiths, she noted.

She was pleasantly surprised to reunite with a Harvard alumna who used to eat at the dining hall where Pappas works. Pappas remembered setting aside kosher meals for the student.

A mother with Type 1 diabetes, Pappas was especially concerned that the proposed health insurance changes would not be affordable for the dining hall workers.

An immigrant from Portugal, Pappas became involved in the union as a way to help other workers have a voice, she said.

“In America, you have the right to fight for what you believe in,” she said.