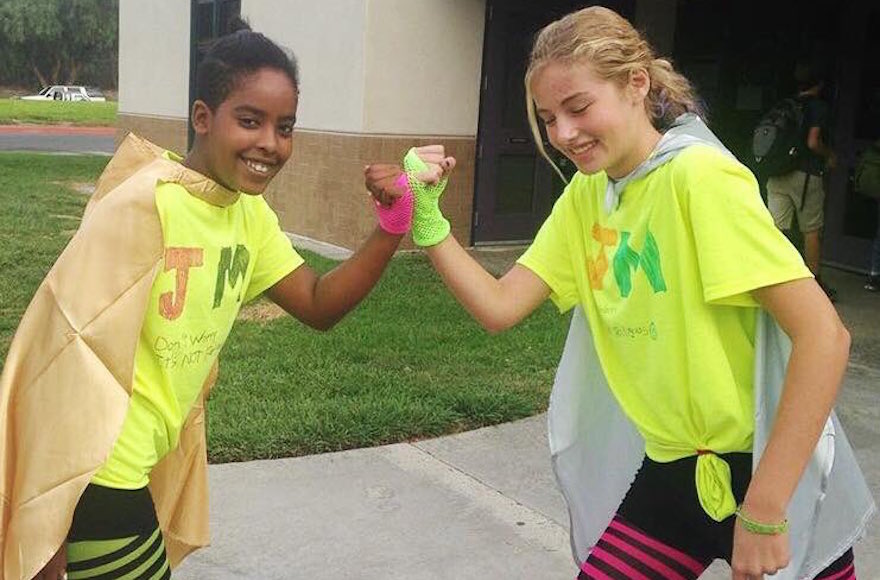 Casey Pearlman, who is Jewish, and her friend Yasmin Idris, who is Muslim, dressed up as "Juslim" superheroes for Halloween 2016. (Twitter)
Advertisement

(JTA) — A photo of two teenage girls from California, one Muslim and one Jewish, who dressed up for Halloween as the superhero team “The Juslims” has gone viral.

It was accompanied by the post: “My daughter is Jewish. Her best pal is Muslim. For Halloween they created a superhero team: The Juslims. I’ve rarely been more proud. Truly.”

My daughter is Jewish. Her best pal is Muslim. For Halloween they created a superhero team: The Juslims. I've rarely been more proud. Truly. pic.twitter.com/zqPCCwzshR

The name of Casey’s friend is Yasmin.

In a blog post published Sunday, Jeff Pearlman explained: “This is my daughter on the right, and her pal on the left.

”My daughter is being raised Jewish.

“Her pal is being raised Muslim.

“For Halloween, they recently decided to be the Juslims. This was not a political statement or a social statement or a stance on the presidential election. They weren’t doing it in the name of religious pride or America’s diversity or equality for all.

“Nope, they decided to be the Juslims simply because it was funny.”

Pearlman added that he hopes the point is not lost on those who are liking and sharing the tweet.

“My daughter and her pal are, simply, friends,” he wrote, adding: “We are all Juslims.”

The teens told BuzzFeed news that the term “Juslims” was suggested last year by Jeff Pearlman, a sports reporter and writer, while they were discussing things that their two religions have in common.