In Austria, an annual cleanup of a Jewish cemetery on a Catholic holiday 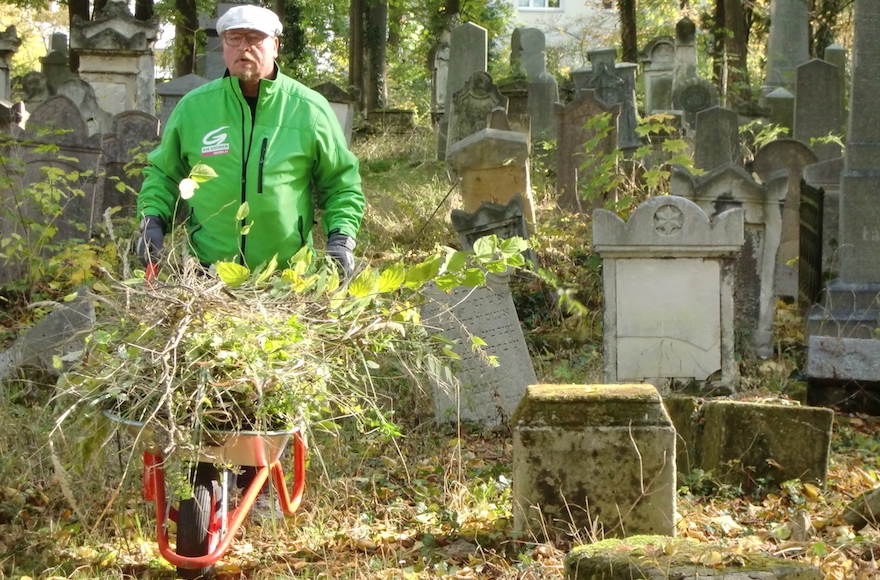 (JTA) — As she prepared to take inventory of one of Vienna’s oldest and least-known Jewish cemeteries, historian Tina Walzer anticipated many genealogical twists and archaeological challenges.

But upon entering the Waehringer Cemetery in 2008, Walzer quickly saw that before she could even begin her research, she would first need to solve a more practical problem: The headstones she sought to catalog were hidden beneath a tangle of thorns and climbers. It was as if a jungle had swallowed up the entire five-acre graveyard.

In a country with a Jewish population that had virtually disappeared following the rise of Nazism, Walzer recruited a small army of non-Jewish volunteers. For weeks they toiled to reverse decades of neglect at the crumbling cemetery, whose eclectic collection of headstones includes some prominent Jewish names who helped build modern Vienna.

“When we finished clearing the place, we just couldn’t let the vegetation grow back and erase our hard work,” recalled Walzer, 47, who is Jewish.

With the help of a few friends, she initiated an annual community cleanup. That year — and every year since — hundreds of volunteers groom Waehringer Cemetery on All Souls’ Day, the Catholic holiday on Nov. 2, when millions of Austrians tend to their relatives’ graves.

Her campaign resulted in the first comprehensive study of a major heritage site of Central European Jewry. And it became one of the continent’s most successful and sustained grassroots initiatives to preserve neglected Jewish graves.

This year, some 250 Austrian non-Jews showed up on Tuesday, which was actually All Saints’ Day, a time when Catholics celebrate the Church’s saints, though this year’s change was due to a scheduling (and not ideological) shift. Many arrived with their own gardening equipment in hand and convened at the heavy wooden gate of the 233-year-old cemetery.

The project has been kept alive in part due to the involvement of the local Green Party, as well as the national media that advertise the Jewish cemetery initiative each fall. 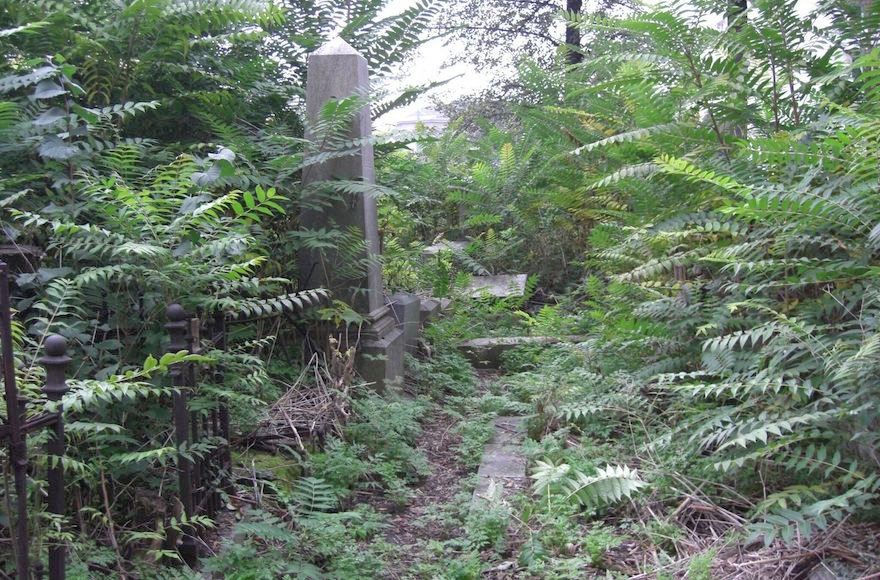 “It’s so interesting to read on these headstones names that everybody knows,” said Niki Kunrath, a 56-year-old Waehringer regular who began volunteering through the Green Party.

Kunrath cited the Austrian railroad builder Heinrich Sichrowsky and the Epstein family of entrepreneurs, who helped build the famed Ring Road – a boulevard that the City of Vienna somewhat subjectively crowned “the most beautiful in the world” and which houses the Imperial Palace, the Arts History Museum, the Natural History Museum and the Vienna State Opera.

All Souls’ Day is, for some volunteers, a rare opportunity to admire the final resting place, normally closed to the public, of such Austrian heritage giants – the local equivalents of Frank Lloyd Wright or France’s Georges-Eugène Haussmann.

Ultimately, though, volunteers like Kunrath volunteer here because “no one else is going to do it,” he said.

“The people buried here have no one because their families were murdered,” he said. “So, for me, coming here and cutting thorns is more important than lighting a candle on my own family’s graves.”

Some volunteers bring their children to help, but the work is intensive.

“You end up with blisters, but I should be OK because I’m wearing two pairs of gloves,” said Andreas Ohner, a 50-year-old volunteer who was born in the Vienna suburb of Baden bei Wien. Like many other volunteers, he regards the work at the cemetery also as a form of protest against Austria’s rising far-right government.

In May, a left-wing politician beat the presidential candidate of the far-right Freedom Party — whose critics accuse him of encouraging racism and the veneration of Nazism — by a minuscule 31,000-vote edge. But the vote was nullified amid irregularities, and a second election is scheduled for next month.

The success of the Waehringer initiative coincides with major progress in efforts to preserve Jewish cemeteries in Europe, especially in the eastern part of the continent, where they are particularly threatened by vandalism, theft and unregulated land usage.

In Ukraine, Poland, the Czech Republic, Belarus, Serbia and Moldova, a German-funded pilot program known as the European Jewish Cemeteries Initiative has preserved at least 70 graveyards since its launch in 2015 with an initial budget if $1.35 million. But even that initiative, which also engages local volunteers, is a minor one, considering the continent is dotted with thousands of Jewish cemeteries. Those graveyards, the Council of Europe said in 2012, are “probably” more at risk of abuse than any others. 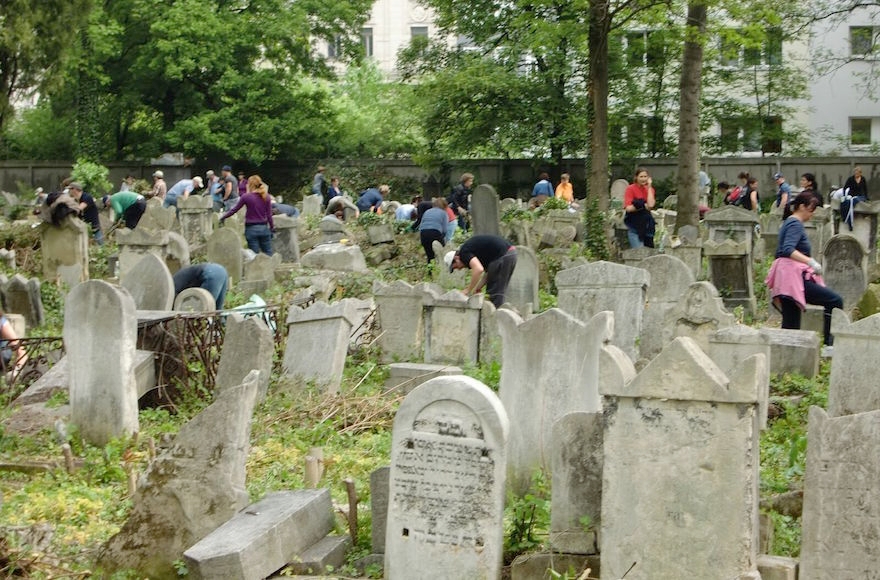 Poland and Slovakia alone have more than 2,000 Jewish cemeteries between them, many of them in disrepair. Just the fencing for all of Poland’s 1,400 Jewish cemeteries would cost approximately $32 million, according to the country’s chief rabbi, Michael Schudrich.

To Walzer, though, who has spent hundreds upon hundreds of hours between the Waehringer Cemetery’s paths, the graveyard is much more than a pin on the European map of rescued cemeteries. The diversity of its headstones tells the history of Viennese Jewry, from its humble Sephardic origins — reflected in headstones that are little more than stone slabs — to the elaborate temple-shaped sepulchers favored by Reform Jews in the 19th century.

The graveyard also has darker stories, full of betrayal and cruelty, like the exhumation of 400 graves in 1942 by Vienna Natural History Museum researchers who handpicked the remains of prominent Jews in a bid to prove their crackpot race theories. The Nazi researchers were able to locate the bodies with the help of Benjamin Murmelstein, an Austrian rabbi who is controversial for his give-and-take negotiations with Nazis that led to the murder of some Jews and the rescue of others.

After the Holocaust, only 200 of those bodies were reburied in one of Vienna’s six other Jewish cemeteries. The remaining 200 bodies have never been found.

A final nasty twist came after World War II, when the City of Vienna refused to offer restitution for a half-acre that was torn off the cemetery and turned into public housing, with an attached parking lot, named for the Austrian-Jewish writer Arthur Schnitzler.

Still, even after the improvement achieved by Walzer and her team of volunteers, the Waehringer Cemetery is still in worse condition than some cemeteries in Central Europe’s poorer countries that, unlike Austria, were under communism.

“I can’t fully explain it, but it seems to me connected to a sort of an intellectual expulsion of Vienna’s Jews from recollection,” she said, “a collective amnesia that insulates many Austrians today from the flight or murder of 200,000 Jews.

“But I’m optimistic this will change the more we give back to people parts of their own history.”