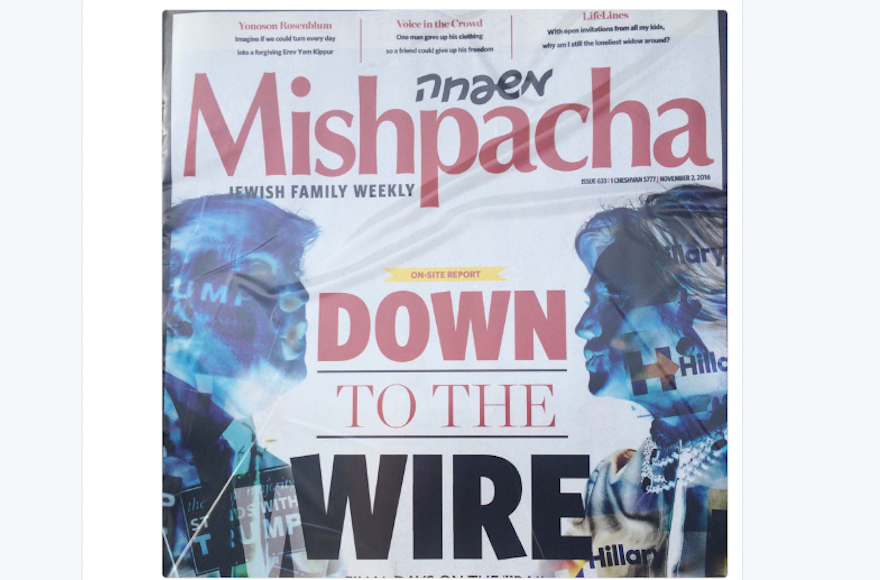 (JTA) – After one haredi Orthodox newspaper printed a photo of Hillary Clinton, a rival haredi paper accused it of breaking Jewish law.

Hamodia, a Hebrew paper in Israel, in an editorial this week denounced the decision by Mishpacha magazine, according to Yeshiva World News. Mishpacha, which is published in the United States and Israel, made history last week by being perhaps the first haredi paper to print Clinton’s photo.

The Democratic presidential nominee’s profile was seen opposite that of Donald Trump, her Republican rival, on the cover. Both candidates appear in negative exposure covered by their campaign’s symbols.

The editorial, screenshot by Yeshiva World News, suggested that a “true” haredi newspaper would not publish any photos of women, regardless of their position. Hamodia added that the decision not to print Clinton’s photo stemmed from concerns of protecting the modesty of women and has no bearing on whether haredim support her candidacy.

“There are no – there haven’t been, and there won’t be – any pictures of women in the true haredi press, not of those who have reached high positions of sovereignty and power in their countries, and also not pictures of women in Jewish life,” the editorial read. “These are our ways of life, these are the fences that surround them, and they don’t change, and aren’t connected to political circumstances.”

Sruli Besser, a contributing editor for Mishpacha, responded to the editorial in a biting, sarcastic letter to Yeshiva World News, writing that the magazine consulted with rabbis before printing Clinton’s photo.

“I’m so sorry that you don’t find us to be true chareidim,” the letter reads. “I thought hours of conversation and deliberation with real rabbanim [rabbis] would give us some credibility, but I guess not. I’m sorry that when we asked genuine gedolim and poskim [grand rabbis and Jewish legal authorities] how to proceed and followed their advice, we didn’t think to ask you what true charedi papers have always done.

“I’m much sorrier that you thought it wise to make this a public issue, because the charedim (true, not true, whatever) don’t need this story in the secular media.”

Haredi newspapers generally do not publish photographs of women, claiming that such photos would violate the woman’s modesty. In the past, haredi outlets have dealt with articles about Clinton either by erasing her from a photograph or printing a picture of her husband, former President Bill Clinton.

In 2011, the Yiddish-language haredi newspaper Der Zeitung airbrushed Clinton and another woman from the photograph of the White House Situation Room during the assassination of Osama bin Laden. In August, Yated Neeman, another haredi paper, printed a photo of Clinton waving to a crowd – with her face hidden by a podium.