At top Israeli university, students favor the least flawed candidate in US election 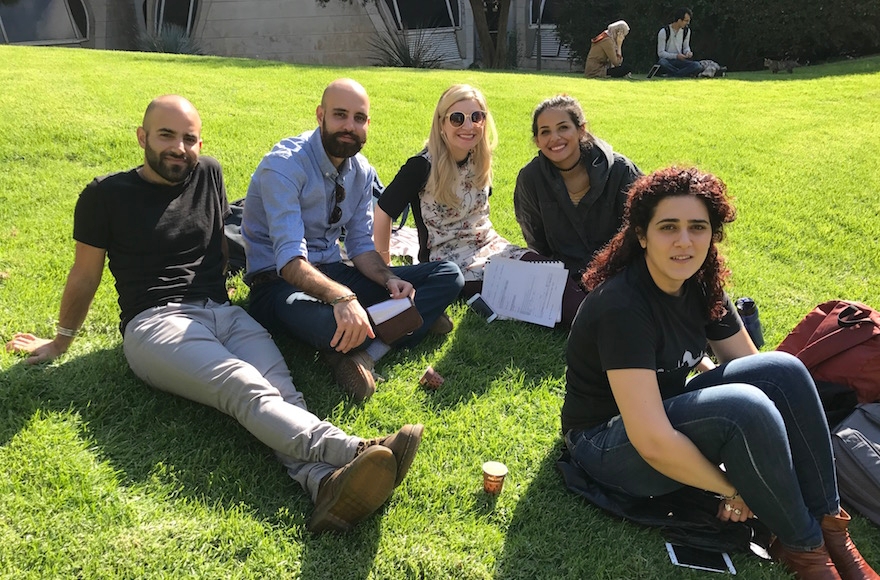 JERUSALEM (JTA) – As Americans prepare to elect their next president, Israelis are watching.

Students at the Hebrew University of Jerusalem, one of the country’s most prestigious institutions of higher education, are probably paying closer attention than most.

On Sunday, the day before the start of fall classes for most of the students, the Mount Scopus campus was quiet. Students hung out in the university’s cafes and snaking gardens. Some sat in diverse groups that included Arabs and Jews — an uncommon sight off campus.

More than a dozen students from a wide range of religious and political backgrounds spoke with JTA about the American election. Few expressed much enthusiasm for Hillary Clinton, the Democratic candidate. But it was hard to find anyone who would admit to preferring Donald Trump, her Republican rival.

Polls of Israelis have shown they prefer Clinton to Trump by a double-digit margin. Only on the political right does Trump get more support, and even then to the tune of less than 50 percent.

Tamar Hermann, who leads surveys for the Israel Democracy Institute think tank, including on the American election, said the controversy surrounding the vocal anti-Semites among Trump’s supporters and his perceived failure to decisively disavow them is likely dampening Israelis’ affection for him.

“The main thing that influences people here is a candidate’s attitude toward Israel and the Jewish community. They always look from this perspective,” she said. “It’s very difficult for them to look at world affairs in any other way.

“There are right-wing communities where you can find clear support for Trump. But the liberal atmosphere at university blurs that support. When they grow up, students may again be more influenced by the views of their community.”

Outside the Hebrew University administrative building, Maor Seri, a Jew, sat in the grass with his friend Ahmed Fahoum and a group of other Arab-Israeli students. All of them were sure Trump would be the next president of the United States.

Seri, 27, is working on a master’s degree in Jewish philosophy. Born and raised in Jerusalem, he described himself as religiously traditional and politically center-left, with a special interest in advancing the rights of Mizrahi Jews like himself. He was a medic in the Israeli army and now teaches Bible at a local high school.

He said he was dismayed by the political rise of Trump, whose “anti-democratic” rhetoric he once believed to be beneath the United States. But Seri said his experience suggests Trump will win the election.

“The language and the tone of the election are very low, like in Israel. I used to think in the United States, no one would dare say things like this,” he said. “It’s how right-wing leaders are coming to power all over the world, not just in Israel. I think it’s very dangerous.” 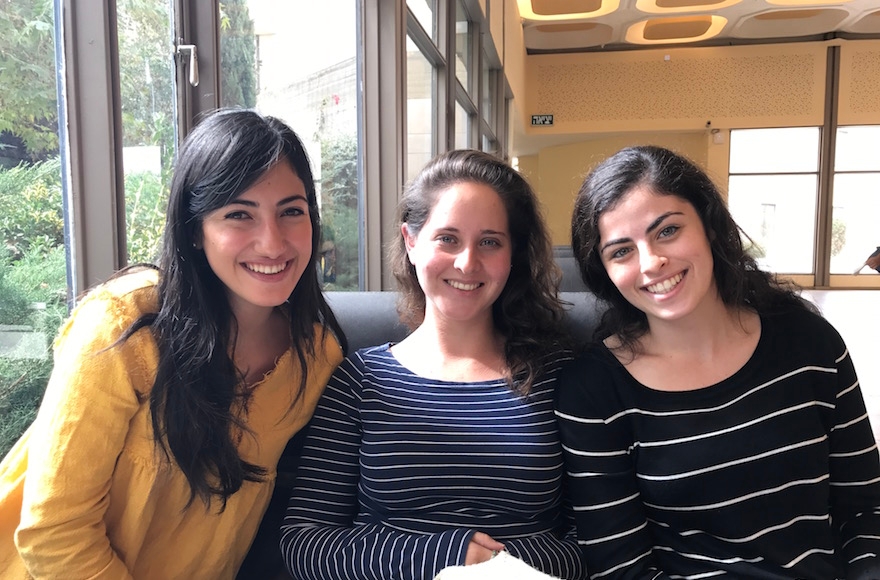 Fahoum, a 26-year-old graduate student and research assistant in Middle Eastern studies, agreed. A self-described left-wing secular Muslim, he grew up in eastern Jerusalem. Whereas his friends described themselves as “Palestinians,” despite being citizens of Israel, he said he considered himself a “Palestinian Israeli.”

He said he supports Clinton because “it’s the sane choice” and Trump is a dangerous “chauvinist, sexist liar.”

“I wanted to see Bernie Sanders there [as the Democratic nominee],” he said.

“My father is supporting Trump because he hates the United States,” he continued. “He knows if Trump gets elected, the U.S. will lose its leading role in the world.”

At a nearby cafe, four women were studying for an occupational therapy program. Two were Arab Israelis and the other two were religious Zionists. The Arab students — one secular, the other clad in a hijab — supported Clinton. The Jewish women said their families supported Trump, but they were unsure where they stood.

Shauna Dubitsky, 20, is from Beit Shemesh and works in customer service for the City of David, a controversial group that aims to increase the Jewish presence in eastern Jerusalem. Although religious women are exempt from army service, she did national service with at-risk children. An American citizen who moved to Israel with her family at age 6, she registered but ultimately did not vote.

“I think Trump is insane, but Hillary is not good for Israel. So I can’t make the call,” Dubitsky said.  “I don’t know the details, but all the stuff he’s said about women and Jews and minorities is upsetting.”

While Israel is the most important issue for her, she cares about the United States, too.

“My family is still there. But if it were up to me, they’d all move here,” she said. “Anyway, it would be nice to have America be what it should be.” 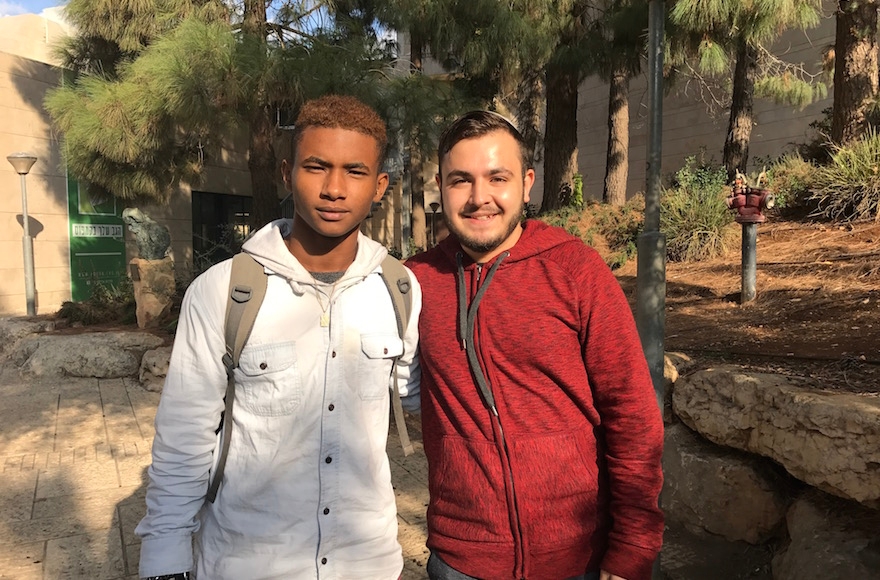 Roi Shtainkvit, 19, was having a cigarette with a friend. They are both taking a preparatory course for medical school ahead of their army service. Shtainkvit is an Orthodox Jew and lives in Beit Shemesh with his family, where he works for a catering company. He described himself as a political centrist.

“I support Hillary. There is nothing special about her. Trump is just a little crazy. I’m afraid of what he’ll do to the United States and that it will affect the world,” he said. “The Democrats are always good for Israel.”

Trump becoming the presidential nominee, he said, was like a tiny far-right political party winning half the Israeli vote. Shtainkvit said he was not alone in his opposition to Trump in his Orthodox community, and that many of his family members and friends felt the same way.

“All our teachers hate Trump,” he added.

Neta was sitting outside on the grass with a friend. Uniquely, she was more than willing to tout a Trump presidency — albeit without providing her last name. A 22-year-old secular Jew from Jerusalem, she is studying history. She served in an intelligence unit of the army.

Like President Barack Obama, she said, Clinton lacks a plan for dealing with Islamic terrorism and refuses to even use those words to describe it.

(Obama has suggested the term “Islamic terrorism” unnecessarily vilifies Muslims. Clinton has said she is “happy” to say “radical Islamism,” but that “it matters what we do more than what we say.”)

Asked about Trump’s controversial remarks about women, including the audio recording of him bragging about sexually aggressive behavior toward them, Neta said the controversy was overblown.

“I knew he was a bit sexist and chauvinist even before the election because I watched ‘The Apprentice.’ But he would be a good president,” she said. “I think every Israeli prime minister in the past did things that today we would call sexual assault.”

When her friend protested that Trump was an “extremist,” Neta said Meretz, the left-wing party he supports, was too.

Haim Isaacson, a 25-year old computer science major at the Open University, was studying in the Hebrew University library. He is haredi Orthodox and lives in Beit Shemesh. Like most haredi men, he did not serve in the Israeli army. But he plans to join the half of that demographic that works rather than studying full time at a yeshiva.

Isaacson said he does not follow politics and will not vote in the presidential election despite being an American citizen.

Asked if he was worried by the prospect of Trump winning, he said, Talmudically, “Yes and no. America is always up for new things. It could go either way.”