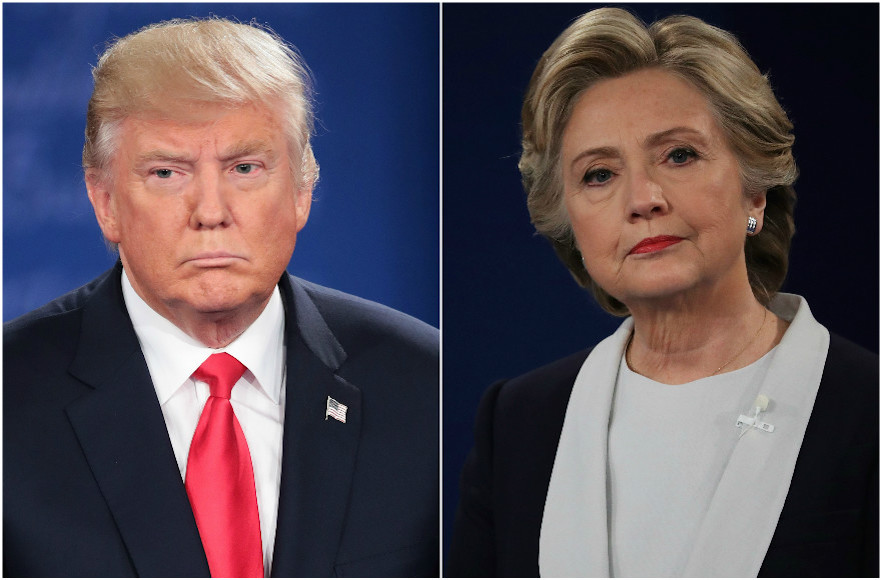 WASHINGTON (JTA) — Seventy percent of Jewish voters favored Hillary Clinton in the presidential election, with 25 percent opting for Donald Trump, according to a poll.

The national survey, which was commissioned by J Street, the liberal Jewish Middle East policy group, again showed a community that trends more Democratic than the general population.

Clinton and Trump drew almost even in the popular vote in the balloting Tuesday – the former secretary of state edged her Republican rival slightly — but Trump scored a decisive victory in the electoral college vote.

Jim Gerstein, the pollster, said Jews continued to remain unstinting in their support of the party.

“They voted for Clinton more than Hispanics did, more than any other religious group, including no religion,” Gerstein said.

Trump’s percentage was less than the 30 percent garnered in 2012 by Mitt Romney in his loss to incumbent President Barack Obama, but commensurate with the 24 percent won by President George W. Bush in 2004.

The economy led Jewish voters’ concerns in the poll, with 35 percent of respondents listing it as their first or second priority. Tied for second at 27 percent were health care and terrorism. Israel scored ninth, at 9 percent.

Those figures are typical when both candidates in an election are seen as basically supportive of Israel.

The numbers were similar in a Florida poll — 68 percent for Clinton and 28 percent for Trump — and voters there scored similar priorities. Trump narrowly won the state.

J Street conducted the Florida poll in part to see if last-minute pushes by presidential campaigns in the state in recent elections emphasizing hawkish pro-Israel credentials were justified by a community likely to rate Israel higher. But the results were virtually the same, with Israel rating ninth at 8 percent.

J Street’s poll was conducted by Gerstein Bocian Agne on Election Day and reached 731 self-identified Jews whom the pollster invited from among 3 million Americans who belong to a web-based panel. It has a margin of error of 3.6 percentage points.

The Florida poll reached 500 self-identified Jews through cellphones and landlines, also on Election Day, and had a margin of error of 4.4 percentage points.