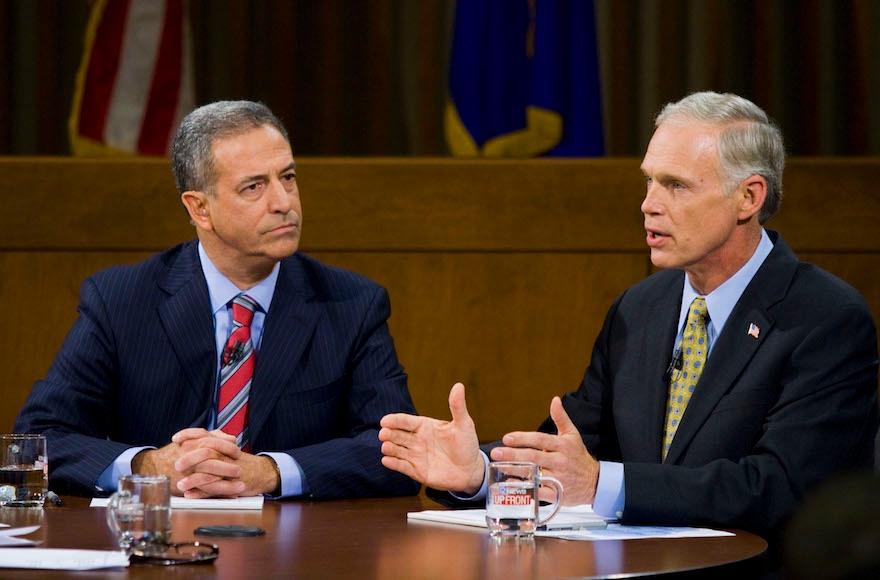 Feingold was upset in a bid to reclaim his seat, losing to the incumbent, Republican Sen. Ron Johnson, who received 51.8 percent of the vote to Feingold’s 45.5 percent. Feingold called Johnson shortly after 11 p.m. Tuesday to concede.

“I’m sorry we didn’t get the job done,” he told supporters in his concession speech, the Wisconsin Star-Tribune reported.

“Obviously something is happening in this country tonight. I don’t understand it completely. I don’t think anybody does,” Feingold said, adding: “This could be one of the most challenging times in the history of our country.”

Feingold was a three-term senator swept aside in 2010 by Johnson, a Tea Party candidate.

Duckworth, who was backed by J Street with more than $145,000, has been an enthusiastic backer of the agreement reached last year between six world powers, led by the United States, and Iran.

The state of Illinois gave its 20 electoral votes to Clinton.

Toomey kept his seat, fending off a spirited challenge from Democrat Katie McGinty. The Republican Jewish Coalition conducted a campaign attacking McGinty in the tight Senate race for her “dangerously naive” support of the Iran deal. J Street spent nearly $250,000 in an attempt to unseat Toomey.

Trump rallied to win Pennsylvania and its 20 electoral votes.

In Florida, Rubio was re-elected with some 52 percent of the vote to 44 percent for two-time Democratic Rep. Patrick Murphy. The state’s 29 electoral votes went to Trump.

Rubio, who entered the race in June after saying he would not run for re-election, has backed an array of pro-Israel initiatives in Congress. Most recently he would not sign on to a letter circulated by AIPAC calling on Obama to refrain from lame duck pressure on Israel because it explicitly called for a two-state solution, a position that the right-wing pro-Israel community has been pressuring the Republicans to play down. Right-wing pro-Israel activists hope his re-election will herald a bid for the presidency in 2020.

In Georgia, Republican incumbent Sen. Jonny Isakson defeated challenger Jim Barksdale, a Democratic multimillionaire who toured the West Bank in 2010 with Interfaith Peace Builders, a group that has ties to the Boycott, Divestment and Sanctions movement against Israel. The state of Georgia went for Trump.

In Missouri, incumbent Republican Sen. Roy Blunt won with 49.4 percent of the vote to 46.2 percent for Democratic challenger Jason Kander, 35, a Jewish military veteran who served in Afghanistan.