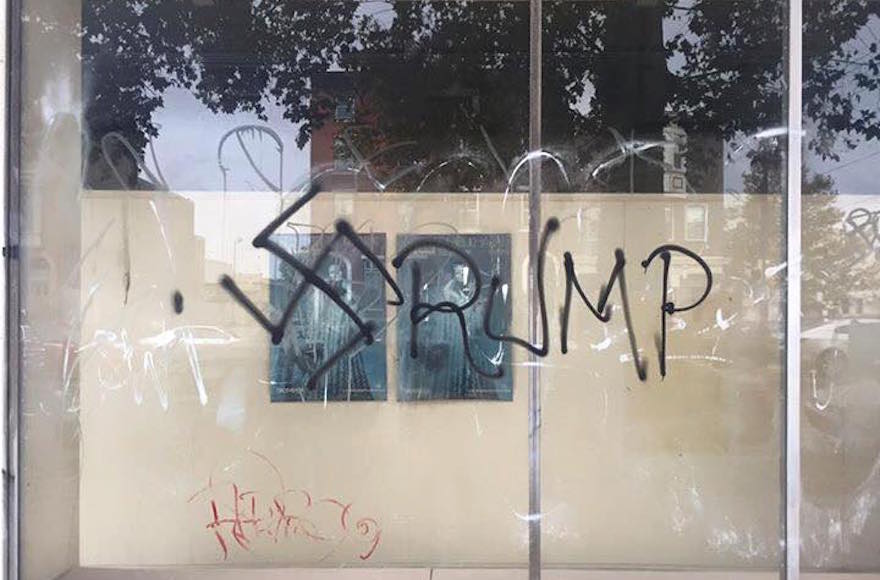 (JTA) — Graffiti with Nazi imagery and the word “Trump” were discovered in Philadelphia on the same day that Donald Trump won the presidential election.

The graffiti was spotted Wednesday on a South Philadelphia storefront, Philly.com reported. Police are investigating.

One image included the worlds “Sieg Heil 2016,” a reference to the German Nazi greeting. Another showed the word “Trump” with the T replaced with a swastika.

There were additional reports of similar images as well as other racist graffiti in South Philadelphia, according to Philly.com.

“The acts of political and racial vandalism that occurred this morning in South Philadelphia must be condemned in the strongest possible terms,” he said.

“Swastikas and the Nazi salute send a message of intolerance and hate to the entire community,” Nancy Baron-Baer, the ADL’s regional director, said  in a statement. “The fact that today is the 78th anniversary of Kristallnacht adds another layer to this already sickening act.”

Wednesday is the 78th anniversary of Kristallnacht, the “Night of Broken Glass” pogrom in 1938 against Austrian and German Jews that many Holocaust historians view as the opening shot in the Nazi-led campaign of violence against the Jews.